Add a little detective drama to a fun, imaginative urban fantasy (arguably rural fantasy, as its real-world elements take place largely in the quiet Lincolnshire landscape) exploring the afterlife, memory, identity and justice, and what you get is Adam Simcox’s The Dying Squad. Even faced with the sight of his own body, DI Joe Lazarus doesn’t want to accept that he’s dead. When he finds himself in purgatory (otherwise known as the Pen) however, and tasked heading back to the mortal plane to investigate his own murder, he’s forced to acknowledge the truth. Setting out with his new partner Daisy-May – also dead, and decidedly cheeky – on the trail of the drug gang he was tracking before his death, he’s hindered by the fact that, beyond the basics of his core identity, he can’t remember much, if anything, about his life, his friends and family, or his original investigation. 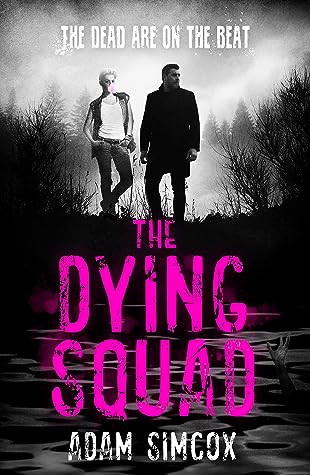 After a slightly slow start full of existential angst as Joe rails against the truth of his situation, he’s rapidly introduced to the Pen, the Dispossessed souls caught there between heaven and hell, the Duchess who rules as the Warden of the Pen, and the existence of the Dying Squad – souls tasked with finding justice for those whose crimes went unsolved in the living world. There’s a lot to take in, but the story kicks into gear as Joe learns the terms of the deal he’s being offered – secure a place in heaven by finding out who’s responsible for his murder, or else be forever trapped in the Pen – before making a start on his investigation. The frustrating absence of memories for both Joe and Daisy-May, what that means for their sense of identity and how they mitigate against it, quickly becomes a fundamental driver of the plot, keeping the reader guessing and gradually revealing the truths behind both characters. As the rules of the setting (i.e. how this sort of afterlife works, and how it fits in with heaven and hell) become clearer too, the danger ramps up and the stakes become bigger than just a case of getting into heaven.

The core concept is a brilliant idea, and there’s a lot here that’s wonderfully imaginative and great fun to read about. Perhaps because there are so many ideas flying around though, it does at times feel like a book that isn’t entirely sure what it wants to be – is it a supernatural police procedural? An expansive modern fantasy? A noirish character study? In truth it’s all of those things in a combination that largely works, but not flawlessly; the actual investigation is a touch one-dimensional, at least some of the twists and revelations are a bit telegraphed, and with all the (admittedly smart and frequently intriguing) world building going on a couple of the character beats towards the end feel a bit rushed. Thankfully, the relationship between Joe and Daisy-May is easily strong enough to carry the story along, and it’s as much fun reading their zingy, witty dialogue as it is learning more about who they are – and were – even as they’re rediscovering their memories and past lives themselves.

So if the tone is a bit uneven in places and the crime/fantasy elements don’t always feel like they fit together properly, there’s still more than enough going on here for it to be consistently entertaining, and as the story progresses the whole thing gradually begins to gel a bit more. By the end, while it’s clear that Simcox is setting things up nicely for a sequel, it’s easy to forgive him that – with (most of) the mysteries out of the way and the characters fully realised, the journey up to that point now makes a lot of sense, and for the most part feels genuinely satisfying. It’s definitely more fantasy than crime, but the central idea of the Pen and the Dying Squad is smart and well thought-out, with considerable scope for further development. If you’re on the lookout for a modern urban (/rural) fantasy with a fun angle on the afterlife – and a dash of crime added in – then you could do a lot worse than check this out.

Many thanks to Gollancz and Adam Simcox for providing me with an advance copy of The Dying Squad, in exchange for my honest review.