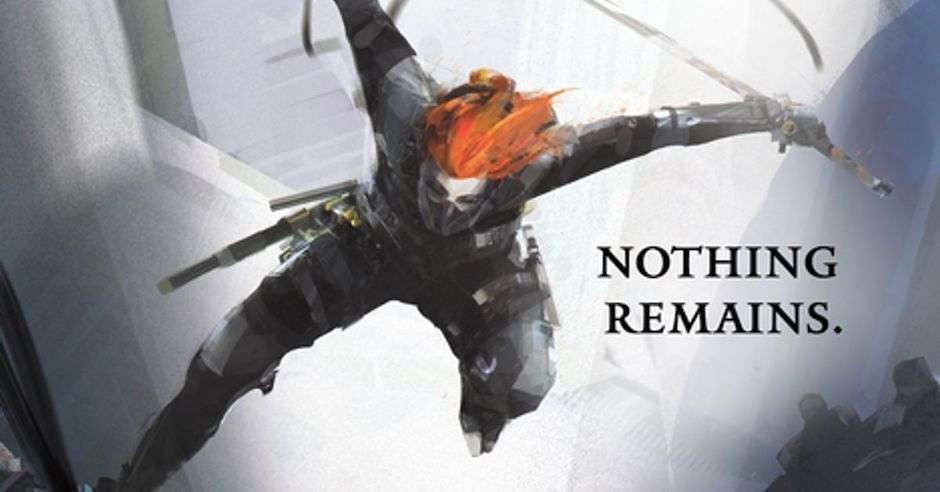 Brian Staveley’s The Empire’s Ruin is a solid and enjoyable return to the dark and vivid world of the Chronicle of the Unhewn Throne series. In the first novel of his new trilogy, Staveley follows old and new characters as they fight for survival in an increasingly hostile world. I received an ARC of The Empire’s Ruin in exchange for an honest review.

“Half the people in this city would gut us on sight, and the other half would only hold back in order to feed us to their blood-hungry so-called gods. If we wanted to be safe, we would have taken up brewing or farming or fucking haberdashery.” 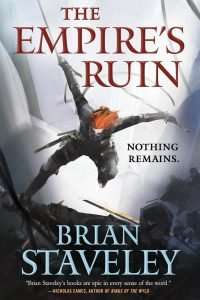 The Empire’s Ruin is satisfyingly hefty at 752 pages. Within these pages are 363 individual instances of the word “fuck,” so foul-mouthed readers will feel right at home with the constantly cursing characters. Readers unfamiliar with Staveley’s earlier novels are strongly encouraged to read those before picking up The Empire’s Ruin. This review contains spoilers for the Chronicle of the Unhewn Throne original trilogy and stand-alone work, Skullsworn.

Five years after the explosive events of the original trilogy, the Annurian Empire is still reeling in the wake of devastating war and civil unrest. The tools it once used to dominate the breadth of its lands, including the airborne fighting force of Kettral, have been severely compromised. The Emperor sends one of the few remaining Kettral on a quest beyond the end of the known world to find the mythical nesting ground of the giant war hawks that could turn the tide to save the Empire. Meanwhile, an ancient and powerful enemy is rising once again and seeks to threaten the balance of the world.

All of Staveley’s full-length novels have the same setting and excellent world-building: a rich, interesting, and dark world with many unexplored corners. Constant returns to the same setting can feel repetitive or diminishing in the wrong hands, but Staveley finds a way to deepen existing mythology and setting. Staveley’s continued depiction of Dombâng, likely inspired by Southeast Asian culture, feels deeply developed, especially considering Dombâng’s fraught experience with imperialism and subsequent difficulties that echo the real-world history of the area.

The pace throughout the novel is satisfying and consistent, while the prose is vivid. Constant battle scenes can wear on a reader, but Staveley’s strength lies in painting a picture while leaving enough room for the reader’s imagination to fill in the gaps. The action and battle scenes in The Empire’s Ruin feel stylized and cinematic, similar to those of Joe Abercrombie.

“To destroy is to swim with the current of reality. Once a thing is shattered—and this applies to people as well as castle walls—once a thing is broken, the world rarely allows for it to be put back together. Not the same way, at least.”

The Empire’s Ruin alternates from the point of view of Kettral fighter Gwenna Sharpe, priest Ruc Lakatur Lan Luc, and lapsed monk Akiil. Staveley admirably peoples his stories with diverse characters of varying backgrounds. Each POV character has to remake themselves in some way in order to move forward. Much of this novel and indeed the rest of the series is devoted to identity and the destruction and rebuilding of the self. One of the most intriguing depictions of this theme is in a jungle where a mysterious disease has been released that mutates all living things within its borders. Some trees have grown fruit in the shape of humanoid corpses, while others have eerie sheaves of flowing hair. Fans of the alien settings of Annihilation will enjoy this similarly unusual setting.

As other reviewers have noted in the past, Staveley’s handling of female characters can be uneven. In the original trilogy, Gwenna is written as a bit of a stereotype of a red-headed woman: hot-tempered, impulsive, and brash, she’s even a master of explosives. The newest novel gives Staveley room to expand Gwenna’s personality. Indeed, Gwenna’s story arc aligning with a traditional hero’s journey feels the most compelling of the three perspectives in the novel.

Gwenna’s scenes in the mutated jungle—young girl and military companions in tow—while being hunted by a horrific beast, strongly evoke beloved sci-fi classic Aliens. Gwenna, like Ripley, is a strong woman who has been broken down and built back up. Gwenna must protect a young girl, nicknamed Rat, as they fight for safety and their companions are picked off one by one.

However, Gwenna’s story does have problematic aspects. Gwenna is “not like other girls,” elevated to often-superhuman levels. She frequently survives the unsurvivable, kills the unkillable more than once, and curses with the best of them. At least she doesn’t remain unrealistically good-looking throughout or have a shoehorned love interest.

The most glaringly problematic issue is when Gwenna is the only woman selected by Emperor Adare to go on a dangerous mission that involves a lengthy sea voyage. Though Gwenna is accustomed to being “one of the guys,” Staveley frequently draws attention to the fact that many of the large crew would not hesitate to rape and/or injure her if given the chance. The implausible, bordering-on-offensive plotline that a female emperor would casually place such violent, misogynistic men on a vital mission with a lone strategically important woman may alienate readers.