REVIEW: The Escapement by Lavie Tidhar

Lavie Tidhar’s The Escapement is the story of a father’s hopelessness as his son lies dying in a hospital.  The story shifts back and forth between his real world agony and the darkly fantastic land known as the Escapement.  There he takes on the role of the Stranger, a gunslinger seeking the healing flower Ur-Shanabi.  The Escapement takes us to a surreal wild west landscape peopled with mythical beings, stone colossi, demonic shadow beings, and of course… clowns?  As the Stranger pursues his quest for the flower, he befriends the card playing Kid, crosses paths with members of the Major Arcana of the tarot and becomes drawn into the war known as the Titanomachy. 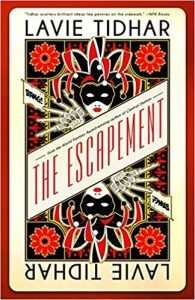 The Escapement is a quick read at about 250 pages, and had a YA feel.  The prose is direct and generally simple, which isn’t necessarily a bad thing.  This would be a good book for a long flight or to kill time in waiting rooms.  There’s not much in The Escapement to make you stop and think, and there’s not much need to return to previous sections to enhance the meaning or understanding of what you’ve just read.  Again, this isn’t necessarily a bad thing, it’s just that The Escapement doesn’t have a great deal going on below the surface of what’s printed on the page.

The most interesting feature of The Escapement is the world itself.  Tidhar does a good job of creating a surreal world that feels as though it exists on its own, instead of simply being a backdrop for the story of the Stranger.  The Titanomachy, for example, feels like an ongoing thread in this world that began long before the Stranger’s journey, and will continue long after.  At the same time though, some of the surreal aspects of The Escapement fall flat.  In this wild west world, clowns play the role of native Americans.  While this does tie in to the world of the father and son, Tidhar does little with it aside from one very memorable section involving a cameo by John Wayne Gacy as Pogo.

The Escapement puts itself into a no man’s land of references and allusions.  It seemed as though Tidhar couldn’t decide whether to make allusions or direct references, and instead tried to do both.  For example, I felt very clever when I picked up on his reference to Gacy as Pogo.  But Tidhar stole my thunder when the Stranger called him by name.  Tidhar even goes so far as to list all his references and allusions in his Afterward, as if afraid the reader might have missed something.  I felt a little beaten about the head by that.

The Escapement isn’t a bad book.  I finished it, and I’m not someone to make myself finish a book I dislike.  As I mentioned, it’s a short and easy read.  While I wouldn’t try to talk someone out of reading it, I wouldn’t either suggest it to someone.  I would read further stories set in this world because the potential is there, The Escapement just didn’t quite get there.

Read The Escapement by Lavie Tidhar