The Goblin Emperor by Katherine Addison is many things; a novel about elves and goblins, a story with mages and magic, and a book with a steampunk aesthetic. Yet, these belie what the novel is at its heart: a coming-of-age story filled with political intrigue. There is action but it is not central. Magic exists but plays a minor role relegated to the background to fill out the world. The Goblin Emperor upends standard fantasy by shifting the importance of its components. Whereas intrigue, fish-out-of-water syndrome, and world-building often play second fiddle to action, monsters, and magic, Katherine Addison has flipped the script in this novel which, for all intents and purposes, makes for a story that shouldn’t work, but somehow succeeds.

“The reminder that other lives had tragedies without reference to his own was both salutary and painful.” 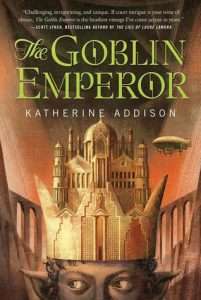 The Goblin Emperor starts with the main character, Maia, in his exiled residence from his neglectful father and the royal court. Maia is mixed in race, half-goblin and half-elf, with appearances leaning more toward the former. His father the emperor hates him on principle, as Maia was the result of an arranged and loveless marriage for political benefit, and thus sent both wife and son away into exile the first chance he got.

“Better to build new bridges, he thought, than to pine after what’s been washed away.”

Maia is technically an heir to the throne but is low on the list with siblings ranking far higher in terms of succession and favor. Yet, this comes crashing down when the emperor’s airship comes… er, crashing down, killing the entire family and leaving Maia as the de facto emperor. This moment is where the novel begins, but the cataclysmic start pulls back to reveal the details in Maia’s past as well as what he lacks.

“‘In our inmost and secret heart, which you ask us to bare to you, we wish to banish them as we were banished, to a cold and lonely house, in the charge of a man who hated us. And we wish them trapped there as we were trapped.'”

The Goblin Emperor has an onerous glossary of characters, forms of address, and oddly spelled and pronounced names. This is intentional, as the reader will feel lost at times just as the young emperor does. This can grate at times, especially for those who wish to understand everything, but I quite enjoyed being swept up in the world along with Maia. This being said, there are also some steadfastly feel-good moments and characters to balance out the experience. Specifically, the relationship Maia has with his dutiful and traumatized secretary, Csevet, and his relationship with his two private guards Cala and Beshelar (called Nohecharei) are standout relationships that anchor the story of The Goblin Emperor.

‘ ‘Tis an ironic title, in sooth,’ Maia said feebly, realizing that the entangling garments of the nightmare were merely his bedsheets. His heart was hammering, and he was clammy with sweat.”

Though not grimdark in the traditional sense, The Goblin Emperor is a subversive novel that shows the ugly and bureaucratic underbelly of what it is like to be emperor in a world that does not want you. This, for me anyway, captures the spirit if not necessarily the aesthetic of grimdark. Overall, I highly recommend The Goblin Emperor to anyone looking for a different kind of fantasy novel.