Review: The Godless by Ben Peek 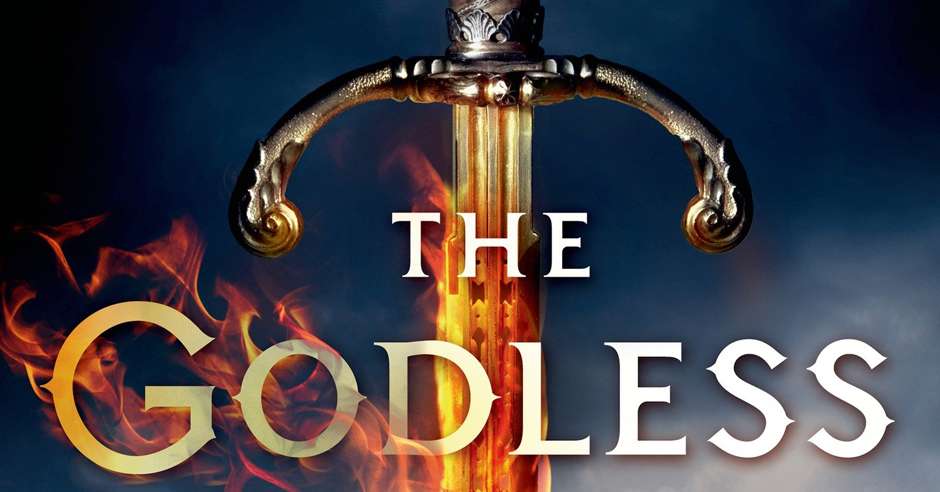 The grimdark fantasy market is spoiled for multi-book epics. Abercrombie, Martin, and Bakker all have well-established series battling it out on the shelves. Fighting for a space between them would be a daunting prospect for anyone. So how does Ben Peek’s entry into the fray, the Godless, stack up against its well-girded opposition?

Although Peek’s world sprawls across multiple continents, in this novel he confines the action to the small city of Mireea and the adjoining nation of Leera. Mireea is located behind the Spine of Ger, a mountain range that sits atop the dead god of the same name. Given the title of Peek’s novel, the Godless, it is perhaps no surprise that in this world the gods themselves are dead. Fragments of godhood, however, still manifest in mortals, marking them with strange powers and deformities. These people, feared and often reviled, are the “cursed”. 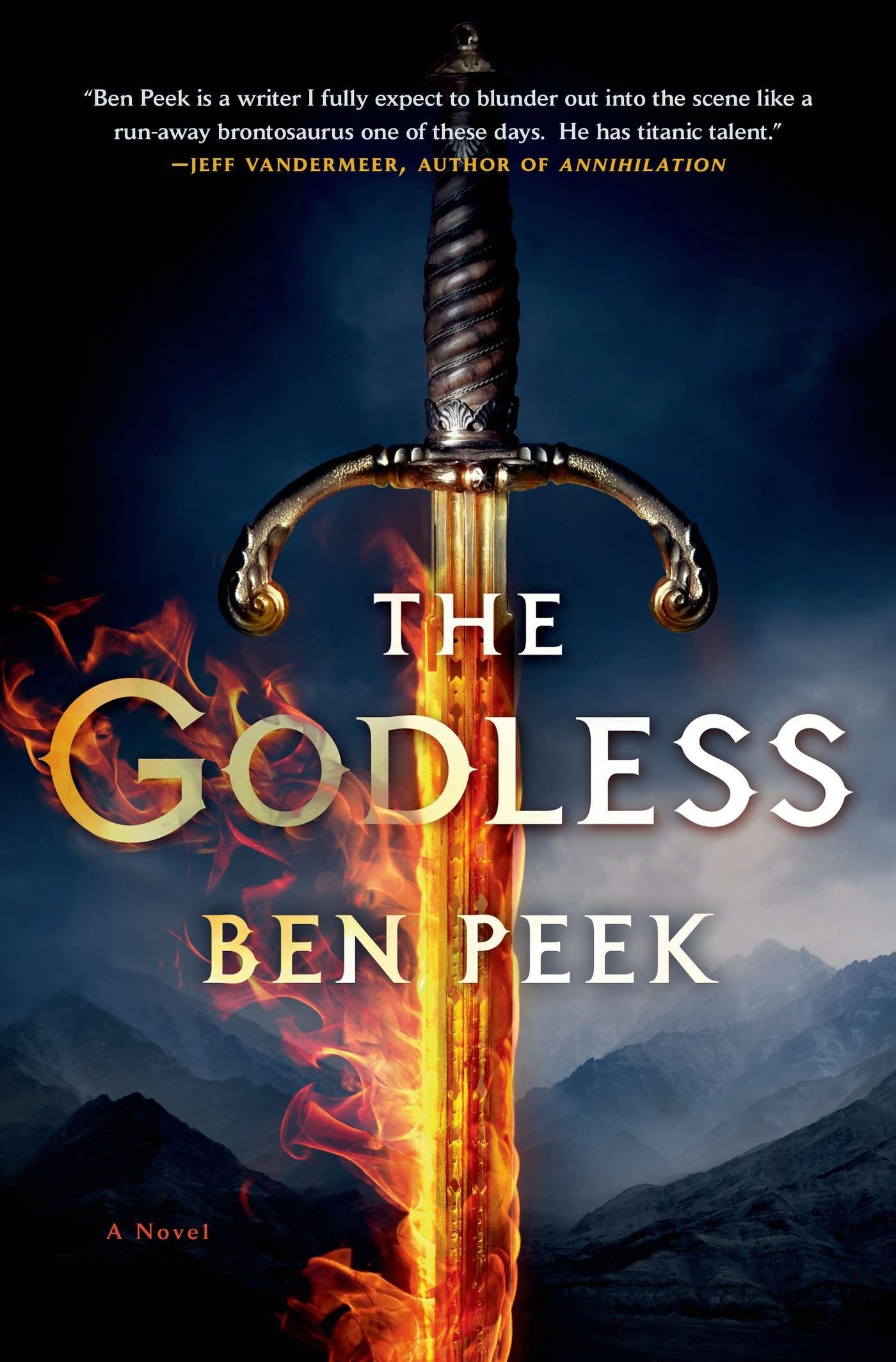 The novel focuses on three characters who find themselves in Mireea as it teeters on the brink of war with Leera: Ayae, a cursed apprentice cartographer; Bueralan, a mercenary; and the immortal Zaifyr, who can see and control the “haunts” of the dead. Near the novel’s outset, an assassin attacks Ayae in her master’s cartography shop. Her cursed abilities spontaneously protect her, and the resulting conflagration engulfs the shop and exposes her secret. In a time when she most needs someone to guide her, she instead finds herself ostracized by her peers.

Meanwhile, Bueralan and his saboteur group Dark, have been retained by Lady Wagan, ruler of Mireea, to enter Leera and find out more about the mysterious army that is being mustered against their city. Through Lady Wagan, Bueralan meets Zaifyr, who has been hired to track Ayae’s attacker, an undead creature thought to be have been summoned in Leera using blood magic. Although Zaifyr now lives a solitary life and wishes only to forget the horrors of the War of the Gods, he was once responsible for terrible atrocities that resulted in his fellow cursed imprisoning him. The same ability to manipulate the souls of the dead that resulted in Zaifyr’s imprisonment now uniquely qualifies him to track the undead assassin.

In addition to hiring Bueralan and Zaifyr, Lady Wagan has petitioned the Enclave for assistance against Leera. The Enclave is the ruling caste in the floating city of Yeflam, and one of Mireea’s strongest allies. The Enclave is also ruled by the cursed known as the ‘Keepers of the Divine’, who view themselves as descendants of the gods themselves.

In response to Lady Wagan’s petition, the Enclave has dispatched the Keepers Fo and Bau to Mireea. Fo is a man with the power to wield disease and plague, while Bau is his antithesis in cursed talent, a healer able to cure injuries with preternatural speed. But Fo and Bau have offered little assistance. Instead, they have sequestered themselves away in their tower lodgings, dabbling away at the arcane, as Keepers are wont to do. However, their infrequent forays into the city include a cryptic visit to Ayae as she recovers in hospital from her injuries. What is no secret is that they have a long-standing animosity towards Zaifyr. You can’t destroy a continent without some animosity resulting, and Aelyn Meah, the head of the Enclave, was one of those responsible for imprisoning Zaifyr for his crimes.

The visiting Keepers certainly are an odd couple: Bau the white robed healer with the requisite garb of sandals and pithy moral philosophy; and Fo the disease spreading psychopath, conducting his weird experiments like some hulking Dr Frankenstein. Fo pins mice to tables, feeds them alive to snakes, while Bau the healer talks civilly of the good they do in curing disease. Despite Ayae’s reservations she is drawn to them. The only other person she has to turn to for help with her powers is Zaifyr, but Bau warns her not to trust Zaifyr. It seems her tutelage in her cursed abilities can take one of two paths, and she is divided about what to do.

Through characters such as Ayae and the Keepers, Peek injects regular doses of magic into the narrative. This magic is usually the grimmer, earthier variety – dead ghosts, magic plagues, blood sacrifice, or control of the raw elements such as Ayae displays. After all, the gods are dead. Magic went and broke this world. Folks aren’t conjuring up fireworks and bedding their maidens down with unicorns.

In the Godless, much of the magic is confined to the powers of cursed characters. The powers of the cursed function almost as superpower abilities rather than magic in the traditional sense of casting spells. Ayae’s character is almost an origin story of sorts. She has her superpower thrust upon her in what amounts to divine will, is ostracized, and then comes to accept her powers and use them to try and save the city she loves.

I did get the sense that the later novels will push the magic angle much harder. Compared to neighbouring cities such as Yeflam, Mireea is very much a mundane, salt-of-the-earth city. Yeflam, by comparison, is directly overseen by the cursed and is referred to as the floating city. The political and magical divide between it and Mireea is fairly obvious.

Such political divides do serve to drive some political intrigue in the plot, but the machinations of the different factions do feel a little distant from the action and a little opaque. Perhaps this is because the major power brokers have yet to fully play their hands and are largely acting through proxies. The powerful cursed known as Jae’le literally instructs Zaifyr through a crow familiar. One downside of this “hidden factions” element is that there are points where the obviously villainous powers that oppose the protagonists don’t seem to possess the requisite punch. I would have preferred Leera’s army to have had a bit more personality and bite, a bit more of a visceral threat factor about it.

While the book occasionally suffers from a lack of strong antagonists, the final third of the book concludes the story in rousing fashion, with an energetic battle and an apocalyptic confrontation between several of the more high-powered characters. In this final third, the pieces of the plot fall into place, Ayae’s powers gain traction, hidden antagonists come to the fore, and the action ramps up.

When it comes to grimdark, the Godless toes the shallower waters but never swims out into the black depths. Although two of the main characters, Zaifyr and Bueralan, have checkered pasts, these play out more as backstory than as character traits at the point in time when we meet them. Admittedly, they’ve both committed questionable sins in the past, but when we meet them their moral compasses seem to point fairly straight.