The Gunslinger, originally written by Stephen King from 1978 to 1982 then revised and re-released in 2003, is the first book in the ambitious Dark Tower series, King’s self described ‘magnum opus’. Having read the novel’s initial version nearly two decades ago, my memories of it have blurred over time and thus this review is meant specifically for the modern release. 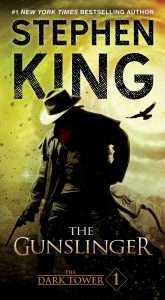 As explained in a lengthy foreword, due to the vast amount of time between having written the first book and completing the seventh, final, book of the sequence, King felt that not only were there too many continuity errors requiring retconning, but that also his own ability as a writer had changed so significantly, that to properly complete his series he would need to revisit his previous work.

As a devotee of the series who read on to completion, I found the revision to be an excellent piece of fan-service, weaving in references to later plot threads, adding to the world-building, creating better consistency of characterization, and of course, fixing some continuity issues. Nevertheless, it did occur to me that most of the changes did little to move the needle on the plot or structure of the actual book and that, most likely, an uninitiated reader might find the added references confusing or irrelevant which would surely detract (if only mildly) from the pacing.

I, however, loved every page of it.

The Gunslinger follows the implacable Roland Deschain on his mysterious quest to kill the sorcerous Man in Black. Inspired unabashedly by Milton’s Paradise Lost as well as the western films of Sergio Leone, and of course, The Lord of the Rings, King’s dark fantasy take on The Man With No Name leads us on an relentless quest through a post-apocalyptic hellscape as Roland pursues his quarry at any cost. As the gunslinger draws inexorably closer to his prey, he must navigate the devious traps left behind by the Man in Black, putting his determination, morality and even his sanity to dire test.

Mixing in pieces of Arthurian legend along with bits of modern day nostalgia, King manages to craft a decaying world that feels just familiar enough to be unsettling. In Roland, we find a tragically flawed protagonist seemingly reminiscent of Melville’s Ahab in his obsessive pursuit, though his motives are painted less clearly than the Captain’s more straightforward thirst for revenge. While on the surface, the plot may seem to meander somewhat in its execution, it is in fact carefully constructed to dictate exactly which pieces of Roland’s characterization King wishes to reveal at each stage of the novel, leaving the reader to revisit their assumptions as the story progresses.

Readers of the prolific author’s other works may be surprised at the prose here; while King did revise much of what he felt was ‘pretension’ and ‘hollow blather’ attributed to the immature writing philosophy he employed at the time of its original publication, the voice still reads shockingly differently in comparison to his modern works. This factor actually serves the novel quite well though, as the relatively grandiose (at least for King) verbiage lends a sense of gravity to the events of the novel that his later, more self-assured, writing voice might not have achieved; as King describes it in the foreword, “…for all its faults, it has its own special charms…”

All told, it was a joy to revisit The Gunslinger, which is, to me at least, one of the key progenitors of the modern grimdark genre. While fans of the series tend to overlook this first book in favour of the more stylistically-familiar later series entries, this one always stood out in my memory as one of the strongest due to its tight pacing, darker atmosphere and a couple of truly show-stopping scenes. If you haven’t read this now-classic piece of fantasy yet have found yourself on a grimdark website reading reviews of it, you may wish to strongly consider rectifying the issue by going out and grabbing yourself a copy, posthaste.

Read The Gunslinger by Stephen King