Despite being the first entry (of 4, as of this writing) in the prose novel series Marvel Untold, David Annandale’s The Harrowing of Doom is the last entry I’ve read. I discovered the series when I reviewed The Patriot List by David Guymer , which I quite enjoyed. While I couldn’t get into the third book, Witches Unleashed, I read, reviewed and enjoyed the fourth book, Reign of the Devourer. The Patriot List and Witches Unleashed were both stand alone novels. Reign of the Devourer, also by David Annandale, was a direct sequel to The Harrowing of Doom, and having enjoyed Reign I was excited to come full circle. It was the right choice because The Harrowing of Doom is the best book in a good series. 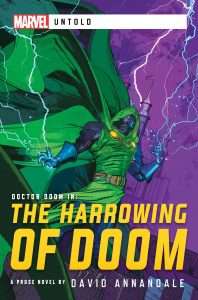 Doctor Victor Von Doom, known in his country Latveria simply as Doom, fights a duel against the forces of Hell every year to try to free the soul of his mother. Every year Doom fails. That is, until he has the idea to join forces with the most powerful witch in his land, Maria Von Helm. Together they will construct a machine built from super science and sorcery: the Harrower.  Meanwhile, Rudolfo Fortunov, former crown prince and now leader of the royalist underground, plots to overthrow Doom and seize control of Latveria. Threads of dark magic, betrayal, rebellion and tragedy come together to tell a truly riveting tale.

The Harrowing of Doom is a quick read and a real page turner. It’s not often a book keeps me up late so I can read just one more chapter, but The Harrowing of Doom got its hooks in me. Annandale’s prose is straight forward and doesn’t get bogged down in unnecessary detail or exposition. While a key element of Doom’s character is his indomitable will, I will say that Annandale harped on the point once too often, but that’s a minor complaint. I also found Zargo’s character a bit one note, his transition from student of mysticism to priesthood a bit of a hole. Otherwise, Annandale does a fine job breathing life into his characters in a short amount of space. My chief complaint about the Marvel Untold novels is that since they’re tie in novels, I don’t worry as much about the main characters. The Harrowing of Doom managed to suspend my disbelief a few times, and I found myself concerned for the safety of certain characters in spite of myself.

The novel is well paced, dialogue is well written, and the action scenes are exciting. But for me, The Harrowing of Doom’s best qualities are its horror elements. There were several passages in particular where his depiction of Hell was terrifying in a very classical way, reminding me of Edgar Allan Poe and early Black Sabbath albums. Not gruesome or gory, but still evoking otherworldliness and dread as our reality faded away and was replaced by a literal Hellscape. These scenes were highlights of the book and are what elevates The Harrowing of Doom above the rest of the Marvel Untold series. The Harrowing of Doom is a good read and highly recommended for fans of the darker side of comics or anyone who’s looking for a sampler of action and super science with delightful splashes of gothic horror.

Read The Harrowing of Doom by David Annandale

Jason is an avid videogamer, sci-fi/fantasy lover, and small press and indie comics aficionado. He can recite Big Trouble in Little China from memory, is obsessed with Borderlands, and loves art and travel. When he's not having adventures with his amazing wife, he's home walking his dogs.