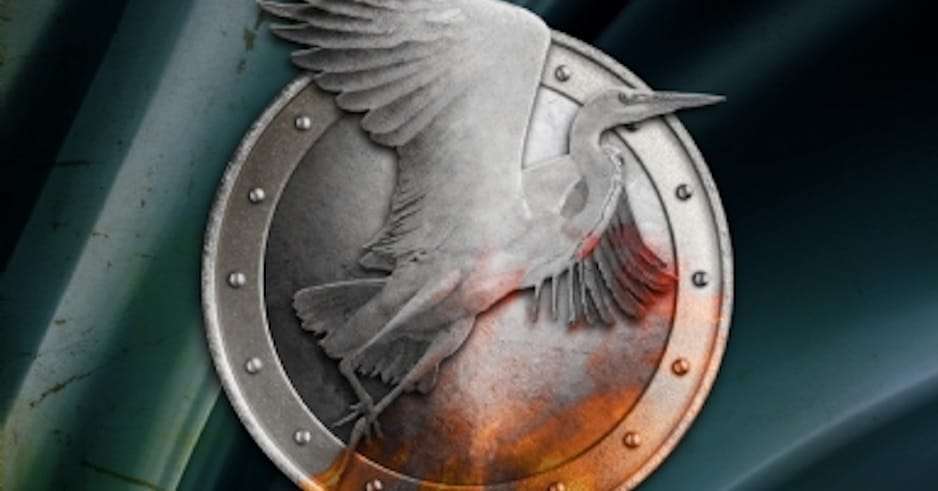 I was sent an ARC of The Heron Kings from Flame Tree Press for an honest review. Thank you for the opportunity to review this book.

The Heron Kings is a character-driven story about the horrors of war. Dark, brutal and bloody, Lewis is not afraid to pack a punch (or kick, or stab, or anything else violent).

‘Give my regards to the king.’

Two nations at war and a whole lot of innocent people caught in the middle, this is a tale of the middle side, those not interested in the war, only surviving. I use the word innocent lightly, as Lewis highlights himself through the effect of war, is anyone really innocent? The Heron Kings follows several point of views.

Firstly, Alessia is a physic who leaves the safety of her temple to help to the best of her abilities those caught up in the brutality of war. She is a strong lead who wants to do good but refreshingly wasn’t a saint. Ulnoth is a farmer whose family and village is slaughtered during the war and he decides to take the revenge path. These two carry the bulk of story-time and work well together as two different people going the same direction, just in very opposite ways. Another character, Vivian – ‘Burned Bitch’ / spy for one of the warring nations – played a large role in the story and I enjoyed her chapters the most. She was written well, full of intelligent dialogue and intriguing plot points.

‘All that’s mine is yours to command. Let gods and men witness, from now until death I serve Your Majesty in all things…’

There is a group of secondary characters than to me seemed to blend, each sounding just that bit too similar. They supported the main few and added interest but lacked a certain something to carry themselves to levels that would have made me care about them. Ulnoth’s and Alessia’s relationship, though tropey, was written well and Lewis included wit, banter and depth to both that was one of his strong points.

Lewis’ prose was clear and concise. I wasn’t confused at any point and knew exactly what was going on and what the characters through. Lewis writes in a very dialogue-heavy way, with little to no description of characters appearances and the setting. We find out the world-building and history of the land through conversations and the occasional inside thought. I liked this style as it only added to the strong characters and allowed me to paint for myself the picture of this medieval-fantasy world.

‘May the gods light both our paths… and darken our enemy’s.’

As the story grows there is lots of to-and-fros with the various forces which reminded me of The Patriot (great film, by the way). I really liked how The Heron King’s was focused on the middle side rather than one of the nations. Plotwise, I felt that at times it was a little thin and I did question a lot of tactics/character choices. There were points in the story where events felt forced and unrealistic, or just a little too easy. However, reflecting back on the novel there were enough events and conflicts that kept the story progressing towards the end and had a good ratio of dialogue-action sequences.

Considering the tone of the book, at times it was adult, at times very adult which to me felt sometimes too extreme. Whether it be bursts of swearing, or crude scenes or implied rape, or intense violence that made me squirm, it took me out of the story. (Warning! There are a few scenes that could push people to put it down). I understand why the author used some of this, just to me it felt like it didn’t fit with the overall tone of the book.

‘One spear wound and one dead ex-comrade. Better be worth it.’

3.5/5 – A promising debut from Eric Lewis. The Heron Kings is full of consistent characters that are inspiring and tough. Gruesome at times, this shows the true savagery of war and has enough action and intrigue to keep you on your toes.