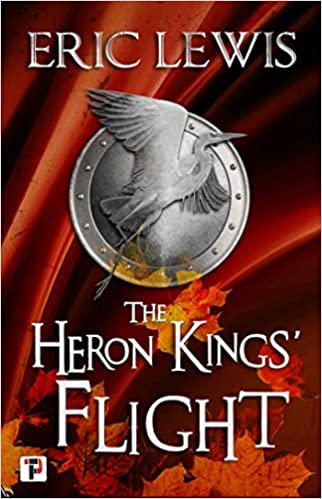 The Heron Kings’ Flight is set in the same medieval low fantasy world as its predecessor but the events of this novel take place a century on from its conclusion. So although reading The Heron Kings may help you to understand the history or geography of this world, it is not essential pre reading. The Heron Kings’ Flight can stand on its own and be enjoyed as the introduction to Lewis’ world if you have not already discovered this series.

Due to the time jump, all of the characters of The Heron Kings’ Flight are new, though there are some nice nods to some of the key characters from the first novel. Our main characters in this instalment are Linnet and Aerrus who are young members of the Heron Kings. The titular band of guerrilla fighters from the first novel has grown into a more organised guild of forest rangers. They have an uneasy truce with the crown and work in the shadows to protect those in need. The Heron Kings have become a forgotten legend in the century of peace and even those they have been helping do not really believe in them after all this time. The betrayal of the Heron Kings and the impending invasion of their surrounding lands threatens this existence and Linnet and Aeruss, along with former soldier Eyvind, have to discover the traitor and try to form a new resistance against the invading god emperor Phynagoras.

I enjoyed Lewis’ writing style in The Heron Kings’ Flight. Much like its preceding novel Lewis has written a clear and concise story, I was never confused as to where we were in the world or what was going on. It still has the dark humour and witty character conversations that I liked and, as with before, the exchanges between characters are where the reader gets the majority of their world building information.

There is also a distinctive difference in Lewis’ descriptions of the violent events in the novel. The Heron Kings’ Flight is still set in an exceptionally brutal and violent world, but this violence is no longer hyperbolic in its extreme. However the explicit and gruesome depictions of violence (including rape) will be too much for some readers and I think are deliberately described to show the harrowing atrocities that humans are capable of committing against one another. There is no fantastical ‘bad guy’ who can be blamed for the events in Lewis’ world; the savagery is entirely down to the choices made by the characters. I did find some of this very hard to stomach and personally would prefer the escapism of more fantasy elements.

However The Heron Kings’ Flight is not relentlessly dark and there are some very humorous or touching lighter moments. The characters and their arcs are engaging and, certainly for the main trio, relatable and mostly likable. There are layers of political intrigue and subterfuge as well as fast paced action. The Heron Kings’ Flight is not for the faint hearted but I think would appeal to fans of medieval style fantasy worlds with a high threshold for gritty and realistic gore. 3.5/5.