The Hollow Places by T. Kingfisher caught me from the opening. Uncle Earl owns a museum, one of those strange museums of oddities that appear in random rural locations. Personally, I’ve always enjoyed those sorts of museums despite not believing in them. It’s a very particular brand of excitement trying to unravel cryptozoological mysteries. 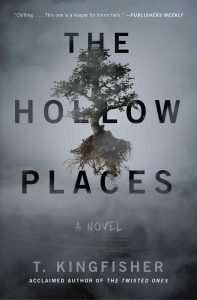 Uncle Earl’s museum is called the Glory of God Museum of Natural Wonders, Curiosities and Taxidermy in Hog Chapel, North Carolina. Right from the opening he’s a character who oozes personality:

Uncle Earl believes strongly in Jesus, Moses, the healing powers of crystals, the Freemasons, the Illuminati, the aliens who landed at Roswell but the government is suppressing it, secret histories, faith-healing, snake handling, that there is an invention that will replace gasoline but the oil companies are suppressing it, chemtrails, demon-possession, the amazing healing properties of Vicks VapoRub,  and that there’s proof that aliens contacted the Mayans and the Aztecs and probably the Egyptians but the scientists are suppressing it. He believes in Skunk Ape, Chupacabras, and he positively adores Mothman. He is not Catholic, but he believes in the miracle of Fatima, visions of Mary appearing on toast, and he is nearly positive that the end times are upon us, but seems to be okay with this, provided it does not interfere with museum hours.

Kara, his niece, takes her uncle up on an offer of a place to stay after her overly amicable divorce. She gets to live in the Wonder Museum, a place she has worked in while growing up, and that she seems to view as home more than any other place. When he gets called up for surgery she is to take over running the museum until he’s rested and ready to return.

This would be great, except that after he leaves, a hole to another dimension appears behind one of the walls. It doesn’t seem like that at first. It looks like an extra room, but the hallways on each end keep turning and twisting. At first Kara and Simon, the barista from next door, assume it’s bootlegger tunnels, but as it keeps going and twisting, they stumble into an alternate, hellish reality: one of the eponymous Hollow Places.

This is entirely a case of personal preference, but when I like horror, it’s usually slow-paced as hints of dread creep through. The Hollow Places is the opposite of a slow-burn; Kara and Simon dive headlong into this parallel dimension. There are some horrific scenes in this section, most of which relate to the willows or the extremely eerie school bus they find, but it felt a bit like jumping straight from the inciting incident to the climax.

The sections that take place after they return to the normal world and try to prevent further incursions felt stronger to me. The horrors were more attached to reality, which I’ve always felt more unsettling, and what place works better for such horrors than one of these museums of oddities?

The writing throughout was strong, and there was a lot of solid comedic banter between Kara and Simon. This could undercut the horror tone, but using humor as a reaction against horror is normal and human.

If I have an issue with this novel, it’s this: Uncle Earl should clearly be the narrator.

Get rid of the surgery plotline and you’ve got an old but boisterous man trying to protect the museum of oddities he’s built. He’d also be fascinated by the strange alternate world that proves so many of the theories he loves are correct. Kara and Simon exploring the strange reality rather than retreating felt like a head-scratcher; it wouldn’t have for Uncle Earl.

The Hollow Places was inspired by Algernon Blackwood’s The Willows, the story that Lovecraft declared the finest supernatural tale of all time. The influence and inspiration is obvious, even if The Willows has significantly more tension between its people trapped by the eldritch willows. The Hollow Places can stand proud in that lineage even as it has very different tone.