REVIEW: The House of Night and Chain by David Annandale 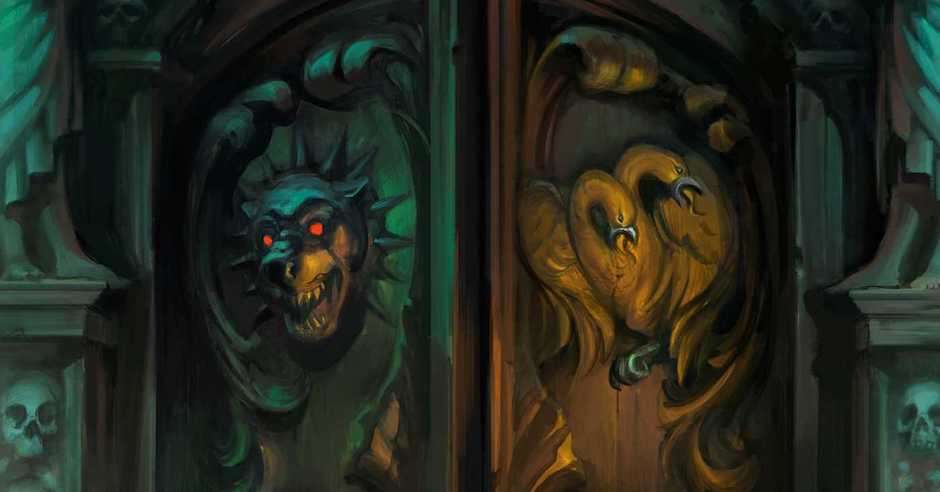 Horrific influences and elements permeate every facet of the Warhammer Universe–from the old World of Warhammer Fantasy, to the Realms of Age of Sigmar, and on to the grimdark future of Warhammer 40,000. From the terrifying machinations of Chaos gods, to the ravenous chitterings of Warp creatures ready to feast on febrile minds, terror is everywhere. So, it was only natural that The Black Library launch its own Horror line (an umbrella under which stories which transpire in the multitudinous Warhammer settings can be told). One of the first full-length novels released under this imprint is The House of Night and Chain, by David Annandale; which I’ll be reviewing today. 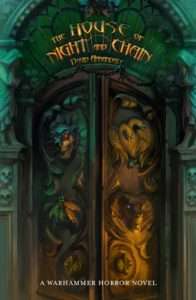 The House of Night and Chain takes the standard ‘haunted, sentient house’ template, and customizes it for the 40K universe. It follows an Astra Militarum colonel named Maeson Strock, who is ‘put out to pasture’ following a horrifyingly pyrrhic victory against the endless swarms of the Tyranids on a planet called Clostrum. Being a descendent of the ruling family on his home planet of Solus, Strock is charged with assuming the Lord-Governorship. Through this position, Strock is to quell the rampant corruption festering on Solus, perpetuated by the other ruling families.

The heart of the Strock fortune is a mineral-rich hill; whose deposits granted the family their ascendency. At the center of this property is the imposing estate of Malveil. Within Malveil’s foreboding walls, Maeson’s predecessor lost his mind. And, it was from Malveil’s heights that Maeson’s wife, Eliana, leapt to her death.

See, as in all good haunted house stories, Malveil has a malevolent sentience all its own. It calls the Strock’s home, to fulfill their obligations as stewards of Solus; and then, it slowly asserts its dominance over them.

Well, let’s take a quick look at the blurb, and then examine the elements of the book itself:

In a bleak corner of the city of Valgaast, the House of Malveil awaits. A place of darkness, its halls throb with a sinister history. Its rooms are filled with malice. Its walls echo with pain. Now it stirs eagerly with the approach of an old heir – Colonel Maeson Strock of the Astra Militarum has returned home to his ancestral mansion. He is a man broken, both by the horrors of war and by personal loss, and he has come home to take up the mantle of Planetary Governor. He hopes he can purge his home world of political corruption, and reforge connections with his estranged children. He hopes he can rebuild his life.

Malveil will feast on these dreams. Strock believes he has seen the worst of the galaxy’s horrors. Malveil will show him how wrong he is.

The House of Night and Chain is told in the first-person POV of our protagonist, Maeson Strock. Annandale’s core focus with the books is on Maeson, and his slow, deliberate decline into madness. Considering this, he’s done a commendable job fleshing out this character. Maeson is haunted by his past ‘failures’ (the pyrrhic win at Clostrum, the loss of his wife, his estrangement from his children), and yet he approaches his new duties on Solus with the consummate professionalism of a lifelong military man.

Annandale does a masterful job charting Strock’s decline. We go from watching his successful attempts to combat and stamp out the embedded corruption, dodging assassination attempts, and trying to reconcile with his children, to bearing witness to his grasp on sanity become more and more tenuous as Malveil asserts its devious nature. Whispers, and laughter of children long gone are heard around every corner. Glimpses of things which should not appear. Endless passages, and a constant sense of foreboding.

A major catalyst in Strock’s mental decline is his wife, Eliana; who is fleshed out primarily in epistolary format via a discovered journal. Through its entries, which depict a woman becoming increasingly unhinged by Malveil’s machinations, we can chart a distinct parallel with Strock’s experience. Malveil calls, claims, then owns.

Eliana’s story is another tragedy; a formidable woman, she did what she felt was right, serving as her husband’s political proxy in his absence, paying the ultimate price.

Secondary characters include Strock’s now adult children, two close friends/confidants, and a primary rival among the ruling families. All of these characters are compelling; just I wish we could have seen more of them. This is understandably difficult; as the story is told from Strock’s point of view, and said viewpoint becomes increasingly myopic as Malveil’s tendrils tighten.

Finally, the primary antagonist of the story is Malveil itself. In Malveil, Annandale has created a delightfully diabolical entity. While the causal factors of Malveil’s evil are easy to predict, the execution is spot-on, keeping the reader invested.

When one thinks of haunted house yarns, the term ‘action-packed’ rarely comes to mind. With that in mind; I must say that Annandale does an exemplary job of integrating blistering 40K elements with traditional haunted house proceedings. The Clostrum flashbacks are insanely frantic, urgent, and terrifying. Annandale, a longtime kaiju fan, is excellent at depicting the truly monstrous aspects of the Tyranids.

There are also a few setpieces; attempts on Strock’s life, which are presented quite well. Particularly of note is one involving a bridge collapse; the magnitude of which is conveyed so convincingly that I felt it was transpiring before my eyes.

Also, when House of Night and Chain reaches its climax, there are a few brutal action scenes as well; bloody, brutal, and horrifyingly satisfying.

In the past, Annandale has been a bit hit or miss for me. I’ve always said; there’s three topics he excels at: Faith (or crises thereof), Horror, and Kaiju/Monsters (for an excellent story which combines all three masterfully, I’ll always recommend his story The Conversion, from the Kaiju Rising anthology).

That being said, because of his passion for horror, Annandale is one of the few Black Library authors that I was truly looking forward to a Warhammer Horror entry from. And, I’m happy to say, he does not disappoint at all. The mechanics for a solid haunted house yarn are here. Annandale knows how to plant, and cultivate fear, unease, and terror. There is no sense of safety. Hell, there is no sense of sanity. We, the audience, are kept in the dark just as much as Maeson Strock is, and this guarantees a bizarre, discomfiting ride in the latter portions of the book.

Annandale knows when to keep the terror subtle, and when to showcase the blood-soaked, the gruesome. This is an extremely tough balance to strike, so kudos to Annandale on doing it proficiently.

There are, however, a few quibbles that I have with The House of Night and Chain. The first has to do with some of the character descriptions. Many of the characters are initially described in ways to portray them as either horrifying or bizarre; i.e. a personal driver/guard whose lower body is a continuous track system, the full back brace which restricts his daughter to a severe rigidity, his son’s slovenly figure, molded by a life of decadence. Of particular note is Montfor, Strock’s archenemy on the Council, who has a face which is literally rotting away.

My point is that these physical aspects should have been played upon in every encounter Strock has with these characters. So much in horror is predicated upon what generates unease; especially in everyday situations. Physical appearances (especially the hideously warped), reinforce this motif. They were introduced for a reason; ergo, they should have been utilized more.

Another (very minor) issue is with a sense of scale. To be fair, this affects a lot of sci-fi works, so it’s not limited to this book. Everything in this book has a very ‘local’ feel, although the events are supposed to have global ramifications. And yet, all of the critical decisions of a mineral-rich world transpire within a close, ramshackle area. It doesn’t feel right. In the end, it feels as though Strock is less a planetary governor, and more the governor of Valgaast (the region where the story takes place) alone.

Again, a minor complaint, but still.

Simply put, Annandale hit it out of the park with The House of Night and Chain. This is a story which is, in turns, exhilarating, terrifying, and heart-wrenching. Annandale marries campfire horror with grimdark military sci-fi to yield a blood-curdling tale of consummate terror.

Buy the House of Night and Chain by David Annandale

Anthony Giordano was born and raised in NYC, and has been lost, adrift in the Warp (aka Upstate New York) for close to a decade. He reads, he reviews, he writes.