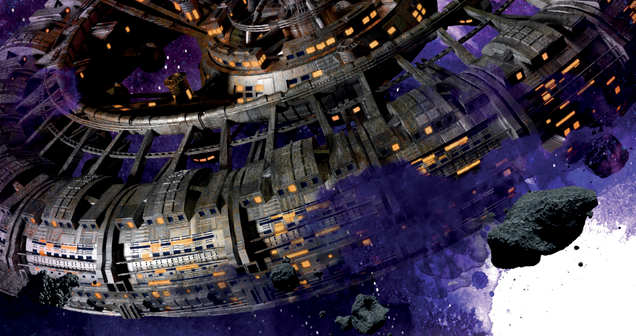 The Immortality Thief is a beast of a book that managed to grip me in a matter of a few pages. In just so few words, Taran Hunt was able to lock me in for the rest of the story, her quick-witted characters and snarky dialogue piquing my interest on page one. The magic of this book lies within it’s mysteries, the story laced with a lingering sense of the unknown, and giving away too much would ruin the experience I want so desperately for other readers to have. I recommend going into this book blind, just as I did, not at all prepared for the unforgettable journey ahead. 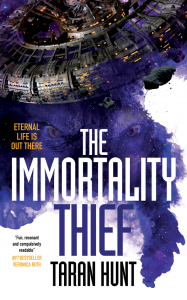 Without sharing too many secrets, The Immortality Thief was a cleverly executed space heist/mystery that I’ll soon be recommending to everyone that is willing to listen. The Immortality Thief follows Sean Wren, a passionate, snarky linguist and smuggler as he is given the task of salvaging important, secret data from an ancient ship orbiting a dying star. He and a few others are sent to this haunting, seemingly-abandoned wreckage and ordered to bring back data on the Philosopher’s Stone project. Yet he will soon learn that he and his small crew of criminals aren’t alone on this massive, derelict ship. Rife with the stuff of nightmares, this ship is extremely dangerous, and Sean and his crewmates are on a deadline as dangerous as they come. Not all is as it seems aboard this abandoned, haunting, nameless ship. This book wastes no time in tossing the reader in headfirst, and that’s partly why it works so well. You start off knowing absolutely nothing, which leaves you wanting—needing—to know absolutely everything. The strong worldbuilding and gritty character details are revealed alongside the immediate action and mystery, leaving behind a very tightly-written story.

Sean Wren comes off the page almost immediately. The reader is able to understand and even predict our main characters decisions before we’ve even fully grasped the rules of his world. Taran Hunt clearly understands how to write strong, clear, three-dimensional characters and put her skills to work in The Immortality Thief. The first-person tone creates the strongest bond between Sean and the reader, but that doesn’t mean that any other of Hunt’s cast of characters are any less fascinating or well-developed. Mentioning any others by name would be, in my opinion, partially spoiling the intricate, captivating mystery The Immortality Thief lays out for the reader, but I promise that they’re as funny and badass as our favorite sarcastic linguist. Despite the well-developed and painfully human characters that drew me in instantly, the world building of The Immortality Thief stuck out to me the most.

Set in a world with only one free-standing government left, the rules and power structures in Sean’s situation are painfully clear to the reader. The scene is set tightly and quickly, leaving you to be sucked into the alluring mystery that clouds the ship Sean’s crew inhabits. Taran Hunt clearly displayed a strong set of world building skills in her debut novel. This well-built, dangerous galaxy provides the perfect playing ground to house some of the terrifying monsters Sean’s world holds. Without giving away too much about The Immortality Thief’s host of scary space monsters, each gruesome creature was more thrilling and frightening than the last. I’ll spare a slight detail—maybe those with a fear of bugs should skip over a few pages. The Immortality Thief took me by surprise, and left me wanting so much more from this debut author. Wonderfully written, simultaneously terrifying and hilarious, this book was enjoyable up until the very last page. 5 stars.

Hannah has been an avid consumer of all things dark, gritty, and fantastical since reading A Game of Thrones at way too young of an age. She spends most of her time reading, writing, or playing video games, and is a passionate lover of troubled, morally grey heroines. She lives in the Pacific Northwest with her family and two dogs, and is always looking for something new to read.