The Iron Crown by L.L. MacRae is Book 1 in the Dragon Spirits series and a finalist in Mark Lawrence’s 7th Self-Published Fantasy Blog-Off (SPFBO7). In this epic, character-driven novel, MacRae excels at gradually revealing layers of gray morality hidden beneath the surface of what initially seems like a traditional high fantasy. 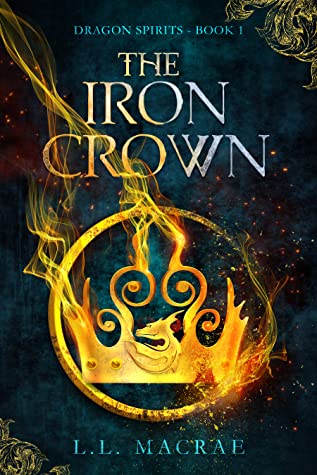 The Iron Crown is told from the perspective of four principal characters. The novel opens with Fenn, who awakens from an almost too-real nightmare to find his memories gone and his body washed up on the remote Isle of Salt. Fenn is found by Calidra and her partner, Jisyel, who nurture him back to health despite Calidra’s apprehension. We learn that Fenn’s amnesia is the result of being touched by the Myr, an ancient magical enemy who have returned to wreak destruction on the Realm of Tassar.

Can the seemingly innocent Fenn be trusted if he has been cursed by the shadowy Myr and requires their help to restore his memories?

Calidra is a natural pessimist who sees the worst in others. She has been estranged from her noble family for several years but has finally decided to return home for her father’s funeral. Calidra’s hostility toward others is a diluted version of the vitriol exhibited by her mother. But Calidra’s temper is softened by her loving, supportive relationship with Jisyel. The relationship between these two young women is one of the highlights of the book.

The remaining point-of-view characters are Torsten, the master inquisitor who will go to any length to suppress talk of the Myr, and Apollo, a thief who has been pardoned for his past crimes but might not have actually performed his required penance. The Iron Crown also features an outstanding cast of supporting characters, including Selys, a priestess with possibly competing loyalties, and Varlot, a former soldier and current drunken gambler, who has committed unspeakable acts of violence in his past life. Throughout the novel, L.L. MacRae carefully weaves the threads of gray morality with each of these characters, which darken as the story progresses.

The Myr are a well-crafted enemy, shrouded in enough mystery to maintain a satisfying level of intrigue throughout the book. They had supposedly been defeated five years prior to the events of The Iron Crown, but their shadowy forms have returned. Fenn discovers that he is one of many Myr-touched souls, whose amnesia is followed by severe physical pain and an untimely death.

The Iron Crown is a showcase for L.L. MacRae’s outstanding worldbuilding. I especially love it when fantasy authors allow their characters to explore the full world, seeing the different terrains and traveling across various countries. An early scene where Calidra flies atop a griffin over her homeland of Bragalia nearly took my breath away with its beautiful imagery.

The griffins in The Iron Crown are not mere beasts: they are hyperintelligent talking creatures who induce awe in people who witness them. The Iron Crown also features dragons aplenty, or dragon spirits, to be more precise. The dragon spirits form organically in the presence of forests, bodies of water, etc., with the goal of protecting their natural realms. Their powers are channeled through the humans who bond with them, creating a symbiotic relationship. The most powerful of the dragon spirits is Toriaken, the spirit of iron, who is bonded to Queen Surayo and is the power behind the Iron Crown. Toriaken appears in breathtaking fashion as a veritable mountain of iron.

MacRae’s writing is fantastic throughout the 563 pages of The Iron Crown. Her pacing is generally good, although the plot is a bit slow in the first part of the book. MacRae introduces new characters and elements of worldbuilding in a natural and accessible fashion. Despite the vastness of the world that she has created, I never felt overwhelmed by the rate at which information was being provided. Instead, I thoroughly enjoyed the time I spent in the Realm of Tassar and the bonds that I developed with this compelling cast of characters. I look forward to following up with Book 2 of the series, The Shadow Gate.