In The Last Kingdom, we follow Uhtred. son of Uhtred who is the Ealdorman of Bebbanburg by birthright. In the first-person perspective, Uhtred tells us his tale and throughout The Last Kingdom, he presents his formative years from a youth, through his teenage years to the time that he becomes a man.

During the prologue, Danes attack the outskirts of Beddanburg. Uhtred’s brother is murdered by a Dane called Ragnar the Fearless. The Saxons retaliate in a pitched battle, during which 9-year-old Uhtred sees his brother’s killer and tries to get revenge.

“I recognised him as the man who had killed my brother and, like the fool I was, I screamed at him.” 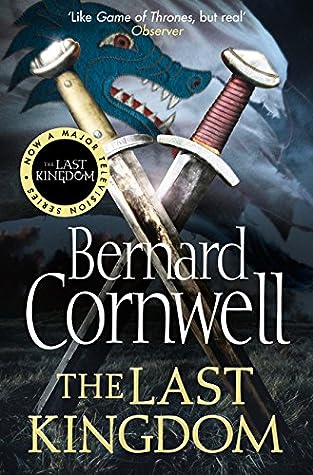 Seeing the courage and fearlessness that Uhtred already holds at such a young age, Ragnar doesn’t kill him but takes Uhtred with him at the end of the battle. Throughout the next years, Ragnar becomes fond of Uhtred and sees him as an adopted son. Uhtred, likewise, loves Ragnar like a father.

During this period, Uhtred lives like a Dane. He lives alongside Ragnar’s family including his sons, his adopted daughter Brida, his real daughter Thyra, and Rangar’s blind and wise father Ravn. Throughout this time Uhtred learns the warrior ways, learns how to speak Danish, and finds out about the ways of Woden, Thor, and the “pagan gods.” He takes part in numerous battles and skirmishes against the Saxons and meets the army’s heavy hitters such as Ubba, Ivar, and Guthrum.

There are so many excellent and memorable characters. Cornwell’s penmanship expertly brings them to life. I finished The Last Kingdom yesterday and last night I had a dream about Uhtred and Young Ragnar. It is not often that an author’s characters invade my subconscious in such a way. Uhtred is a great character. Not quite Danish and not quite a Saxon. Confused regarding his religious beliefs as he just wants to fight and to get Beddanburg back from his treacherous uncle. Characters like Ubba, Leofric, Ragnar, and Young Ragnar jump of the page and their dialogue exchanges with Uhtred are well composed and extremely memorable.

“Destiny is all, Ravn liked to tell me, destiny is everything. He would even say it in English, “Wyrd biõ ful ãræd.”

When I started reading The Last Kingdom I hadn’t watched the BBC series yet. I initially decided that I would read ahead so that the show didn’t spoil events for me. I purchased the novel and also the audiobook which features the excellent Jonathan Keeble as Uhtred. This plan didn’t quite work out. After I had read the first few chapters I decided to watch the first episode. The finale of this episode reveals a huge moment of death and deceit that doesn’t take place in the novel until around 60%. I’ve only got myself to blame for spoiling it but thought I would highlight this in my review so that potential readers don’t make the same mistake. This moment was still extremely powerful and important to the novel’s narrative but I think I’d stolen away from the unpredictable nature of the incident. The book focused a lot more on young Uhtred than the show. The scenes of Uhtred’s youth are extremely important to who he becomes and I think the show missed out on some amazing moments that are featured here.

“The preachers tell us that pride is a great sin, but the preachers are wrong. Pride makes a man, it drives him, it is the shield wall around his reputation… Men die, they said, but reputation does not die.”

The Last Kingdom was an extremely enjoyable historical fiction read that features excellent drama, well-realised characters, and is chock-full of memorable battles and duels. The pacing is great too and at the more heated moments, I almost felt like I was part of the battle bellowing “shield wall!” with the sweat, blood, gore and death dripping from the pages. I am so glad that I started Uhtred’s story. With there being 13 books in The Last Kingdom/ The Warrior Chronicles/ The Saxon Stories series I am aiming to read one a month for the foreseeable future. I’d like to thank Edward Gwynne for recommending this series to me.