REVIEW: The Lords of Silence by Chris Wraight 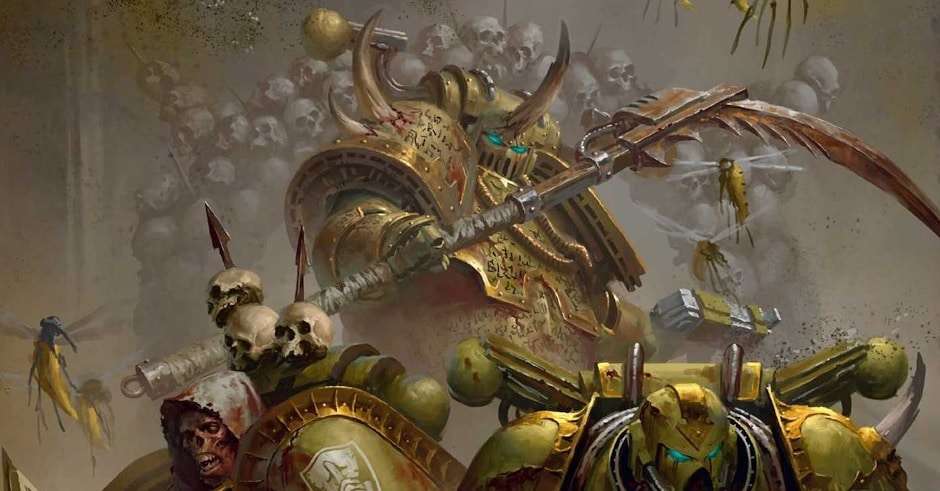 Roughly a year and a half ago, Games Workshop released their Dark Imperium box set. This coincided with an in-universe timeline advancement, which brought the proceedings to what can be termed “Warhammer 41K”. Whenever a new edition/box set is released, there is a push for visibility among the factions included; new models, fiction, etc. Dark Imperium featured the ubiquitous Ultramarines and the grotesque Death Guard. As a result of this, we have seen some spectacular new models for that odious group of Nurgle-worshippers, as well as books like The Lords of Silence by Chris Wraight, which we’ll be looking at today. 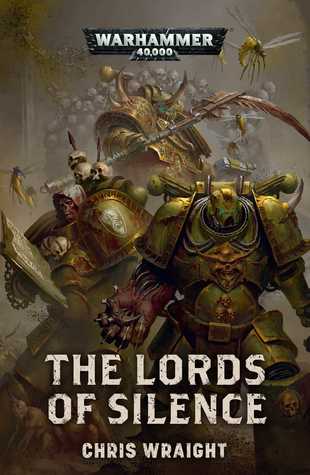 Black Library has had a commendable track record in offering compelling books focusing on the Chaos Legions; imbuing them with purpose and validity, rather than making them moustache-twirling, bolter-swinging caricatures (see Storm of Iron, the Word Bearers omnibus, and the Night Lords omnibus). The Lords of Silence is no exception – in fact, in my opinion, it goes above and beyond. Wraight has made the Legion his, in no uncertain terms. This book is less of a narrative focused on the completion of a goal than it is a treatise on the minds and tactics of the Death Guard. It is engaging, action-packed, written with exquisite detail, and tempered with just the right amount of levity to give true life to these undying warriors.

Before we delve into the story, let’s look at the back of the book:

The Cadian Gate is broken, and the Imperium is riven in two. The might of the Traitor Legions, kept shackled for millennia behind walls of iron and sorcery, has been unleashed on a darkening galaxy. Among those seeking vengeance on the Corpse Emperor’s faltering realm are the Death Guard, once proud crusaders of the Legiones Astartes, now debased creatures of terror and contagion. Mighty warbands carve bloody paths through the void, answering their lord primarch’s call to war. And yet for all their dread might in arms, there is no escape from the vicious legacies of the past, ones that will pursue them from the ruined daemon-worlds of the Eye of Terror and out into the smouldering wastes of the Imperium Nihilus.

And now, for the benefit of those who are still new to the Warhammer Universe, here are some Notes for Neophytes:

Remember, the First Founding of the Space Marines saw the creation of 20 chapters, each with their own Primarch. The Chaos Gods scattered the Primarchs across the universe, and the Chapters developed back home on Terra in their absence. The Death Guard was the XIV Legion of the Space Marines, originally known as the Dusk Raiders. When the primarch Mortarion was found on the toxic world of Barbarus, he brought some of the natives into the fold. The Dusk Raiders became the Death Guard, and was comprised of Terrans and Barbarans.

During the Horus Heresy, the Death Guard pledged themselves to Nurgle, the Chaos God of, well, rot is the best way to put it. Now, Death Guard forces are made up of original legionnaires, those who’ve ascended, and those brought from outside chapters/warbands into the fold.

In the new Dark Imperium, along with the Primarch Roboute Guilliman returning to lead the Imperium, the Death Guard Primarch Mortarion has returned to rally his forces.

A quick note before returning to Lords of Silence: a huge element of the events of the Dark Imperium-based stories centers around Abaddon’s 13th Black Crusade, which destroyed the planet Cadia, and tossed the galaxy at large into a state of upheaval. This action, as well as Abaddon’s aggressive push to permanently wipe the Imperium off of the face of the universe, have a trickle-down effect on The Lords of Silence.

The Lords of Silence is told in a non-linear narrative, offering us disjointed fragments of a few interconnected storylines. The book focuses on the titular Lords of Silence, a storied and legendary Death Guard warband, and their travels aboard their near-sentient ship, the Solace.

Wraight focuses his narrative on a superb cast of characters; a gaggle of higher-ups in the Lords hierarchy, all with different skill sets and philosophies. These attributes are filtered through scenarios which test their mettle, resolve, and direction. At each turn, they must prioritize which ‘need’ or ‘desire’ to satisfy: to fulfill the millennia-old mandates of their Primarch and assail Ultramar (home of the despised Ultramarines), answer Abaddon’s call to join the Crusade and end the Imperium, or just find the next target to whet their blades with fresh blood, and satisfy the need to kill.

Mind you, these choices must be made as the Solace drifts along in a galaxy turned upside down by the fall of Cadia.

The core encounters in The Lords of Silence involve the assault of an agri-world, taking part in the assault of a Forge World, and an attack on a fortress-monastery. In each situation; Wraight does an outstanding job of bringing the relentless tactics of the Death Guard to undying life – they have all the time in the universe, and can afford to play the long game.