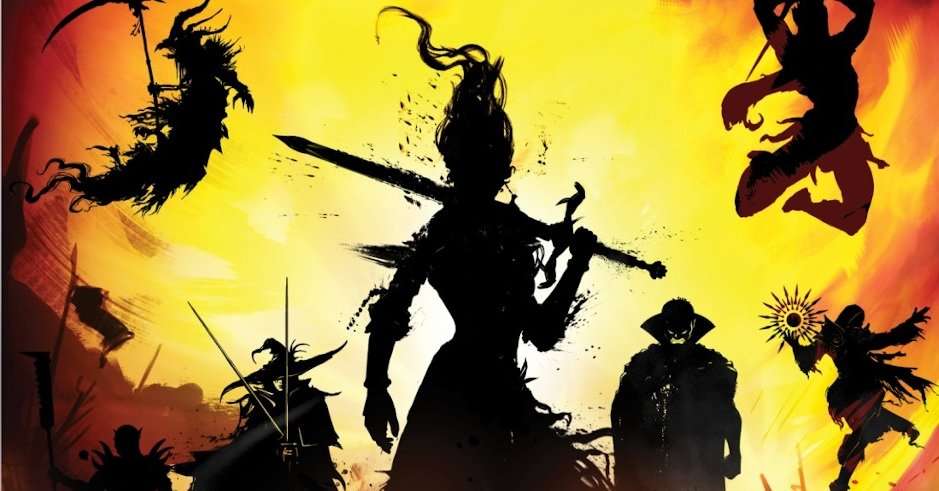 The Maleficent Seven from author Cameron Johnston is an interesting, bloody, action-packed novel that starts big and doesn’t let up. Starting at a point where most novels would end, The Maleficent Seven brings a bunch of grim, weary bastards together to protect a town threatened by the march of a seemingly unstoppable army of fanatics. Humour, blood, and a lot of bad people doing bad things – The Maleficent Seven is a book you will not want to miss. The tagline alone drew me in.

When you are all out of heroes, all that’s left are the villains… 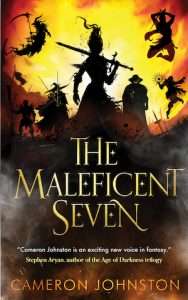 Forty years ago, the terrifying demonologist Black Herran led a mighty army to the edge of complete control over an entire continent. And then she walked away. Now, she must convince the bitter allies she abandoned to fight for her and protect the small town where she raised a family and left the battles behind. An army led by the divinely guided Falcon Prince and numerous zealots are conquering the land and extinguishing all other cultures and religion. The only option Black Herran has is to get her old group back together and stop the furious march of the Falcon Prince. The unique opening of The Maleficent Seven allows Johnston to guide the reader in a world that has a lot of history and the characters feel as though they have lived interesting lives and start the story at a point where it is easy for a reader to understand each one and the way they behave. The titular seven are bitter and hold grudges but are forced to come together as they are called on by their old leader. They are a group of menacing, evil bastards but they each have their own desires and challenges that make it easy to root for them as they aim to put a stop to the rampaging Falcon Prince.

Obviously, The Maleficent Seven is a play on The Magnificent Seven and it follows the pattern of an unlikely bunch of warriors banding together to defend the innocent that has been seen from Kurosawa’s Seven Samurai to Matthew Harffy’s brilliant A Time for Swords. Though filled with enough twists and surprises to keep the reader engaged, the main plot is simple and it allows room for the band of oddballs: a demonologist, an orc, a vampire, a necromancer, a tired demigod, a pirate queen, and a mad scientist, to be fleshed out. Some characters definitely feel more rounded than others but none come across as wasted words. Tiarnach, the demigod is a particular favourite. He carries a lot of the humour in the story and though he appears at first to be nothing more than a washed-up demigod, his arc was one of the most interesting to read as the story reached its conclusion.

The world of The Maleficent Seven is dark and full of suffering for its people. It is a world that seems to be constantly at war: first with Black Herran and her captains’ conquest and then march of the Falcon Prince. It is a dark and bloody world but one that has so much potential for further stories. Johnston gives enough backstory necessary for the characters and the story to be told with clarity but he also holds back and offers hints at a wider world that is begging to be explored. His interesting take on orcs and vampires, as well as the demigods walking the continent and pirates sailing the seas mean that there is ample room for him to explore beyond The Maleficent Seven.

The Maleficent Seven is a fun, thrilling, and bloody novel filled with interesting characters and a unique world. If you are after the fantasy version of The Magnificent Seven with a bunch of bitter villains then this is the book for you. It is an entertaining and fresh take on a concept that has worked time and time again. By the time you finish, you’ll be begging for more of Black Herran and the gang.

The Maleficent Seven is out August 2021.