Anthony Ryan’s latest novel is the sequel to last year’s brilliant The Pariah and is the second book in The Covenant of Steel series. The outlaw Alwyn Scribe survived the events of The Pariah and now finds himself on a journey across a land filled with unrest as religion and rebellion lead to bloodshed. Alwyn does his best to keep a dark secret from coming to light as he climbs the ladder from outlaw to spymaster and sworn protector of the Risen Martyr Lady Evadine Courlain. 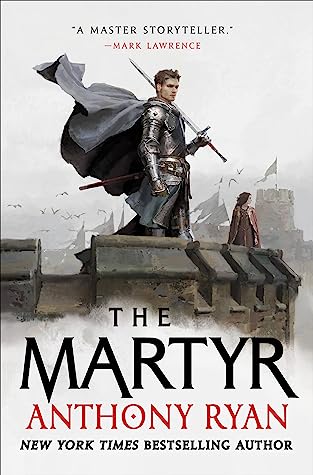 Hiding the truth of Lady Evadine’s return to life, Alwyn keeps close to the woman called the Risen Martyr by the fawning masses they meet on the road. As in real life, belief and faith are strange things in The Martyr. Being a part of a religion doesn’t always mean having the same views and the lands are divided by arguments regarding faith and the ways in which folk should display their beliefs. The church isn’t too fond of Lady Evadine’s apparent resurrection, preferring their martyrs to remain dead but King Tomas is all too aware of the usefulness of Evadine and the masses who now follow this inspirational figure. The world is grim and dark, and the medieval setting calls for the commoners to be the ones who have to deal with the idiocy and greed of those ruling in power. Alwyn shows his wits and courage once again, working his way into beneficial situations and always looking for escape routes when he inevitably gets into danger. Alwyn’s closeness to Lady Evadine and his unease with the situation created by the secret of her resurrection creates suspense that the reader can feel creeping its way from the pages as another example of Ryan’s masterful storytelling.

Telling the story once again is Alwyn Scribe. There is an element of mystery throughout The Martyr as the memoir-style feeling of the tale opens up the possibility of Alwyn being an unreliable narrator. This personal way of telling the story allows the reader to really get into Alwyn’s head and feel his emotion and the reader’s emotions will often align with Alwyn’s as he writes about people whom he loves and hates and brings his own prejudices and beliefs which sometimes change along the journey. Ryan’s prose continues to be a particular strength and his writing really brings the reader into Alwyn’s mind with the characters and the world feeling like living and breathing entities. There is great depth to the worldbuilding that allows the reader to have that feeling that there are other adventures taking place around the main journey with many subtle lines and actions displaying that there are more things going on around Alwyn. Ryan again proves himself a master at creating a tangible, breathable world in this first-person style and there aren’t many better at it. Fans of Bernard Cornwell (The Saxon Stories) and Matthew Harffy (Bernicia Chronicles, A Time for Swords, A Night of Flames) will love the style and be hooked from the first page to the last.

The Martyr continues the brilliance of The Pariah with more grit and adventure that Anthony Ryan fans and newcomers will devour. An intriguing tale with commentary on the difficulties that face the common man when those in power think only of themselves. With a charismatic lead and a grim world full of interesting characters, this book is destined to be on many readers’ top ten lists by the end of the year!

Read The Martyr by Anthony Ryan