REVIEW: The Order of the Pure Moon Reflected in Water by Zen Cho 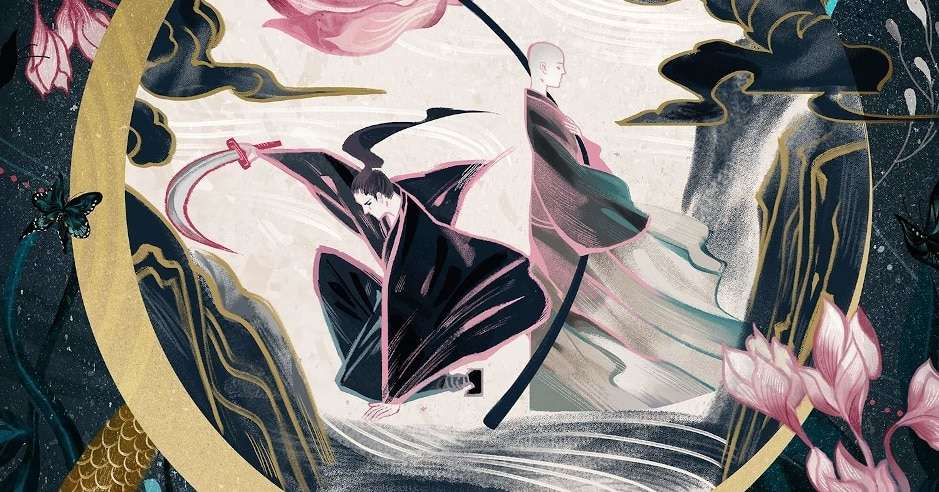 The Order of the Pure Moon Reflected in Water is the new fantasy novella from British Fantasy Award and Hugo winner, Zen Cho. The story follows a small gang of “roving contractors” (aka bandits) as they attempt to hawk extremely valuable stolen—or perhaps preserved—goods. When the gang is forced to adopt a former nun turned coffee-shop waitress into their band, dissension, mystery, lust, violence, and bad cooking ensue.

The story is perfectly adapted to the novella format. It features only a few main characters, and we become intimate with them. It is told in the point of view of Tet Sang, the second to bandit leader Lau Fung Cheung. Tet Sang is a quiet, somewhat sullen bandit in tattered robes that seem to show fallen luxury. He is also a wuxia master. He often has to lead the gang because its actual leader, Lau Fung Cheung, is too beautiful to appear in public in most situations. He attracts too much attention. People can’t stop staring at him, and that’s not good since he is a wanted bandit. So “clay-faced” Tet Sang must perform much of the bandits’ public duties, such as trying to fence the stolen goods. Guet Imm is a nun who joins them, much to the chagrin of the other members of the all-male gang, after she is fired for causing a ruckus at the coffee shop. She is very smart, beautiful, and still dedicated to the temple. She has lived much of her life in the Temple of the Pure Moon and has no family. She has nowhere else to go, so she joins Fung Cheung’s gang. But there is something keeping her there beyond just her need to find something to do. These three main characters have a uniting drive to find better lives, or at least survive, in the war-torn southern peninsula, but it is the tension between them that creates such an entertaining story. They are bandits, but they don’t commit “bad crimes,” so they are caught in a kind of limbo between the tyrannical Protectorate, which is clamping down on bandits and reformists, and the actual bad bandits, who will steal their stuff and kill them.

The secondary characters are also excellent. Ah Boon is a bit of a healer. He helps the bandits with their wounds. He is the only one who is eager for Guet Imm to join the men, but when he finds out she won’t fuck them because she is a nun, he gets extremely angry. Ah Hin is a bit of a drunkard and a secret zealot. He is angry that they took in a woman who can’t even cook, and after a short experiment in inedible food, he must resume the duties.

I loved all these characters for their flaws as much as their good characteristics. However, as happens in the best (dare I say ‘literary’) fantasy, the characters’ relationships are what really shine here. What attracts Guet Imm to the bandits? Why is Fung Cheung so faithful to his second, Tet Sang? What keeps Ah Hin in the gang? All the questions arise from the fabric of the gang’s relationships and develop beautifully throughout the novella, right up to the inevitable but shocking ending.

On the surface, The Order of the Pure Moon Reflected on Water is a pretty grim tale about hapless, hungry bandits trying to survive amid poverty, war, and tyranny. In this sense, it is like a lot of grimdark novels and novellas and is pretty much standard grimdark fare. But Zen Cho is so fucking funny that the story becomes as darkly humorous it is grim and pathetic. It’s rare balance that I’ve found only a few times in the likes of Rob Hayes’s Never Die, Mark Lawrence’s Red Queen’s War, and several of Abercrombie’s novels. Not only is the narrator subtly humorous, but the characters are freaking hilarious, mostly unintentionally, often delightfully crudely.

Although The Order of the Pure Moon Reflected on Water is not brimming with violence—there are fights and killings, etc., just not in every chapter—the story sits right in the morally grey area of the best grimdark. We genuinely care about these characters even though they are armed bandits who are attempting to fence stolen goods. They want top dollar for their stolen goods, and will do almost anything to get it. But they are also practically hopeless. There is nothing else they can really do. War and strife have torn their country apart, and poverty is rampant. They are on the Protectorate’s wanted list of bandits, and even the other bandits want to kill them. They must do what it takes to survive.

Anyhow, The Order of the Pure Moon Reflected in Water is a brilliant novella. It provides all the entertainment, action, surprises, and hilarity one could want from 33,000 words, but in the end, it makes you think about people, their lives, their relationships, their motivations, and their futures. I most highly recommend this book to discerning readers of grim fantasy as well as to ‘literary’-type folks who enjoy books like Alix E. Harrow’s also-brilliant The Ten Thousand Days of January. And even though there are so many more new books to review, I think I’m going to have to dive into Zen Cho’s back catalogue for a bit first. 10/10.

The Order of The Pure Moon Reflected in Water is scheduled to be released by Tor.com on June 23, 2020. Do yourself a favour and read it.