The Pale Horseman is the excellent continuation of Uhtred of Bebbanburg’s story. Set between 876 – 878 AD, Uhtred is now in his early 20’s, having proven himself as a man and a warrior. He’s fought in a shield wall, killed Ubba in one on one combat, and has sworn an oath to the Saxon king Alfred. Uhtred believes life revolves around fighting, women, ale, and creating a reputation. Uhtred has a reputation now, but it is not always glowing as he is as misunderstood as he is feared. He’s a complex lead character that I can’t get enough of following. He’s half Saxon and half Danish, however, his loyalties lie with the Saxon’s here, although he is extremely fond of his brother and friend, the Danish Earl Ragnar, and I loved the page time that they shared together.

“When I was twenty I considered myself a full-grown man. I had fathered a child, fought in the shield wall, and was loath to take advice from anyone.” 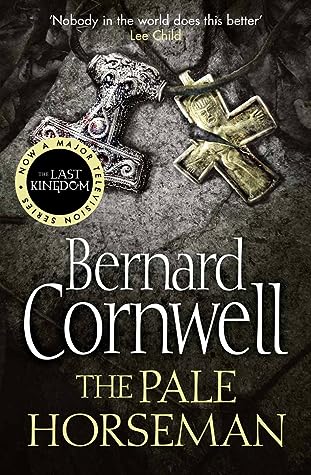 Following The Last Kingdom’s climactic battle with the Danes at Cynuit, Uhtred wishes to return to his family and his estate instead of returning to King Alfred with Ubba’s war axe and banner to claim the victory and the spoils that come with it. In Uhtred’s absence, the slimy lord Odda the Younger claims to have led the Saxons to their victory and to have bested Ubba himself. When Uhtred returns to Winchester he is shocked to see that there has been no mention of his extremely influential input to the events of the battle. Uhtred’s longtime friend Father Beocca was not even aware that Uhtred had escaped from being a hostage of Guthrum. Odda’s weaving of events to paint himself in a perfect light, the fact he glosses over Uhtred’s importance completely, and that none of Odda’s followers are willing to contradict him even though they know the truth of the matter, really pisses Uhtred off. Uhtred expresses his dissatisfaction as only a man as headstrong as the lord of Bebbanburg can and unsheaths his sword in the King’s chamber in the presence of all the men of influence in Wessex. Uhtred should have received a hero’s welcome but what he gets is anything but, planting a seed of loathing and an atmosphere of discord.

“We make much in this life if we are able. We make children and wealth and amass land and build halls and assemble armies and give great feasts, but only one thing survives us. Reputation. I could not walk away.”

Uhtred’s dream is to take back his rightful home of Bebbanburg where his uncle unlawfully sits as Ealderman. He realises that by following Alfred and giving his blood, sweat, and tears to the monarch isn’t going to make him the silver to raise an army to complete his objective. So, alongside the gruff warrior Leofric, Uhtred and some followers decide to take one of the King’s ships, to dress it up as a Viking raider, and to do some raiding themselves under the disguise of being Danes.

During The Pale Horseman, there are expertly crafted battles, skirmishes and duels that are gripping to read about. We are introduced to fine new characters such as the lord of war Svein, the Shadow Queen Iseult, and the loyal but dim warrior Steopa. My personal favourites from the first novel such as Leofric and Young Ragnar shine here too although in some cases have limited page time. Characters relations change and develop finely through Uhtred’s unique, honest, and extremely personal first-person perspective. I trust and understand Uhtred’s opinions and plans however reckless they seem or provoking they are to the church of the crown.

The Pale Horseman was more of the same of what I adored in The Last Kingdom, however, if all of the novels in this series are so similar then I can see myself getting a bit bored about halfway through the series. I hope that doesn’t happen and that Cornwell continues to present exciting, action-packed historical fiction during the next stages of Uhtred’s life whilst keeping it fresh and interesting enough to keep me intrigued. A huge positive for these novels, so far, is that at around 300-400 pages, I am able to race through them in a couple of days. I have Lords of the North already loaded on my Kindle and am ready to start reading that today to rejoin Uhtred in the front row of the shield wall. Fate is inexorable.

“The fear came then. The shield wall is a terrible place. It is where a warrior makes his reputation, and reputation is dear to us. Reputation is honour, but to gain that honour a man must stand in the shield wall where death runs rampant. I had been in the shield wall at Cynuit and I knew the smell of death, the stink of it, the uncertainty of survival, the horror of the axes and swords and spears, and I feared it. And it was coming.”