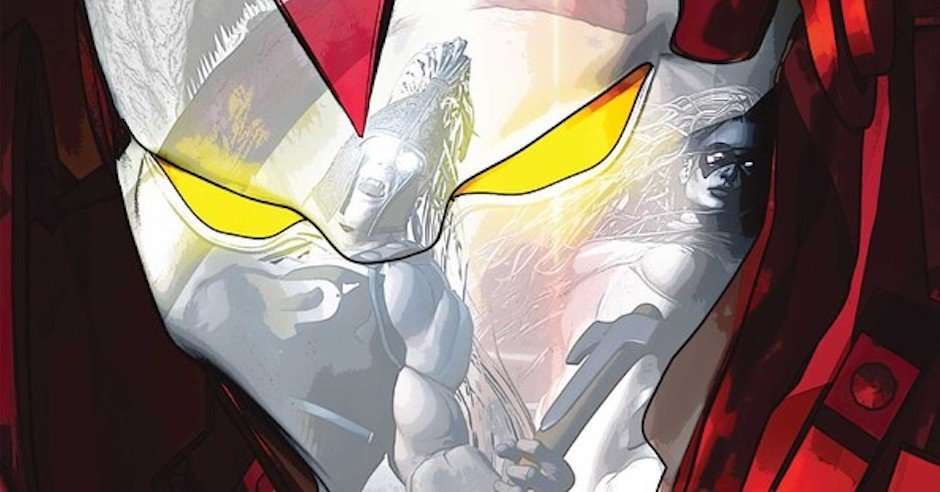 Growing up in the late 1970s and early 1980s, I was a dedicated Marvel Comics fan. By the time I got to my late teens and early 20s I went through an unfortunate too cool for comics phase. While I’ve since come back to embrace my love of comics, I’ve been focused more on DC, Valiant, and independent and small press comic worlds. David Guymer’s The Patriot List made me regret not keeping up with Marvel Comics lore. Armed with 30 year old memories and the recent MCU films and tv shows, The Patriot List was something of a mind fuck. I was not prepared for the world of the Dark Avengers, but I’m so glad I stepped inside. 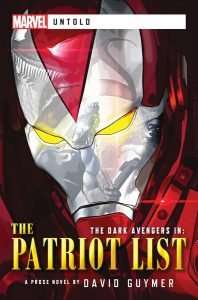 The Patriot List takes place after a series of major events, including a massive alien conspiracy, allowed Norman Osborn, formerly the villain known as the Green Goblin, to assume control of S.H.E.I.L.D. and then the Avengers. Rebranding himself the Iron Patriot, Osborn’s Avengers i.e., Dark Avengers, have replaced the familiar heroes with villains in disguise. Psychotic assassin Bullseye now wears the guise of Hawkeye.  Alien symbiote Venom now impersonates Spider-Man. Wolverine’s sociopathic son Daken has assumed his father’s identity. And while the team puts forth a false front, pretending to be the earth’s mightiest superheroes, they are in fact Osborn’s private militia, the muscle enforcing and expanding his lust for power.

It would be unfair to criticize The Patriot List for not explaining more the background of its world. I can’t imagine anyone who would pick this up to read wouldn’t already have at least a passing understanding of the Marvel Comics Universe thanks to the movies and television shows. And much to its credit, The Patriot List does a good job of filling in the blanks well enough to have the story make sense. I did refer to Wikipedia a few times to enhance my own understanding, but even that wasn’t necessary. The book gives you enough that you can enjoy it without revisiting decades of source material.

The real draw here is the action. The Patriot List is a fast paced, action packed novel filled with bad people I wanted to see succeed and fail at the same time. The Patriot List does a great job of capturing the action and witticisms of a comic. Prose descriptions of action and combat can be a weak point for many writers, but Guymer pulls it off well. Even sections of dialogue and exposition have a tension to them, as though a fight could start any moment. The Patriot List is a page turner I found hard to put down.

Guymer does a great job with characters that aren’t his. The closest The Patriot List has to “good guys” are Osborne’s naively well intentioned second in command and terrorists who would blow up civilians in pursuit of a higher cause, not just fun and fortune. There’s not a single character in this book I’d trust as far as I could throw them. The book had an interesting feel, in that I wasn’t rooting for anyone, or hoping for a greater overall victory – I was just waiting to see what would come next. Occasional scraps of decency would appear from time to time, just enough to keep the nihilism at bay.

My biggest complaint about The Patriot List is that, as part of the larger Marvel Universe, I knew there wouldn’t be any major changes to the world’s status quo. Some of the characters took their lumps, for sure. But this was certainly not going to be where Venom met his end, or where Wolverine’s boy Daken is hurled into the sun. Again, this is not a knock against Guymer, and it didn’t take away from my enjoyment of the book. It just told me that no matter how intense the action, there’d always be a limit to how far the story could go.