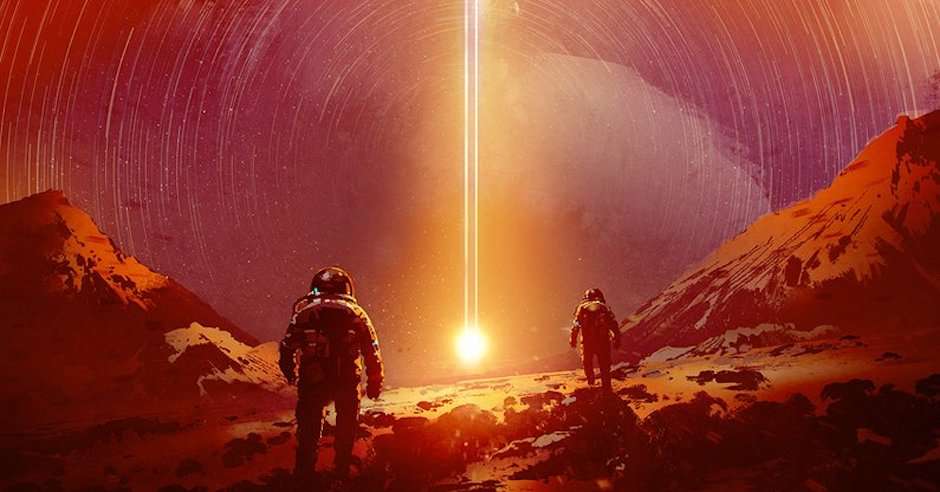 The Razor is the new science fiction novel by J. Barton Mitchell, author of the acclaimed YA sci-fi series The Conquered Earth. This one’s not YA, but it won’t cause you any adult discomfort either. It’s the story of four people—three prisoners and one doctor—on the prison mining planet 11-H37. As in most good science fiction, the setting plays an instrumental role in the plot. In this one the setting is the Razor, a thin line on the 11-H37 between the Cindersphere, the burnt hemispheric wasteland that always faces the planet’s star and the Shadowsphere, the frozen hemispheric wasteland that never faces its star. The overlapping area between these two spheres manages to have an atmosphere similar to our own earth. Prisoners on the planet use high-tech machinery to mine xytrillium, the most powerful fuel in the galaxy. When something goes wrong with the planet’s main space station, all the staff and guards evacuate leaving the prisoners there to die. Can the four heroes save themselves? Well, we don’t really find out, but that doesn’t prevent The Razor from being a wicked fast-paced, action-packed read that, although not perfect, is a helluva ride from start to finish. 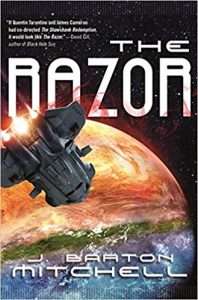 The Razor has four main characters. Foremost among them is Flynn, a genius engineer and former employee of Maas-Dorian, the company with mining rights to the planet. He has been sent to 11-H37 for murder. The other main male character is Maddox, a former ranger-guard on the planet, also imprisoned for murder. There are also two main female characters. Key is a longtime prisoner and total baddass. And Raelyn is a doctor in the Razor’s medical facility. I mention the characters’ genders because they will inevitably get involved in predictably normative love relationships, which is the one element of The Razor that I found as cheesy as a stuffed–crust pizza. There’s nothing wrong with it overall, I guess, but the coincidence that the main characters are all beautiful and neatly self-divide into obvious couples made me sceptical of the novel’s grim sincerity. Nevertheless, it didn’t ruin the novel for me. It has, as they say, other qualities. Here are some of them:

The Razor reads at warp speed. Despite being a hefty 400 pages, it is written with short sentences, short paragraphs, and short character interactions that race along as fast as your eyes can absorb them. This technique, in this particular book, is very effective. The story moves very quickly, and as it does the writing gets choppier and more frantic in a good way, creating a very tense atmosphere. Mitchell wastes no words in pushing the plot along to its ultimate fiery finish. By the time the characters are desperate to escape, and the heat is out of control, and the creatively imagined monsters are after them, and the thousands of other prisoners want to kill them, and they want to kill the other prisoners, and one crazy lady might kill them all, it’s like a train wreck you can’t peel your eyes from.

Likewise, the setting of The Razor is extremely well executed. Although the characters never make it to the Shadowsphere, the Razor area is nicely described and believable enough, and the Cindersphere is brutally well realized. Readers will feel the love that Mitchell put into this setting. Everything is fucking hot as hell, and Mitchell shows it by having his characters stuck out there at various times (in specially designed suits of course) with complications trying to get in and out of their giant mining rovers and supply carriers. Not to mention a giant firestorm that is rapidly approaching. And because the setting is so fundamental to the characters’ reasons for being there in the first place, for their reasons to get the hell out of there, presumably for the anomaly that creates xytrillium, and for other atmospheric problems that prevent movement to and from 11-H37, it is a major highlight of the novel and no doubt why the novel is named for its setting. I must say here, though, that I am not a scientist, so I cannot say that any of this setting could actually happen. For example, 11-H37 revolves around its star but does not rotate, as such. Is it possible for a planet to always have the same hemisphere face its star? Who knows? And if you do know, don’t tell me and ruin it.

The action scenes in The Razor are brutal, fast-paced, tense, and exciting. Mitchell really knows how to pace the action to make it feel real. Each mini-climax builds from a tense creepiness to all-out mayhem in way that relentlessly pulls the reader into the maelstrom. Whether the conflict is between characters, the characters and the blistering environment, the characters and the other prisoners, or the characters and the original inhabitants of 11-H37, it is extremely well paced and described with stripped down language that has a certain menacing brutality of its own. If anything in The Razor should please grimdark fans, it should be the nearly constant barrage of action and violence, none of it gratuitous, all in support of the conflict that forms the backbone of the story. It’s good stuff.

So is it grimdark? I had my doubts at first. In the beginning Flynn really seems like a goody-two-shoes who has been victimized, but by the end, he begins to question what is right and what is wrong. He must balance a couple of enticing, selfish interests with the interests of his friends and the world at large. Key also factors in the grimdarkness of the story since she has lived a life of irredeemable badness, and even Flynn’s love for her can’t change that. Even though the four main characters, and at least one other secondary character, seem to be trying to do the right thing, the ending of the book is inconclusive, and its openness definitely leaves room for an ultimately full-fledged grimdark ending of the series that I expect to follow.

Whether it spawns a series or not, though, I think readers of grim sci-fi will definitely enjoy The Razor despite its slightly corny romance subplots. I recommend picking it up if grimdark sci-fi is your thing.

The Razor by J. Barton Mitchell is scheduled for publication on 27 November 2018 by Tor Books.