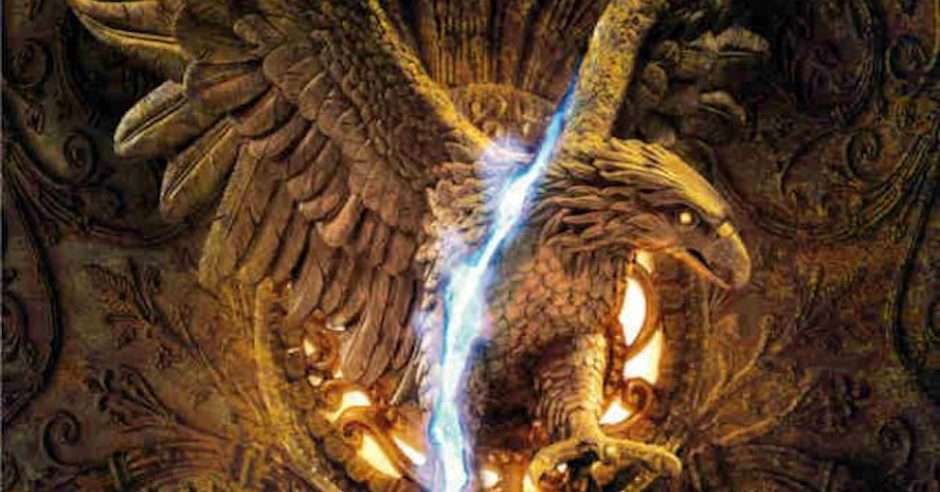 For a good while now, friends have been telling me Stephen Donaldson is an author I need to read. When The Seventh Decimate came up for review, I jumped at the opportunity even though I am yet to read the Thomas Covenant books. To be blunt, this book was a bit of a frustrating read. It could have – should have – been better than it was, but the protagonist didn’t allow for it. 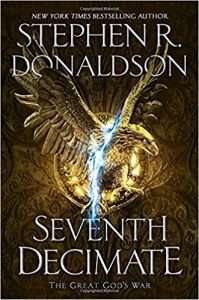 In The Seventh Decimate the people of Belleger suddenly find themselves without the power of their mages. Trapped between impassable ocean cliffs, an unmapped desert, and the hated Amikans, they are a people on on their last gasp of life – unable to survive without the magic of the six Decimates (fire, pestilence, cold, earth, etc), and unable to defend themselves against the Amikan’s own mages who have surely maintained their own magic while cutting off that of the Bellegers. Prince Bifalt and a troupe of ten soldiers are sent out to cross the desert, find a library that likely doesn’t exist, take a book that the Amikans have probably already stolen, and save his homeland from absolute and total destruction.

Now, I say I found this book frustrating due to the main character, and I want to get it off my chest early, because there is plenty to like about this book and impending series, and I want to focus on that positive. But first: Prince “I can only be angry” Bifalt. He’s one of those characters I feel so many of us wrote as young men when we dreamed of writing grandeur because we thought it was badarse. He’s angry. All his other emotions get channelled into anger. We know this because we are consistently told (not shown) this. Bifalt could win the lottery or walk in to the bathroom and discover a surprise gold-plated toilet seat and he’d probably still get angry. Now, there’s nothing wrong with an angry character – there are angry people in this world, so we need angry characters – however (a) his reason for being so angry seems a bit of a bloody stretch to me, and (b) he just doesn’t grow or develop away from that anger. Or at all. He’s this one, flat, cardboard cut out anger merchant the whole way through. It drives every decision and kills every surprise.

I found him so frustrating I actually head-desked a few times. I know it pays to have characters sometimes do silly things to drive plot and / or have the reader tearing out their own hair, but FFS, it just got ridiculous and, to be frank, boring. Okay, now that I’ve got that off my chest, let’s talk about the rest of the book.

The story, despite the protagonist’s best efforts to anger-hump it to death, is actually pretty engaging. The broadening of the story comes along pretty late in the book, but it widens the scope quickly and has you wondering where book two is going to go – something I like as part of a book series. The secondary characters could have done with about 20 more pages fleshing out throughout, but I enjoyed them, I enjoyed their realistic death styles where you were just getting attached to a soldier and next moment he was a casualty. Such is the perilous life of the secondary character in a dark fantasy quest.

The magic system is awesome. I like the idea behind it, the sheer destruction, each Decimate enough to easily kill one in ten people it’s aimed at, yet also with the power to heal. The developments later on down the track provide a lot to look forward to as it’s developed. The theme of your world only being big as you are able to see is an interesting one, and applies to all parts of the book, including the magic system.

The ideas in The Seventh Decimate deliver plenty of awesome moments: the decimates are an excellent idea, the warring nations, the realisation that their world is so small compared to the actual world, the quest, the rifles, the Last Repository, the diversity of cultures … all of it screams for a central character worthy of telling a story in this setting entwined within a broad and promising overarching story arc. The Seventh Decimate does not boast that character. Prince Bifalt is one of the most frustrating and e