I love a carefully conceived, beautifully executed, challenging narrative, but if someone had told me that the new novella by Daniel Polansky (Low Town trilogy) was written in the second-person point of view, I might have passed on it, which would have been a HUGE mistake. The Seventh Perfection is a gripping, strange, and grim story that will satisfy multiple readings (which, unfortunately, I did not have time for before this review). It is extremely unconventional in its narrative execution, but the narrative is absolutely perfect for the story, and the story is absolutely perfect for the shorter format of Tor.com’s excellent novella series. 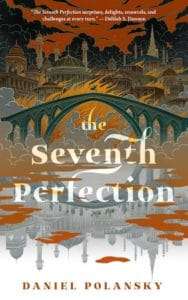 One thing I (usually) dislike about second-person narrative is its propensity to use the word you a lot. ‘You go up the stairs. You see….’ I just don’t buy it most of the time. I find it hard to suspend my disbelief, as Coleridge might say. The Seventh Perfection avoids that completely, and almost entirely flips the problem on its head. In The Seventh Perfection, you are Manet of the White Isles, an amanuensis of the God King Ba’l Melqart, who lives in the Spire in the middle of the city. Manet is one of the very few people who have completed the seven perfections, specialized trainings for servants of Ba’l Melqart, the seventh of these being the development of perfect memory. When Manet receives the gift of a locket with a faded portrait inside, she begins an investigation to find out who the woman in the portrait is, which brings her to various people around the city who might know. Each chapter of The Seventh Perfection comprises a character telling Manet what they know, or don’t know, about the locket. As such, each chapter is named for the character who tells, in first-person point of view, Manet what he or she knows about the locket; hence, the flipping of the second-person narrative on its head. And you, Manet, have to figure it all out. That alone would be a pretty compelling read; however, the locket leads to a story that the servants of Ba’l Melqart do not want known, and there’s the rub.

As she quests through the city, Manet talks to a variety of strange and stranger people, from a street hawker, to an antiques collector, to a witch with a rat, to an old friend, to the Patriarch of the city guards, to a ferryman, and more and more. Each character has a unique voice and a unique story to tell. Manet listens and records everything in her perfect memory. When she visits Nutesh, a renowned and somewhat bumbling and notorious antiques collector, early in the novella, the narrative voice of the collector immediately called to mind Robert Browning’s most famous poem “My Last Duchess,” in which the reader is addressed (presumably) by the Duke of Ferrara who explains what happened to his late duchess in the portrait he is showing off. The poem is widely recognized as a classic example of the dramatic monologue form (and you should read it if you haven’t already because it’s great).  And that’s what you’ll find in The Seventh Perfection, twenty-eight widely varied and variously hysterical, intimidating, conniving, helpful, deceitful, and confusing dramatic monologues (and one trialogue) told to you, the amanuensis. To make matters worse (which means, of course, to make them much better), rumours of your investigation are beginning to circulate around the city, and the guardians of the God King do not like it one bit.

Importantly, as it turns out, the monologues of the people Manet encounters ultimately unveil the history of the city itself, which has recently undergone a revolution of sorts by which, for better or worse, the God King replaced an equally feared and mysterious queen whom he renamed the Anathema when he deposed her. As often happens in political upheavals, most of the people, the subjects of these rulers, couldn’t care less who lives at the top of the Spire, so long as they don’t change anything very much. The people are just as willing to revere the God King as they were the Anathema, as long as they can still drink and whore and go about their business. This moral and political ambiguity reminds me a bit of the constant battle between the North and the Union in Ambercrombie’s First Law. Neither side is worth a shit, but the upheaval is constant.

Manet’s quest for information must ultimately lead to the Spire, of course, but is that a good thing or a bad? We don’t really know. Will she press the city into another seemingly purposeless violent upheaval? Maybe I’ll find a clue when I reread the book again starting tonight. But that’s one of the beauties of moral ambiguity and one of the reasons we love grimdark so much – we get to decide … or not decide.

So … getting down to the point: Polansky is a fucking genius. If you don’t already know that from reading the Low Town trilogy, you will realise it when you read The Seventh Perfection. He took an unconventional form, the novella, and practically reinvented storytelling for it. For example, (and don’t tell my editing clients this), the inciting incident in this story could be said to happen about ninety percent of the way through it. That’s very unconventional, but here, it’s just the way it happens, or at least how we find out about it. Similarly, the main character never says a word, and yet we learn her life story. There is no ‘narration,’ per se, but the reader is thrust through the city at a rapid pace in vivid detail. Though I’m sure the narration style has its roots somewhere, perhaps in Faulkner’s As I Lay Dying, I’m willing to bet you’ll find The Seventh Perfection to be like no book you’ve read in recent memory.

And memory is what it’s all about, the main theme here—how do we form memories and can they be trusted? Are they really whole or just fragments we put together? The seventh perfection is memory, and those few people who achieve perfect memory, like Manet, become the memory of the realm. In her quest she explores the memories of twenty-plus people, looking for answers, trying to put pieces together. And the memories of the people she talks to, flawed or not, hold the unreliable memory of the realm and her life. But not only are their memories fallible and flawed, many of them have something to hide and others are intimidated by her position within the realm itself. For me, themes are secondary to compelling characters in tense emotional situations that result in riveting entertainment, but The Seventh Perfection seems to have it all—can’t-put-it-down reading with layers and layers of meaning.

The Seventh Perfection, as you might have guessed by now, is not necessarily an easy read. It will challenge your notion of storytelling and force you to put pieces together that otherwise might have been laid out in the usual expository passages, but this is really what makes it such an involving, enthralling read. There are no armies or staged battles here, but there is a shithole of a grim setting, some violence and the constant threat of more, and a moral vacuum that will force you to make up your own mind about who is good and who is bad or if such a thing even exists in this world. Overall, I found it to be totally fucking brilliant, but if you’re looking for the same old thing, you won’t find it here.

The Seventh Perfection by Daniel Polansky is scheduled for release on 22 September 2020 by Tor.com.