REVIEW: The Shadow of the Gods by John Gwynne 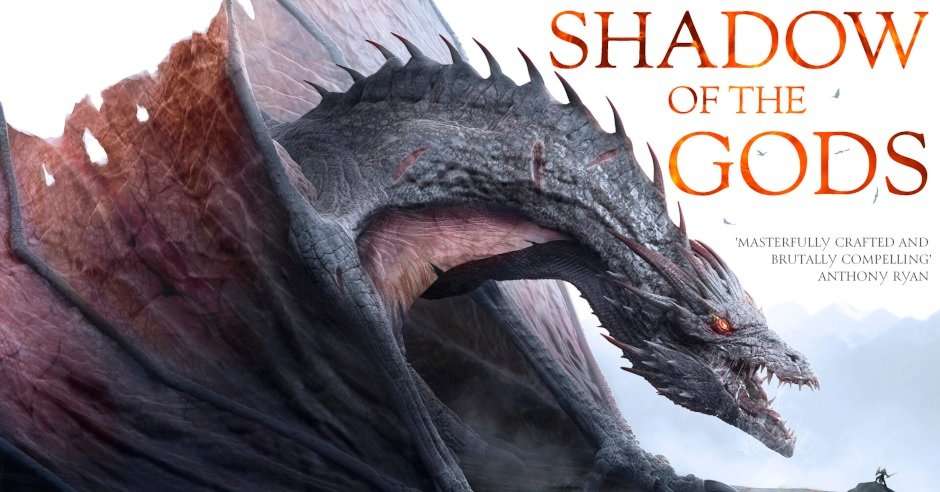 I received an uncorrected proof copy of The Shadow of the Gods in exchange for an honest review. Thank you to John Gwynne and Orbit Books.

The Shadow of the Gods is a gritty and violent Norse mythology-inspired tale that features monsters, magic, vengeance, warbands, and shield walls. It takes place approximately 300-years after the Gods of Vigrið fought and battled themselves to annihilation and follows three distinct point of view perspectives as they traverse Gwynne’s well-realised dark fantasy world.

These characters are Orka, an ex-warrior who lives with her husband and son at a quiet steading, Varg, a thrall who is running to escape his slave masters, and Elvar, a young warrior who is trying to find battle fame with the monster hunting warband the Battle-Grim. They all have deep and interesting pasts of which we are given more details of as the story progresses. Through the eyes of these characters, I was engrossed from the very first chapter and by about the fourth chapter I was chuffed to see that Gwynne had worked his magic again.

Gwynne has crafted a fresh and unique fantasy world and adventure that I’d summarise as a mixture of some of the finest elements from Norse Mythology and Bernard Cornwell’s The Last Kingdom novels. (There are a few people who get called “arselings” as homage to Leofric I imagine and warriors in this world wish to die with a weapon in their hand.) It features The Witcher-esque monsters and heartwarming friendships and camaraderie that I also adored in Gwynne’s The Faithful and the Fallen series. It seems like Gwynne went into writing this series with big ambitions and wasn’t going to hold back on his vision. This world is as majestic as it is haunting, as macabre as it is beautiful. An example is that one of Vigrið’s main cities is in the skull of a dead god. The imagery throughout is phenomenal.

The Shadow of the Gods has dozens of excellent set pieces, standout moments, action segments, skirmishes, and showdowns. So often I finished a chapter with a cheesy grin knowing that something awesome had just happened and imagining how epic a live-action version of these scenes would be. Gwynne is one of the best in the fantasy game at writing thrilling fighting and brutal action moments.

For a 500-page novel, there is a huge cast of characters. The three main protagonists are all great to follow but I did find myself most excited when returning to Orka’s storyline. I think this is probably due to Orka’s arc being more precise and classic fantasy than Varg’s and Elvar’s who both find themselves as members of warbands. In the warbands, there is a wide mix of players from varying backgrounds, cultures, and skillsets. Einar Half-Troll, Rokia, and Grend were really fine supporting characters and some of the banter and humour is witty and wry. When we returned to one of the warband-focused point of views, I will admit that I sometimes had to refamiliarise myself with the crew of each faction and what they’d been up to during their last chapter as their missions and objectives were similar occasionally. Also worth mentioning, a nice touch that I really enjoyed was when one of the characters would mention another person the reader is familiar with from another story arc, fitting another piece in the puzzle of how the storylines may be interconnected.

So, why am I only giving The Shadow of the Gods four-stars? Without a doubt, The Shadow of the Gods was my most anticipated read of the year and all the reviewers I trust have given it glowing five-star reviews. Gwynne is one of my favourite authors and I think all of the aforementioned are reasons that I overhyped it to myself. It’s an excellent start to what I have no doubt will be a stunning and fresh fantasy saga. I awarded Malice and A Time of Dread four-stars each too and ended up adoring those series. In my mind, I expected the world’s most phenomenal fantasy standalone novel and on that front, it doesn’t quite deliver. That being said, the endings are fantastic, the set-up for the next novel is intriguing, there may be animal or monster companions(!), it’s an addictive read, and, knowing Gwynne’s previous work, I think every book in the series will build on these fine foundations to a conclusion of epic, possibly world-shattering proportions. Gwynne’s a talented wordsmith and the next tale in The Bloodsworn Saga will probably be my most anticipated read of the year when that’s released too. If you haven’t read any of Gwynne’s books yet, The Shadow of the Gods might be the best place to start.

When searching for the main image for this review I came across an article about the amazing cover’s creation by the artist Marcus Whinney which you can see here. I implore you to check it out.

Read The Shadow of the Gods by John Gwynne