The Son is an epic novel that scales the history of the American west over three generations of a family, the McCulloughs. It is an instant classic, a masterpiece and a heartbreaking story that does not shy away from the horrific and honest truth of how America was formed, right from its very bones.

“Follow your footprints long enough and they will turn into those of a beast.” 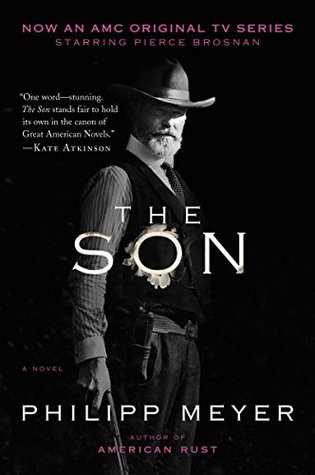 Philipp Meyer has written a book that immediately captured all of my attention. It follows three POVs of the McCullough family, Eli – born 1836, Peter – born 1874 and Jeannette – born 1934. After reading Cormac McCarthy’s awe-inspiring Blood Meridian I have not been able to get enough of the American West and have been on a reading binge focusing on the real ‘old west’ era. Because of this the thread written around Eli McCullough and his story was my main interest, but much to my surprise the two interweaving storylines of Peter and Jeanette sparked a need to know everything about them and what happens to them.

The prose within The Son is reminiscent of Cormac McCarthy. There are subtle differences in the language and a focus on other aspects of story-telling, Phillip Meyer has crafted his own style and it is completely wonderful. If you are a fan of Cormac McCarthy, you’ll be a fan of Meyer. His writing has no pride, no secrets, just brutal honesty and an extremely direct and breathtaking way of writing what happens to our characters.

“My brother began to cry out in his sleep; I started to shake him, then stopped. There wasn’t any dream he could be having that would be as bad as waking up.”

Eli is interweaved throughout all three stories, as he is the oldest and basically the ‘Don Corleone’ character in the Peter and Jeanette sections. However, Eli’s own storyline was my favourite by a long shot, even though there are some absolutely horrific scenes in these parts. Eli’s family are killed by a Comanche tribe when he is a young boy and they take him captive. He then must do all he can to adapt, survive and fight the cruel world into which he has been born.

Peter, Eli’s son, is at war with his father’s own fame and power, and bears witness to horrors himself that completely misshape his life. Jeanette, Eli’s great-granddaughter is a woman who is in a typically man’s world, who wants to show everyone what she can do and how she is a true McCullough.

“If you hate me it is because I have morals.”

The three characters and three timelines were written so well that it was not difficult to follow whatsoever, and over 561 pages of this epic story there is plenty of time to invest in all three and understand exactly what is underneath their layers. I found myself begging for more chapters of their stories, more depth.

“I might be killed any day, by whites or hostile Indians, I might be run down by a grizzly or a pack of buffalo wolves, but I rarely did anything I didn’t feel like doing, and maybe this was the main difference between the whites and the Comanches, which was the whites were willing to trade all their freedom to live longer and eat better, and the Comanches were not willing to trade any of it.”

There is everything for fans of literature here; the exhilarating gunfights on the Mexican border, the romantic, natural but deadly lifestyle of the Comanche Native American’s, the forbidden love of a rival-family member, a strong female character who is equal in standing to any Colonel, beautiful prose, a sweeping plot that lifts you from your feet and drops you in the saddle of an enthusiastic American Paint Horse. There is so, so much to like, so much to love. It instilled a love within me for the Comanche way of life, and invoked such sadness when characters I grew fond of died, or befell hideous accidents or tragedies.

“It is impossible to believe we are truly in God’s image. Something of the reptile in us yet, the caveman’s allegiance to the spear. A vestige of our time in the swamps. And yet there are those who wish to return. Be more like the reptile, they say. Be more like the snake, lying in wait. Of course, they do not say snake, they say lion, but there is little difference in character between the two, only in appearance.”

5/5 – There’s a lot of tragedy in this book. It is an epic tragedy of the birth of the West, of America and the rise and fall of a family changed by new ways of life. There is little joy or happiness within The Son, but it is an astounding feat of writing. You may read it and instantly want to make a bow out of deer sinew and osage wood, you may want to experience riding a horse in the dry plains of Texas, you may want to never dwell on the horrors that The Son highlights. You may, like me, experience all three.

Buy The Son by Philipp Meyer