Review: The Stars are Legion by Kameron Hurley 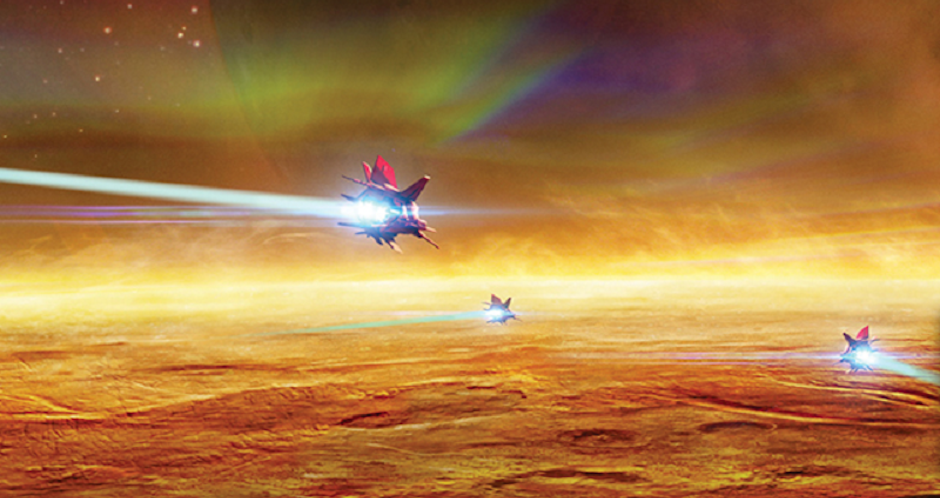 The Stars are Legion is the new space opera from critically acclaimed, two-time Hugo Award winner, author Kameron Hurley. It is the story of two enemy lovers, Zan and Jayd – the story’s two narrators – and their attempt to rebirth a world-ship, the Mokshi, that is capable of leaving their dying, deep-space Legion of world-ships at the Outer Rim of the galaxy. Although the first thing that comes to mind while reading The Stars are Legion might be the complete absence of male characters of any kind, the story quickly takes off on a fast pace with plenty of action, conflict, fighting, gore, tension, deceit, revenge, political intrigue, monsters, moral ambiguity, and brilliantly vivid and original world-building that will excite even the most diehard grimdark sci-fi fan. Meanwhile, the choice of an all-female cast sets a fascinating stage for the exploration of themes that include birth and rebirth, love, atonement, forgiveness, revenge, loss, hope, memory, and too many more to mention, all of which give The Stars are Legion the type of resonance that is supposed to be reserved for so-called ‘literary’ novels. And even though I generally find myself reading grimdark fantasy in the Lawrence, Polansky, Lynch, Abercrombie mold, I loved The Stars are Legion and couldn’t stop turning the pages and enjoying Hurley’s crisp, concise prose. The world-building in The Stars are Legion is what really pulled me into the story in the beginning. Unlike most sci-fi that I have read, the world of The Stars are Legion is almost entirely organic. The world-ships, of which there are primarily three in the story, are gigantic floating, tentacled living worlds with a seemingly unknown number of levels from the bottom, where people are recycled by terrifying monsters, all the way to the top, where the elite and powerful live and conspire. The entire world-ship is organic, made of some kind of fleshy substance that can be cut through to form new passageways, and eaten, if entirely necessary. It is alive with tubes like umbilici, and growths, and blood, and on the outside, a blackening cancerous rot, evidence that the worlds are dying and will continue to do so. Beneath it all, or at least in parts, are some mysterious metal beams and scaffolding that may have been part of the original structure or used to sure up the dying organic structure. When Zan, who has lost most of her memory, is recycled by the Lord of the Katazyrna world-ship, she and a small team of feisty misfits must climb back up from the bottom of the ship on a frightening journey to reunite with Jayd at the controls. This part of the narrative reminded me of some of my favorite story worlds like Jeff Vandermeer’s living organic New Weird settings in his Ambergris and Southern Reach novels and the climb through various vivid and scary places that Senlin must make in Josiah Bancroft’s Books of Babel series. Each new scene is stunning and surprising.

While Zan is climbing out of the bowels of the Katazyrna, Jayd the daughter of its Lord, has made a deal with her enemy on the world-ship Bhavaja. This part of the narrative propels the political intrigue conflict at breakneck speed. The Katazyrna and Bhavaja are long-time enemies but both realize that they are doomed unless they can combine powers to bring ‘the world and the arm’ together on the Mokshi to rebirth that world-ship and leave the Legion. However, neither the rulers of the Katazyrna nor the Bhavaja can be trusted. Both are brutal, self-seeking militant peoples who want to subjugate their enemies through intrigue, deception, and brute force, which is part of what we love about grimdark in any setting. The two world-ships are constantly at war for dominance, and something must change or they will both die out. When the best of plans goes awry, all hell breaks loose between these fierce, competing powers, and Zan must reunite with Jayd to settle their age-long war. All along, however, we become aware that Jayd has done something very wrong to Zan.

The intertwining first-person narratives of Zan and Jayd make for an extremely compelling and entertaining story, and Hurley’s use of present tense adds an extra level of suspense to the tale’s unfolding of a variety of interwoven plot types: quest, revelation, voyage-and-return, etcetera, all of which are thrilling by turns. Nevertheless, the complete absence of men or male characters in The Stars are Legion is kind of like an elephant in the room. As a male reviewer, I cannot decide whether it would be more sexist of me to ignore that casting decision in this review or to attempt to understand it and utterly fail. It seems like a lose-lose proposition to this humble reviewer, but since I consider myself a bit of a feminist and I enjoyed this book so much, I choose to take the latter risk. The lack of male characters in The Stars are Legion is never actually mentioned in the story itself – even awareness of their absence is absent. The only reason I can think of for this choice is that the story and its themes are more compelling without them. One main theme of The Stars of Legion deals with birth and rebirth – at what cost. There are so many things that need rebirth in this story – from Zan’s memory to her climb up the umbilical of the Katazyrna to the love between Zan and Jayd to the world-ship Mokshi itself – that the idea of rebirth takes center stage in terms of thematic relevance. There are wombs to be swapped and stolen, pregnancies to deal with, and even the world-ships themselves impregnate their passengers to birth their needed parts and peoples. Not only are men (male characters) unnecessary to this story world, but in the humble opinion of this reviewer, their inclusion would obfuscate or at least dilute the plangency of this theme. Even if men were just subservient to women in the story, their presence would add all kinds of complications and battle-of-sexes themes that the story does not require. The Stars are Legion is a fantastic read just as it is, and the choice of an all-woman cast is part of its charm and its grit.

Although The Stars are Legion seems, on its surface, to be sci-fi for women, I think any fan of gritty, violent, tense SFF will enjoy it; even fans of military sci-fi should find this story tense and forceful. Specifically for our purposes here at Grimdark Magazine, I think our readers will enjoy the relationships between these fiercely competing, brutal yet loving women. Jayd’s love for Zan provides perhaps the grimmest morally grey punch to the story as Jayd