The Sun Casts No Shadow by Mark Richardson follows Wellington Thorneycroft, a pickpocket doing his best to survive the soul-crushing urban dystopia of the City. Surrounded by unscalable walls, scorched with stifling heat, and cut off from the light of the sun by industrial smog, a resident’s only escape is Ambrosia–a narcotic pill that comes in an ever-expanding rainbow of flavors and effects. Clocking in at a tight 178 pages, the novel is narrated in the first person by Thorneycroft himself and begins with him meeting a mysterious woman promising the impossible gift of freedom and a life beyond the walls. 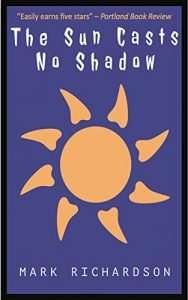 In addition to having a great name, Thorneycroft possesses a unique narrative voice that brings to mind the hardboiled radio detectives of old. Embracing the urban grime and moral decay of the City, he spends his days lifting wallets, getting high, and bankrolling half the City’s prostitutes. With most residents of the City finding work at the (capital-F) Factory producing a baffling array of products, Wellington chooses the dubious liberty of the streets instead. While he is an unrepentant crook, he does have a greasy charisma and earnest yearning for freedom that will charm many readers.

As a setting, the City itself presents a fascinating mix of noir, dystopia, fantasy, and general oddness that doesn’t fit neatly into any one genre. Its denizens live lives of sweaty desperation, working at the Factory and listening to jazz at pill bars. The nun-like Sisters of the Sun stare at the sky with empty sockets awaiting the day the smog clears. The enigmatic crime lord Felix owns the casinos and controls most of the city, and crooked Troopers enforce what passes for the law. Above all else, the compelling mysteries of the City are what kept me reading.

On a related note, while I found a lot to like about this book, my biggest issue with it was the way it presented fascinating questions but left many of them unanswered. The City is full of cool oddities–giant talking bird gangsters, strange cults of eyeless nuns, a smattering of incorporeal fantasy races against a backdrop of industrial technology, and so on. This, in turn, makes one wonder where/when exactly the place is. Is it an invented world, a parallel universe, our own world after an apocalypse? I loved how utterly weird the setting was, but without answers to many of these questions, I felt like I was left waiting for an aha! moment or a big twist that never came. Readers who don’t mind some level of ambiguity likely wouldn’t be bothered by this as much as I was.

That said, there’s a lot here for grimdark readers to enjoy. The protagonist is a likable scoundrel, and Richardson’s prose is delightfully grimy. Thorneycroft’s yearning for freedom in an oppressive, industrialized world is something most readers will be able to empathize with at some level, and the narrative tension and pacing of his attempted escape make for a real page turner. All in all, this was a fun little Ambrosia trip of a book, and it’s well suited to readers interested in taking a walk on the stranger side of noir and dystopia.

Read The Sun Casts No Shadow by Mark Richardson