REVIEW: The Thief Who Pulled on Trouble’s Braids by Michael McClung 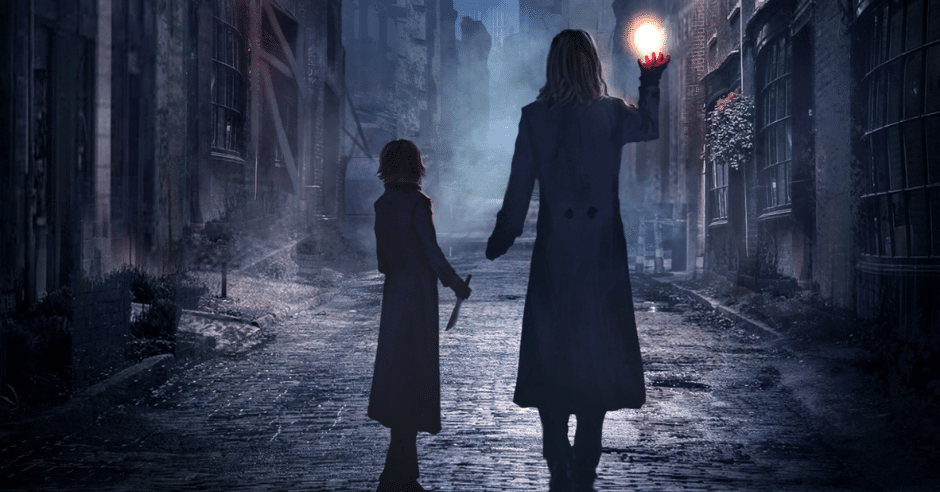 The Thief Who Pulled on Trouble’s Braids is the first novel of the Amra Thetys series by Michael McClung and the first winner of the Self Published Fantasy Blog-Off. If you are unfamiliar with the Self Published Fantasy Blog off or SPFBO, it is a competition held by fantasy author Mark Lawrence that pits 300 self-published fantasy books against each other in a grand battle with only one book surviving. The winner gets the title of SPFBO winner for that year. Not a small feat.

“Sometimes theft can be as simple and direct as a fist in an unsuspecting face, and sometimes it can be as complex as a military operation.” 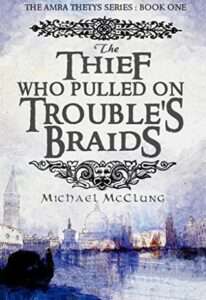 The story in a The Thief Who Pulled on Troubles Braids starts in the apartment of the thief, Amra Thetys. Her friend and sometime business partner Corbin Harbin comes a-knocking with a stolen artifact in hand. Of course, Amra is no fool. She doesn’t want anything to do with this nonsense; if he has a stolen artifact, he needs to hide it himself. He persuades her, and she agrees to watch the artifact overnight if he returns in the morning to collect it.

The next morning Corbin does not show, and she finds Corbin’s body lying in the street dead.

This death puts Amra in the middle of a battle on the cosmic scale. In the beginning, this was just a quest to find out who killed her friend Corbin, but it turns into a story of deceit, magic, power, pain, and gods. Amra will be tested both physically and mentally. She will have to come to grips with her past choices and possible future while trusting help from unexpected places. Man, I just loved Amra.

“I’d always assumed hair was an integral part of any hairstyle.”

The remarkable thing about this The Thief Who Pulled on Trouble’s Braids is that it is so short. You wouldn’t think with the emotion conveyed or the in-depth characters that this was a short book at all—quite the contrary. But The Thief Who Pulled on Trouble’s Braids does everything very well. When a writer has a clear picture in their minds and can convey that to the reader, the book does not need to be long.

To start with, Amra seems like a pretty common type of protagonist. When I was reading her, it reminded me of Sancia from Foundryside. Both are thieves who are wily, remarkable, quick-witted, prone to disaster, and caught up in something much bigger than themselves. That is where the similarities end. There is tenderness and vulnerability in Amra that is not as apparent in Sancia. But, coupled with that vulnerability is a core of steel. Amra is a capable person. Her command of herself, the dignity that she lives her life with, demands respect from every person she meets. She lays herself bare; there isn’t a lot of guile with her. Which is odd considering she is a thief. She is what she is, and that attracted me to her as a character.

“Fate is a slaver, bloodwitch, and I refuse its chains.” As I walked out her door, she spoke in a quiet voice. “That is why fate has singled you out, Amra Thetys.”

As for the side characters in the story, the most entertaining is Holgren. McClung could have played it straight with Holgren being presented as a typical wizard/magician archetype. But he didn’t at all. Holgren is vastly powerful, but you don’t get that sense from him. He isn’t throwing his weight around, and he doesn’t need to. He holds his power in check until he is pushed to far, and when he lets it out, it is a thing to behold. I went back and read the chapters that talked about Holgren battling. He is a certified badass. Aside from the power, he also makes an excellent bantering foil to Amra. They both are exceedingly quick-witted, and that leads to some entertaining conversations between the two of them.

As this is a bit of a caper story, a whodunnit, you won’t know who the big baddies are until you get near to the denouement near the end of the story. I wasn’t prepared for the twists. The pacing is so good that it smacks you in the face. There is no slow burn here.

The city of Lucernis makes me think of cobblestone streets and Italian villas but beneath the beautiful exteriors lay a lot of rot. Along with the villas are apartments that are falling apart full of people barely making it. There was a societal division between the haves and have not in this story. The city’s poverty level is mentioned briefly here and there, but it was never one of the major players. But it created a background full of information that gave some context to people’s actions. There is also a great religious backstory that McClung created that paired with the city. The religious system consisted of various deities, gods and goddesses and their acolytes running various temples around town.

When I first heard about SPFBO last year and ended up on one of the teams, I wasn’t as familiar with the past year’s winners as I should have been. Since then, I have read 3 of the 5 winning novels, and they have been highlights of my year. This book, as the first winner, is no different. Damn, is this a well-done story. Although I feel like I am late to the game and the church of Amra, there are many books in the series to look forward to.

“I feel obligated to tell you that adventures are, on a whole, stunningly bad ideas, best avoided at all costs.”

The Thief Who Pulled on Trouble’s Braids by Michael McClung is a beautiful piece of dark fantasy. It has a rich story, a morally gray protagonist, and scenes that will make you jump up and down and cheer. If you like exciting books, this is for you.