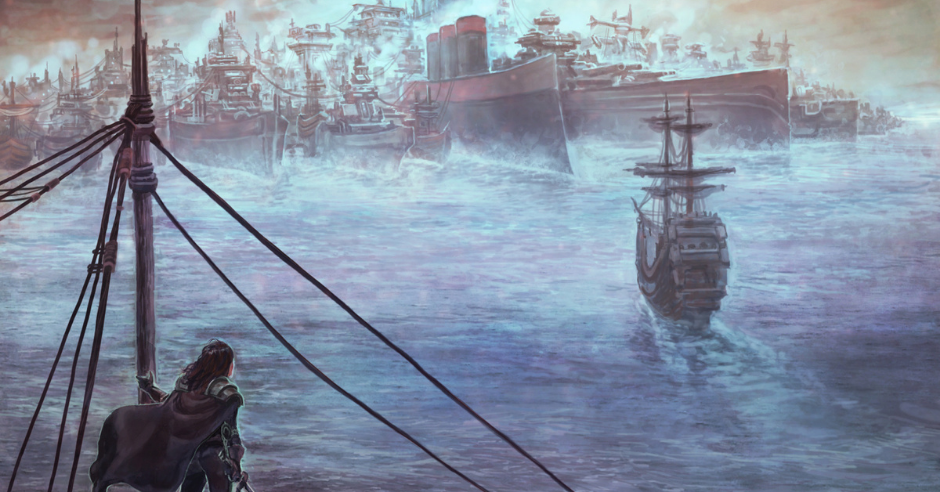 In Jed Herne’s The Thunder Heist, humanity has abandoned monster-infested land and taken to the Twisted Seas in colossal city-ships. Among these tangled masses of lashed-together boats, one stands out: Zorith, the only floating metropolis fueled entirely by lightning. Enter Kef Cutmark, a pirate, thief, and slayer of beasts with a troubled past. When Kef gets a shot at the heist of a lifetime, the prize is no less than the device that powers Zorith. The only things standing in her way are an impenetrable tower, a small legion of mutant guards, a jailer with a deep grudge, and her own dark history with Zorith. 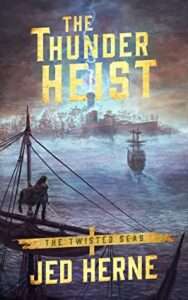 The Thunder Heist is a tightly plotted, fast-paced heist story with a primary third-person POV of Kef herself. As a reader who loves elaborate burglaries in any genre, I can say that Herne has written a really enjoyable rogue’s tale. The job itself is threaded through with complications, clever twists, setbacks, and emotional stakes, and the author manages to pack a lot of backstory, plot, and worldbuilding into a slightly shorter work with an impressive economy of words.

In a lot of ways, I’d consider Kef to be an ideal grimdark protagonist. While she possesses a sardonic, roguish charm that makes her easy to root for, she also has an ice-cold pragmatism and ruthlessness. One of my common complaints about too many antiheros is that, beneath the black and brooding veneer, they lack any meaningful flaws or truly complex morality. Kef is the real deal. People who betray her don’t get a second chance–just a knife in the throat. She’s a competent, believably written crook and the kind of character who can persuade readers that her ends truly do justify her sometimes-questionable means. The Thunder Heist’s antagonist is painted in equally skillful shades of grey, and a few chapters from his perspective add a lot to the narrative as a whole.

When it com: to worldbuilding, I found the Twisted Seas to be a top-notch setting. Rife with alchemic pollution and political turmoil and populated by humans, a second citizenry of indentured mutants, and the Honourborns living richly off the suffering of both races, the seedy city-ship of Zorith is a great backdrop for nautical crime. Herne’s setting features some wild and creative concepts and implications of a completely seaborne humanity (a long, snake-like city-ship that ensnares and raids others, for one) and strikes a good balance of dark and gritty with fun and interesting. Tying it all together is the recurring theme and question that many characters ask themselves: In a deeply broken world, is it our job to fix things? Is it even worth bothering?

If there was one area I felt was a little bit lacking in this story, it was the crew dynamic. To me, the factor that elevates so many entries in this subgenre, from Lies of Locke Lamora to Ocean’s Eleven are the relationships, banter, and contrasting skills between their protagonists. While I did enjoy the characters in Kef’s crew and thought each was well written in their own right, their lack of screentime and direct involvement in the job left something to be desired. While I like the book’s shorter length for the most part, I feel like this is one area where a tighter word count worked against it.

All together, I’d give this book a strong 4 stars. A compelling protagonist, tight plot, and some genuinely unique nautical worldbuilding spice up the tried and true heist genre. Toss in a clever ending, and The Thunder Heist will steal a few reading hours from your afternoon before you even realize they’re gone.