REVIEW: The Tower of Fools by Andrzej Sapkowski

I received an uncorrected proof copy of The Tower of Fools in exchange for an honest review. Thank you to Andrzej Sapkowski and Gollancz.

In The Tower of Fools, we are introduced to the twenty-three-year-old nobleman Reinmar of Bielawa, also referred to as Reynevan, whilst he is having sex with another man’s wife. Unfortunately, the cuckolded husband’s brothers interrupt proceedings and pummel the young rapscallion. Our protagonist somehow manages to escape, losing his many pursuers until finally, Wolfer of Stercza declares that Reinmar is a dead man.

“I’ll catch you, kill you, destroy you. Exterminate you and your entire viperous family.” 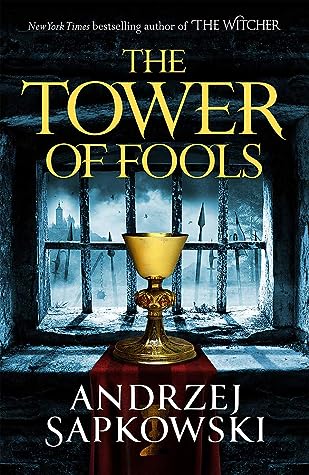 There are lots of characters introduced in the opening chapter and the general consensus is that they are all after Reynevan. Reinmar of Bielawa spends much of the novel running and hiding from many who would see him beaten, castrated, or executed. For all who seem to oppose him though, there seem to be many others who will aid him or give assistance, sometimes due of his high birth, that they are friends of a mutual acquaintance, or because he went to university in Prague with them.

Reynevan is an extremely interesting lead character. He’s good-looking, charming, intelligent, a physician, is sort of an apprentice-level mage, is often foolish, makes rash decisions, and has a major weakness when it comes to the opposite sex. Reynevan has more in common with Dandelion than with Sapkowski’s most famous protagonist, Geralt of Rivia.

“Reynevan… Misbegotten, albeit, but of Piast blood. A bishop’s son. Kin of the Nostitz family. The nephew of the scholaster at Wroclaw Collegiate Church. A friend of rich men’s sons at university. On top of that, if that weren’t enough, a conscientious physician, almost a miracle worker, capable of winning the gratitude of the powerful.”

Before I approached The Tower of Fools, one of my favourite elements of Sapkowski’s writing was that he created great supporting characters, groups, brotherhoods and fellowships. An example would be the ensemble of Geralt, Dandelion, Regis, Milva, and Cahir in Baptism of Fire. This strength of the author’s is present throughout The Tower of Fools too, with characters like Scharley, Samson Honey-Eater and Urban Horn being just as complex, colourful and interesting to read about as the novel’s lead is.

Unlike the (mostly) straight-up epic fantasy nature of The Witcher saga, The Tower of Fools would be best described as historical fantasy. It is set in the 15th-century around the time of the Hussite Wars. This is an alternative universe version of historical events that features magic, religious sects, inquisitions, demons, and many monsters of the sort that Geralt would have crossed paths with. There are witches and mages, Wallcreepers, a werewolf who rapes unsuspecting male victims, amongst other creatures lurking in this reimagined Europe. I will admit that the period when this is set is a time of history that I know very little about but I am certain that some of the characters are based upon real-life counterparts. It would be interesting to research the era and see how the characters and the events fit in with those depicted in these novels.

The Tower of Fools was originally released as Narrenturm in Polish almost 20 years ago. This release is the first time that it has been translated into English. The translator is David French who worked with Sapkowski on six of The Witcher novels, and if you enjoyed his work on those novels then, like me, I imagine you will like this translation too. The Tower of Fools has a similar flow, feel, and lexical choices to those books and a couple of the issues that I found with them too. The Tower of Fools must mention the names of hundreds of Knights, members of the nobility and religious figures. It’s extremely detailed and thorough, and all the information, although useful, can be overbearing for a typical reader who just wants to read a good fantasy tale. I honestly didn’t care what twenty various Knights from different places had marked on their shields when it doesn’t seem to have any impact on the story. 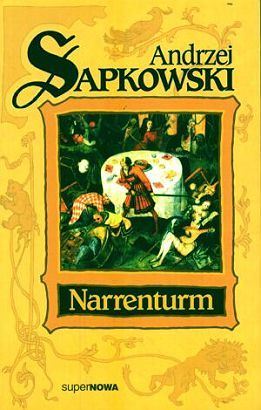 For me, The Tower of Fools came across as a slightly darker read than most of The Witcher Saga. The often naive yet good-intentioned (unless he’s got his eyes on pretty women) Reynevan has some horrendous things happen to him in this novel, including events in the titular tower. Some parts read as particularly grim and it is heightened because these moments are due to religious motives and beliefs. The novel features many fights and skirmishes, lots of bloodshed, moments of torture, violence, and gruesome deaths. The Tower of Fools isn’t without humour though. I smiled and chuckled frequently which was a nice juxtaposition to the darkness and gloom. The side characters have some extremely humourous exchanges with Reinmar, and our narrator also gives a cheeky, informal summary at what is to happen in the upcoming chapter.

The Tower of Fools is a great opening chapter of the Hussite Trilogy. It is a well-crafted mix of historical fiction and fantasy with engaging characters, a tight plot, and a unique setting. It is set in a reimagined Europe and features religion, heresy, war, magic, demons, and monsters. The ending is well-worked and fulfilling and sets up the sequel, Warriors of God, in fine fashion. I have had positive experiences with all of Sapkowki’s books so far, except for Lady of the Lake, and for me, The Tower of Fools sits alongside Baptism of Fire and The Tower of the Swallow as some of the author’s finest work. I’m intrigued to see what happens next with the Hussite Wars in this series and to find out the part that Reinmar of Bielawa and his companions may play. Recommended for fans of Sapkowski’s The Witcher Saga, and those who enjoy a dark fantasy take on historical events.

*Quotations are taken from an uncorrected proof copy of The Tower of Fools and could change in the final release.

Read The Tower of Fools by Andrzej Sapkowski