I received an uncorrected proof copy of The Trouble with Peace in exchange for an honest review. I would like to thank both Joe Abercrombie and Gollancz. 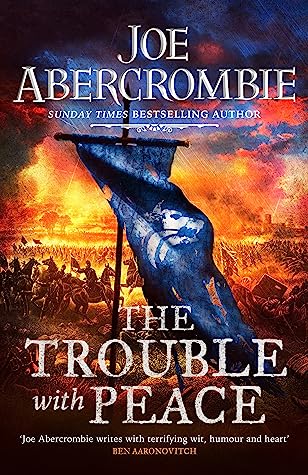 Following on from the dramatic events that concluded A Little Hatred, we return to the First Law world whilst it is enjoying a period of relative peace. Although Abercrombie is the master of defying our expectations and misleading the reader, even for him, everything remaining peaceful for a whole book would have been a step too far. Orso with his newfound power and responsibilities has to now deal with the Union’s politics and becomes aware that not all is rosy on his advising councils. The Breakers and Burners are still rubbing their wounds but their need for change and revolution is still a flame that has not been extinguished. Also, with characters such as the Young Lion, the Great Wolf, Gunnar Broad, Vick dan Teufel, Clover, Savine dan Glokta, and Caul Shivers frequenting the pages the drama was inevitable.

There are so many standout moments throughout The Trouble with Peace that it is incredible that Abercrombie was able to fit them all within a 500-page book. The only negative thing about receiving an early copy of this novel is that I can’t discuss these scenes with anyone yet, and I’m not mean-spirited enough to spoil these awesome events. Calling them spectacular is not an over-exaggeration. Furthermore, when I believed that it couldn’t get any better, the last three chapters deliver. Abercrombie really knows how to end a novel. In The Trouble with Peace, he absolutely nails it.

For me, Abercrombie’s greatest gift to his readers is his characters. We follow the same point of views as A Little Hatred. All flawed, all likeable, often frustratingly so as many shouldn’t be at all. My favourite perspective to follow was that of Orso. Throughout The Trouble with Peace, he is really developing into something special. Rikke’s sections deserve a special mention too, especially the dreamlike Long Eye segments when they occur. If I force myself to be overtly critical then I would say my least favourite viewpoint was that of Vick’s. Truthfully though, that isn’t really a negative in a company so fine as her perspective presents some great moments too, including one with an assassin. In addition to the 7-or so points of view, which sometimes change mid-chapter, certain extremely important events are presented through the eyes of many different side characters or very minor players to give a fully 360-degree immersive experience of these happenings. It’s deftly done.

The author writes war and battle scenes unlike anyone else I’ve read. They are marvellous, intense, sometimes tragic, and extremely gritty. Often injected with completely unheroic actions, hopelessness, and humour, too. The Trouble with Peace has many humorous scenes in general but to find something that happens amusing when it’s shadowed by chaos and death definitely plays with the emotions. I even chuckled when reading the kindly included Dramatis Personae. An example is as follows:

Downside – one of Clover’s warriors, with a bad habit of killing men on his own side.

The cover of my copy of The Trouble with Peace features the words conspiracy, betrayal, and rebellion and this is a great summary of what the book is about. The story completely exceeded my high expectations and I enjoyed it even more than A Little Hatred. It features stunning dialogue and wit and has memorable characters who leap off the page to attack your emotions. It’s a story that I know will stay with me for a long time. To conclude, I’ll simply say that The Trouble with Peace is a masterwork of grimdark fantasy by an author who is one of the finest the genre has to offer.

Read The Trouble With Peace