The True Bastards from author Jonathan French continues the tale started in his wonderful The Grey Bastards novel that began as a self-published title before strong word of mouth and reviews led to Orbit releasing it and taking on the rest of The Lot Lands series. Fans of The Grey Bastards will be glad to know that though the story’s reins have passed from Jackal to the half-orc Fetch, The True Bastards is still the filthy bastard child of Sons of Anarchy and The Lord of the Rings that we all fell in love with. 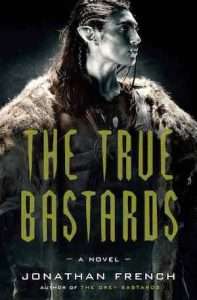 The True Bastards begins almost two years after Fetch reluctantly took over the Bastards. The responsibility of leading the half-orc clan is a heavy burden to bear at the best of times and life in the Lot Lands is getting worse. Still struggling to find her way without her two best friends and forced to lead at a time when food is scarce and a strange illness weakens Fetch, a reminder of the battle at the end of the first book, the clan leader discovers new threats to her home and is tasked with finding a way to survive. Fetch is an interesting character to follow this time around. Headstrong and eager to fight her way out of most situations, we are able to follow her on the path of a leader as she realises that she isn’t just looking after herself now; she has a whole group of people looking to her for their own survival. With the Kiln destroyed following the orc incursion, Fetch must rebuild and figure out the best way forwards, but the Lot Lands is an unforgiving place that doesn’t offer much time for such a transition. The world moves on and waits for no one.

The writing feels tighter in The True Bastards and French slips back into the world with ease. The camaraderie between the characters flows with ease and it is the interactions between Fetch and the people of the Lot Lands where French’s writing truly shines. The playful jokes and banter between The Bastards and others in the world feel genuine and earned, informing the reader that these are characters who have lived and survived alongside one another for some time. In a story full of foul-mouthed half-orcs battling to survive, French effortlessly draws the reader to the bonds between the characters and it gives The True Bastards its beating heart.

Though more of a dark fantasy novel, The True Bastards displays more than enough threads of grimdark in its tapestry. Characters like Fetch, Hoodwink, and others would be right at home in Joe Abercrombie’s The First Law world (aside from the fact that they are half-orcs!). I’d pay good money for a meeting between Hoodwink and Caul Shivers or Fetch and Ferro Maljinn. The scorched terrain of the Lot Lands is grim, filthy and French builds the world with more clarity this time, showing the reader how what it is like to live in a world populated by orcs, halflings, centaurs, elves and men. This is no Middle-Earth – but that is a compliment to the way in which French uses these familiar races and gives us a fresh take.

The True Bastards is a cracking sequel that builds on what was great about the first book and offers a dark and tense story that will make you want to keep on reading. If you enjoyed The Grey Bastards, then you will love The True Bastards. Full of dark humour in a gritty world, pick up a copy in time for The Free Bastards, due out in September 2021. Four Stars.