It’s just past spooky season and there’s no better time for an anthology of The Year’s Best Dark Fantasy and Horror.

Paula Guran has been editing The Year’s Best Dark Fantasy and Horror anthologies annually since 2010, alongside a host of other collections of the chimerical, cosmic and creepy. This year she has assembled an all star cast of authors producing a wide variety of unsettling and thought provoking tales to fill your autumn nights with dread and wonder. 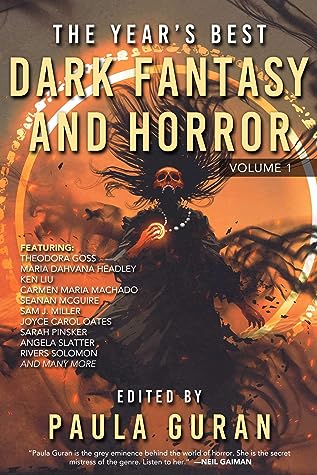 The author list for The Year’s Best Dark Fantasy and Horror reads like an awards ballot but with twenty five stories to draw from it’s impossible to break them all down in a review that doesn’t constitute a piece of short fiction itself, so I’ll just pick out a few that really tickled me personally.

Pat Cadigan’s “About The O’Dells” weaves domestic violence, a teenager watching their parents divorce and a haunting into a tale that’s both distressingly visceral and subtly affecting. It’s a classic coming of age ghost story, with more blood and more emphasis on helplessness than vengeance or overcoming anything.

“Conversations with the Sea Witch” by Theodora Goss is a deft and bittersweet extension of the story of the Little Mermaid which takes a familiar tale into that space beyond ‘happy ever after’ to the more nuanced land beyond.

It’s always nice to see places you’re familiar with reflected in stories and Daniel Carpenter pens a dark love letter to Manchester in the shape of “Hunting By The River.” This is melancholic urban fantasy fuelled by dissolving families and gentrification and it really speaks to me.

The Year’s Best Dark Fantasy and Horror closes with the incendiary “Read After Burning” by Maria Dahvana Headley. This is a tale of the apocalypse and what comes after, when the powerful try to quash knowledge and a spirited few keep it alive in their very bodies. It’s arguably the grimmest piece of hopepunk I’ve read in a long time.

Dark fantasy of all kinds excels when it makes us feel something about our own lives through a speculative lens, darkened with blood or smoke. Whether that is the sharing of grief, the catharsis of anger or the kindling of hope it’s that connection that matters.

Fittingly, the dedication for The Year’s Best Dark Fantasy and Horror reads “To all the Essential Workers. Heroes seldom wear capes and rarely have supernatural powers.” In this year of 2020 is the most fitting and simultaneously touching yet grimdark sentiment imaginable.

For fans of dark fantasy whether it comes from a folklore, contemporary or science fiction source, The Year’s Best Dark Fantasy and Horror is a must read.