REVIEW: There Is No Antimemetics Division 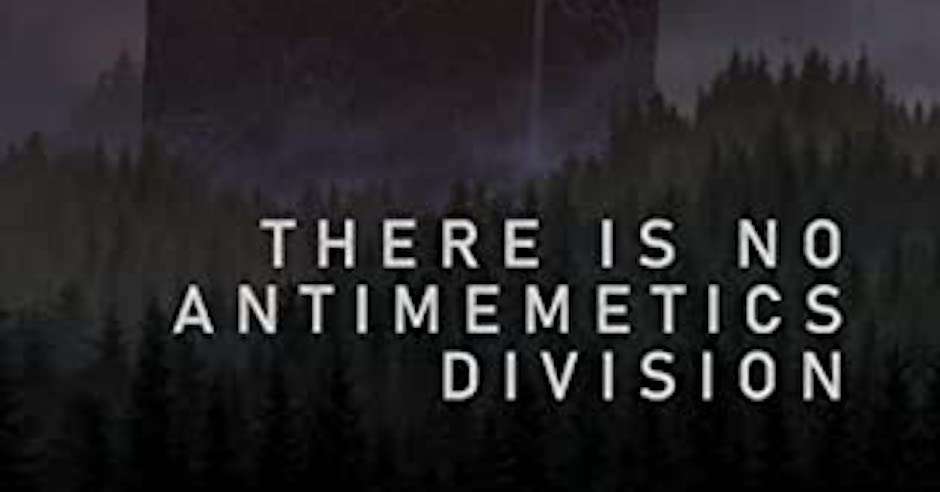 The SCP Foundation is a collaborative setting that anyone can add to. It stands for Secure, Contain, and Protect, and deals with a specialized bureaucracy dealing with things that don’t make sense in our reality: monsters, artifacts, modern objects that have been warped or turned paranormal in some way. 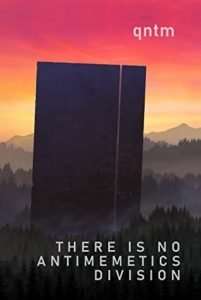 Most of the SCP stories take the form of in-world documents, listing the object or creature by designation, and then explaining what it does and what sort of precautions work to keep people safe from it. This sort of detached, scientific analysis of horrific, reality-altering creatures and objects works fantastically to create a specific tone, a mix of dark humour and cosmic horror.

The SCP stories started in 2008 and have continued since. There are over 6,000 SCP classification stories, and thousands more ‘Foundation tales’ that are written in a more typical short story style. They’ve made their own video games, and clearly inspired Remedy’s 2019 game Control. While I’ve only read these occasionally, my favorite of them is a recording of a basketball game in which the people who were recorded gain more self-awareness the more times the recording is replayed. (It’s available here: https://scp-wiki.wikidot.com/scp-1733 )

All of that brings us to qntm (real name Sam Hughes)’s SCP book There Is No Antimemetics Division.

This story employs a mix of the SCP classification and the more traditional style of Foundation Tales. I appreciate qntm’s desire to write a story that swings for the fences in its very premise. I’m not even sure whether I should call it a novel or a short story collection as many chapters felt like distinct entities but worked together to create a whole.

The opening section of There Is No Antimemetics Division was excellent. It consistently hit the place I love in science fiction and fantasy, where reality almost but doesn’t quite make sense. That frisson between the real and the unreal is my favorite thing about speculative fiction.

There is No Antimemetics Division follows Marion Wheeler, the head of the Antimemetics Division. No one else in Site 41 remembers her, or the rest of her division, because that’s how antimemetics work—they ruin people’s memories. With enough capability, they can make it so no one else remembers them. The title is a direct quote from Marion Wheeler’s boss at Site 41, who forgot she existed—as well as her entire department.

There was a section near the beginning where one of the staff who worked under Wheeler was lost to these antimimetic creatures, to the point that everyone else’s eyes would simply pass right over him as if he didn’t exist. Worse, by stealing his memories they essentially ate any plan he could come up with. It was eerie by itself, but then he found a list, written by other people this had happened to, of what they had tried to do to stop these things, and how every one of the attempts had failed.

The most common countermeasures to the antimemetics are mnestics—drugs that enhance memory and counteract antimemetics, and amnestics—drugs that do the opposite, and make people forget. Wheeler also uses trivia to distract them. They also have plans for developing countermemes but it will take years, and if the entities eat any memories associated with the plan in the interim, they’ll know all about it.

The characters in this book are quick sketches rather than fleshed out and fully realized, but I don’t find that a problem. This book knew what it wanted to be, and deep characterization wasn’t part of that. It has big ideas it wants to examine instead. A few of the slower chapters entail the marriage of Marion Wheeler and her husband Adam, a violinist, and I will admit I enjoyed those. But they weren’t the selling point of this novel.

There Is No Antimemetics Division hit one particular wall that kept it from being a five-star book. The last act became too big, too fast. The opening sections had tense paranoia, but the ending felt rushed and the stakes ceased being personal.

That said, I’d rather a flawed book that does something new than a book that plays it safe. The idea of entities that can not just eat your memories, but by doing so, make people forget they knew you, hits both my enjoyment of cosmic horror and stories that play with memory. There Is No Antimemetics Division managed a paranoid unreality that I truly loved.

Read There Is No Antimemetics Division