Clayton Snyder’s manic concoction of whimsical satire continues in his second installment of the Thieves’ Lyric series. Thieves’ War brings Cord and Nenn back together for their greatest heist yet. A heist that, if successful, could destroy the foundation of what it means to be human. 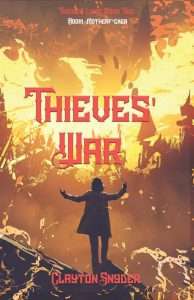 After their involvement in a slew of deaths and destruction of an entire city, Nenn and her group of ragtags find themselves once again broke. Their rotten luck continues as they find themselves in Gentia, a land in the midst of war and great social disparity. A  foul place where Harrowers walk freely. Unsurprisingly, Nenn’s accomplice Cord further complicates thievery by hatching a plan to not only earn money but also bring an end to all wars.

Somehow always finding a way to say something both crude and philosophical, Cord is a larger than life character. As a thief, Cord aims for more than stealing riches for himself. His schemes involves enriching the lives of those shunned by society. There is a sincere depth to his character that balances his constant cheeky banter. While I usually find righteous characters disagreeable, I am particularly fond of Cord.

Thankfully, Cord’s eccentric character does not overshadow Nenn. As Nenn is the main point of view character throughout the series, I am thrilled we learn more about her history and truly see her develop in this book. The revelations in her character arc floored me. While the plot in Thieves’ War is grand, my favorite moments were the lore and discovering Nenn’s past.

Between scenes of utter chaos and tomfoolery, Cord and Nenn quietly reveal the stark truths of their world. Their truth transcends the fantastical worldbuilding Clayton Snyder created and becomes a message that mirrors real life. I rallied behind Cord’s ambitions. I truly felt Nenn’s grief. Snyder intensifies all the best qualities from River of Thieves in his second installment. Thieves’ War is more offbeat, wild, and more wholehearted.

Thieves’ War is just as graphic as the first book. While Thieves’ War is comical Clayton Snyder certainly does not shy away from portraying violence with detail. Snyder was a finalist from the most recent SPFBO 7 contest. His cowritten novel with Michael R Fletcher Norylska Groans did receive some polarizing reviews due to its unapologetically grimdark elements.

I thoroughly enjoyed Thieves’ War. Clayton Snyder’s ability to graft such oppositional elements of satire, wholesome themes, and extreme violence together is talent. Thieves’ War is a brilliant absurdity.