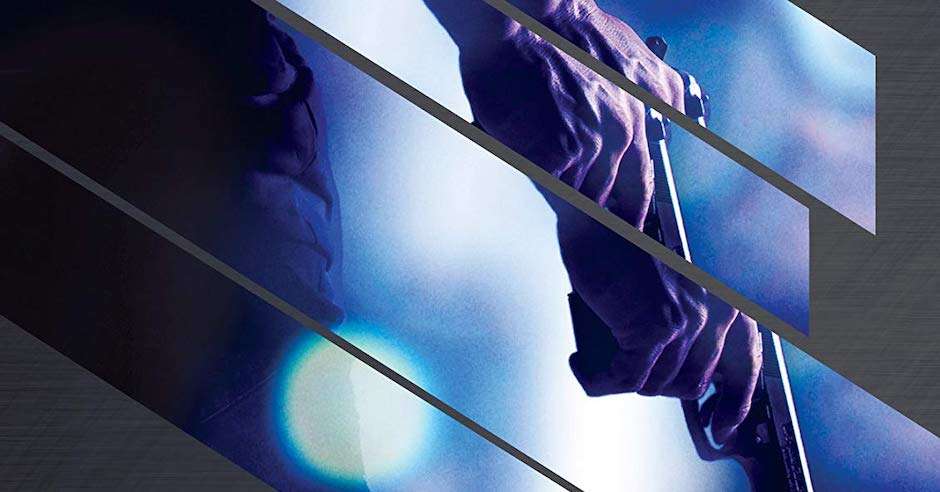 Richard K. Morgan is best known in the grimdark community for his seminal SF work Altered Carbon, a genre-defying blend of noir detective fiction and high-concept SF. While Altered Carbon featured space opera elements such as technology that could digitally fling minds across the stars and into new bodies via needlecast technology, Thin Air explores a future much closer to our present day. Corporate malfeasance and greed, the standard staples of Morgan’s SF, are still, however, abundantly present. 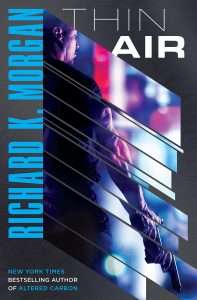 Take, for example, the protagonist, Hakan Veil. He literally embodies ruthless capitalism. Genetically engineered in the womb, he was born into servitude as an enforcer for the corporate security firm Blond Vasiutus. The upside, such as it is, is that he has a military AI hardwired into his nervous system, along with a DNA-deep affinity for violence; the downside is he was created to hibernate on long-haul space flights as a watchman of last resort and even retired he still needs to hibernate according to his genetic protocols. The tongue-in-cheek saying, “Don’t wake the overrider”, becomes quite the refrain throughout the novel. Unfortunately for Veil, now landlocked on Mars rather than shunted between long-haul space flights or living the good life on Earth, hibernation requires a special “Dyson” capsule. And for this he needs cash.

The one commodity Veil has in abundance is his ex-overrider talent for violence, and putting that on the market has inevitably put him on the payroll of Mars’ criminal element. Hence the novel kicking off with Veil assassinating a strip club kingpin on the behest of organised crime out of the crime-riddled reaches of Hellas Crater, a job which lands him almost immediately in the Bradbury PD lock-up. Fortunately Veil is offered a reprieve from his charges by homicide detective Nikki Chakana. It seems the disappearance of a recent lottery winner has instigated an Earth Oversight auditing team investigation, stirring up the locals and destabilising the ruling government. In exchange for his release, Chakana, who has her own history with Veil, wants him to baby sit newly arrived auditor Madison Madekwe.

What follows is a glamour-and-grime tour across the best and worst of the new Mars. In his search for answers to the lottery winner’s disappearance, Veil visits the luxury resort where Madekwe has been sequestered, plumbs the criminal depths of Hellas Crater, wends his way up to the wilds of the Shelf counties, and makes several pit stops at locales far and wide where he invariably shoots, maims or beds someone.

All the while, the Earth Oversight audit continues stirring up the masses and civil unrest smoulders. The locals are nervous about the prospect of Earth intruding into their affairs. Everyone still remembers how the Okombi coup and the invoking of Article 27 turned out, with the Navy in the streets, brutalising the populace.

The politics and history evident in Morgan’s world-building are a big part of what makes his novels so fascinating and cohesive. He certainly has a flair for imagining those aspects of the future. Thin Air showcases a plethora of vying political and corporate interests – the Sacranites, the Frockers, the familias andinas, Earth Oversight, Governor Mullholland, etc. – as well as a timeline of historic events that still reverberate in Veil’s present. None of it is superfluous, either. Eventually, the factions and the history become indispensable in powering the narrative.

While the tech in this novel is oft-peddled SF fare – or variations thereof – It nonetheless feels edgy because of Morgan’s knack for infusing it with slang and integrating it into the lives of the hard-bitten characters. When it comes to slang and tech, Thin Air throws you into the deep end right away. There are no lengthy infodumps – the protagonist, Hakan Veil, just hurls out the nomenclature like a hardened local, and you just have to go with it and try to translate as best you can. ‘Brangels, code flies, soaks…the list goes on. Initially, it feels a little disorientating, but after I warmed to the frenetic pace of it, and I started to find the slang second-nature. The way the tech integrates into daily life is also seamlessly done and soon becomes invisible.

Take the smart lenses everyone wears. Crims and cops alike are constantly running algorithms – “gestalt” programs — to read emotional and body language cues. Every interaction while wearing lenses has this tech element playing into it. For example, do you trust someone enough to remove your lenses and take them at face value? These nuances lend the world a tactile grittiness you can almost taste.

This grittiness permeates all aspects of the corrupt, insular world that is Thin Air’s Mars. It is amplified by the main habitable areas being sealed beneath an atmospheric layer called the Lamina, a piece of world-building that gives many of the locales a claustrophobic, noir feel.

In terms of genre, Thin Air seems to fit somewhere between a detective novel and a thriller. Veil spends a lot of time chasing leads and dames in the solo, lone-gunman style of the noir detective, but he also spends a lot of time embroiled in gunfights and simply shooting and punching his way out of trouble in a race against ticking clocks.

Either way, I loved this novel. Edgy SF novels that don’t overp