In Those Above by Daniel Polansky a perfect world for the near immortal god-like creatures and their human slaves sits atop piles of ever increasing human misery below where rebellion flares. In the surrounding countries one of the few men to ever kill one of Those Above in single combat during humankind’s last failed uprising marches to a war created by one of the most fearsome women alive. In book one of The Empty Throne duology–chock full of the vicious, the brutal, the naive, and the furious–Polansky’s abilities are in fifth gear. 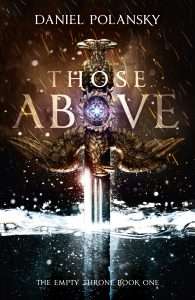 In Those Above, Bas God-Killer, a Legatus at the head of 20,000 men, grinds his fellow man into the dirt for his country, but his red path leads him ever toward the Roost, the fortress city where Those Above rule over humankind. Eudokia, First Lady off the Commonwealth, uses her power and influence to lead a nation generally held back by those with title. Calla, a seneschal to Those Above, serves one of the High, and witnesses the wonders of the first rung of the roost, only to discover the horror of existence Those Above built her paradise upon, below. Thistle is an impoverished young miscreant from the fifth rung of the Roost. When a smash and grab goes terribly wrong, a stranger offers him a chance at something greater.

Those Above has been on my radar ever since I finished The Builders. Polansky’s delivery can be beautiful, brutal, and darkly funny all at the same time, and it’s on full show in this book. His use of perspective brings worlds to life in a way few authors can, genuinely, with each character a voice you can pick up almost immediately, even without the context of a name.

The themes of poverty, of power and its misuse, of corruption and manipulation, and of treating people like they aren’t human while those who benefit turn a blind eye really rang out for me. The Roost itself seemed like a blunt metaphor for trickle down economics, with those on the first rung either naively, or purposefully blindly, assuming everyone below had acceptably good lives because of the splendour of the First Rung.

The four main characters were absolutely brilliant and I loved pretty much every moment seeing this world which mixes feelings of the Roman military and the Germanic tribes they fought against, and Mount Olympus and its gods come to life. Bas delivered the old-school military barbarian trope really nicely, with the mixed in Roman Legatus approach adding a nice angle. Calla and Thistle were enjoyable because of their naiveté and how Polansky pulls the wool from over their very, very different perspectives on the Roost. But we definitely have to talk about Eudokia. Eudokia, by far, was the best character to read. She is utterly vicious and calculating, and I loved every word of her chapters. And a tip of the glass has to go to narrator Andrew Wincott; his delivery of her lines is as fierce as the woman he narrates.

Those Above is an absolutely excellent read and I cannot wait to get into Those Below. While the world feels like it deserves more than a duology, I am so excited to be able to read a continent-spanning story in the space of two books. Those Above is a sprawling, brutal, imaginative read, with characters and themes that hit home with the freakish power of the superhuman masters of humankind.

Read Those above by Daniel Polansky