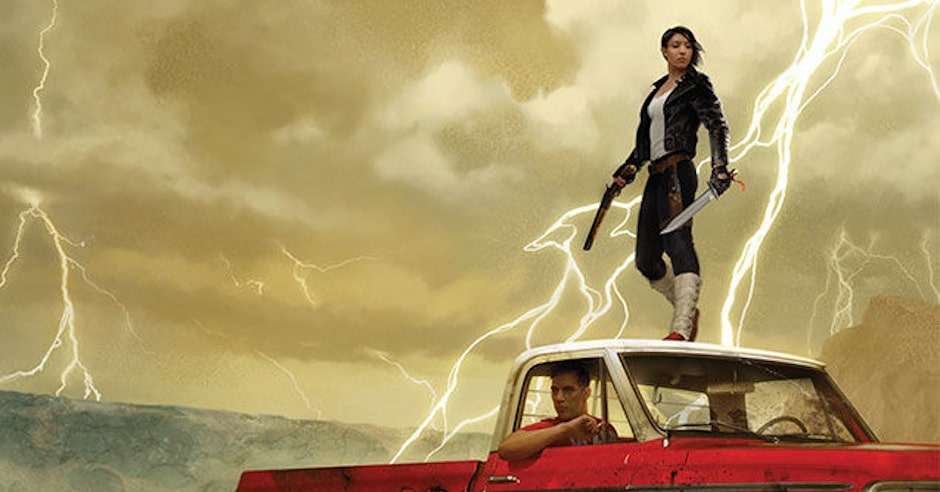 Trail of Lightning by Rebecca Roanhorse follows protagonist Maggie Hoskie as she lives and battles in the “sixth world.” The Sixth World is the age that has come after climate change and the big floods that have taken most of the land. Maggie, or Mags, as she is called, is a survivor. “Maggie Hoskie is a Dinétah monster hunter, a supernaturally gifted killer. When a small town needs help finding a missing girl, Maggie is their last—and best—hope. But what Maggie uncovers about the monster is much larger and more terrifying than anything she could imagine.” She was the victim of great violence as a teenager, thus shuttling her on a path of fighting monsters.

Because of the flooding, referred to as “big water” several changes have occurred on the lands. Large walls have enveloped the southwest. These walls, 50 feet tall, were magically created to protect the Navajo Nation of Dinétah. They keep the floods and the people at bay. Also, some individuals have “clan powers” or powers that represent the clan they are from. In Mag’s case, it is the power of fighting, and she has the skills of the warrior inside her. This allows her to eke out a small existence as a bounty hunter and monster killer in exchange for small amounts of tradeable goods or money.

“We were safe. Safe from the outside world, at least. But sometimes the worst monsters are the ones within.”

Like many other main protagonists with incredible gifts, Mags is wracked by guilt. She has a difficult time defining what she is. Is she a monster, or is she a person who has done awful things to survive. This is the underlining theme of the story. Are we defined by what we do, or can we rise above our pasts? The story is made even more enjoyable by some well written supporting characters. Firstly, Grandpa Tah. He is an old medicine man that has helped and saved Mags in the past when no one else would. He sees her as an adopted daughter and treats her like family. Then there is Tah’s grandson, Kai. Kai starts as a charismatic character, but further develops and changes as we learn more about him and his motivations.

I loved this book hard, from start to finish. I have a soft spot for character-driven stories like this, and Roanhorse did a great job of balancing character arcs and development with action. The characters developed deep and complicated relationships with each other that allow the reader to latch on and become engrossed in the story. Additionally, the fact that it is written with rich Native American stories and culture is rare in fantasy, and I am so glad that this book exists.

“Sometimes, the ones we call our heroes are the greatest monsters of all.”

Trail of Lightning had some detractors, some small problems that I encountered that took me out of the story a few times. The pacing is good and generally even. However, when the pacing dips, it dips hard—some of the character interactions were a little confusing, especially at the end. I would have liked the relationship between Kai and Mags to progress a bit slower, especially with how reticent Mags was in trusting anyone. But that might be a personal preference.