REVIEW: Transmetropolitan, Vol. 1: Back on the Street by Warren Ellis 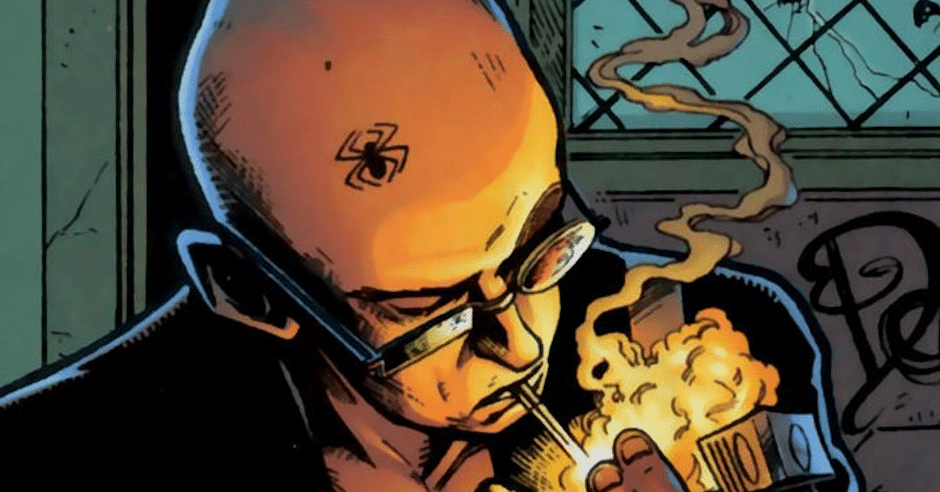 Spider Jerusalem of Transmetropolitan is the hero you did not know that you needed. Brash and deranged, Spider yells at the top of his lungs things that make you uncomfortable. And, if you are nervous? Good. Scared to examine painful truths? Good. Because the truth is coming for you, and Spider is going to be bringing it with the fervor and intensity of a bulldog on crystal meth.

“TRUTH comes easier when you’re nine years old, too. Everything’s a lot less complicated. This or that. Us or them. Truth or lie.”

Transmetropolitan was written twenty-one years ago, published by DC Comics between 1997 – 2002, but it might as well been written yesterday for how current and prescient it is. The story is built around the antics of our protagonist and antihero, an investigative journalist named Spider Jerusalem. He is tattooed, brash, brilliant, sarcastic, caustic, drug-addicted, and a wild man of journalists fervor. Often drawn wearing a pair of stereoscopic sunglasses, one red lens, and the other green while streams of smoke curl out of his nostrils and usually sporting a scowl of discontent while gesticulating wildly at the idiocy of passers-by. Describing him, he sounds like a lunatic when in actuality he is the reincarnation of gonzo journalist Hunter S. Thompson dropped into the 23rd century. 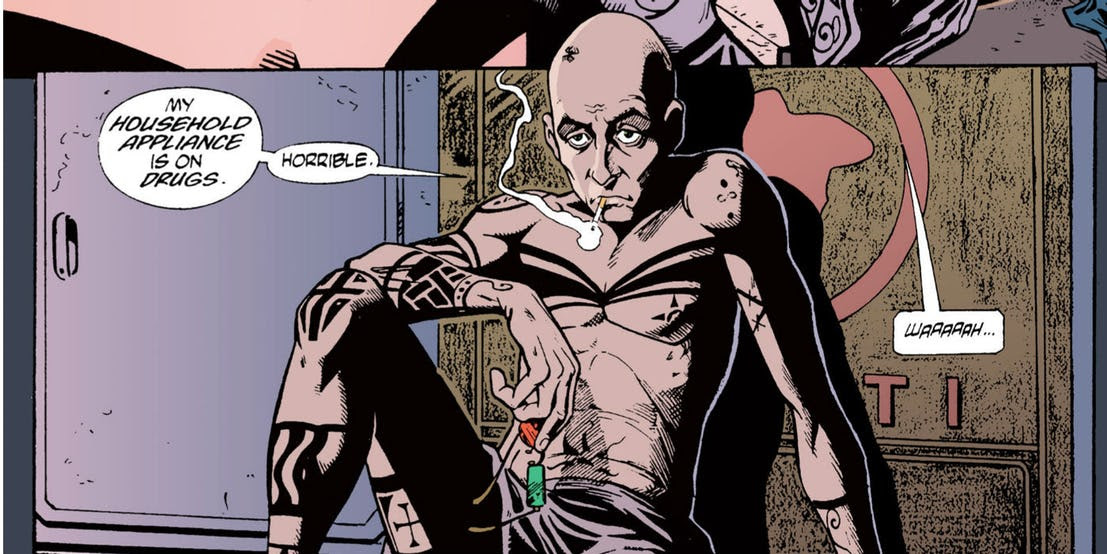 The first six issues of the 60 issue story make up Transmetropolitan Vol. 1 Back in The Streets. It is written as Spider is getting his feet under him after a five-year voluntary sabbatical. Called back to finish his book deal with his editor, lovingly known as Whorehopper, he unwillingly reenters The City and society and is equal parts horrified and fascinated by it. The City, as it is referred to, is Id and hedonism run amok puked out in a cyberpunk Technicolor fever dream. If you can dream it, and have the money, you can do it. All of which sounds impressive when tempered with wisdom and ethics. However, The City is neither of those things. Spider is constantly reminded of why he hid in the wilderness and eschewed all human contact. 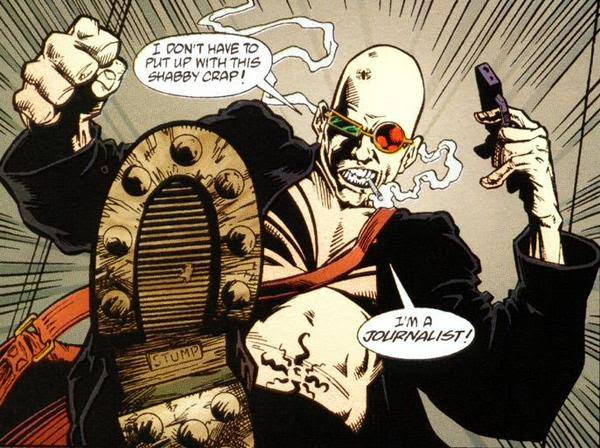 Issue three of Volume 1 talks about Spider’s first story back into the throes of journalism. He is covering a pseudo-alien messiah named Fred Christ, as he represents the Transcience movement. The Transience movement being a subculture of body modification fetishists who use technology to change themselves to something resembling a new species. In this case, adapting aspects of an alien species. Fred Christ’s base is located in the Angel 8 district of The City. After Spider burns a transient guard in the eye with a cigarette, Spider notices how tense the Transient population is. It is a powder keg ready to blow. Spider finds Fred Christ and has a brief interview with him where Spider basically eludes that Fred is puffed up with fake power and that the government is going to come down and stomp out this little movement of Freds.

“There’s one hole in every

And it’s one word long— PEOPLE.

No matter how big

the idea they all stand under,

people are small and weak

and cheap and frightened.

It’s people that kill every revolution.”

Here is where the writing shines. Eventually, the government does get with the stomping, and Spider gets right in the middle of it and live blogs. He brings the gritty moment to moment of the brutal beating of the Transient population by an uncaring police authority to the people. Eventually, this sways the audience gawking at this display via Spider’s writing and causes a public outcry shutting down the beating. Spider helped. I don’t think he intended to help but to speak the truth as he saw it; however, his truth saved some transient people. 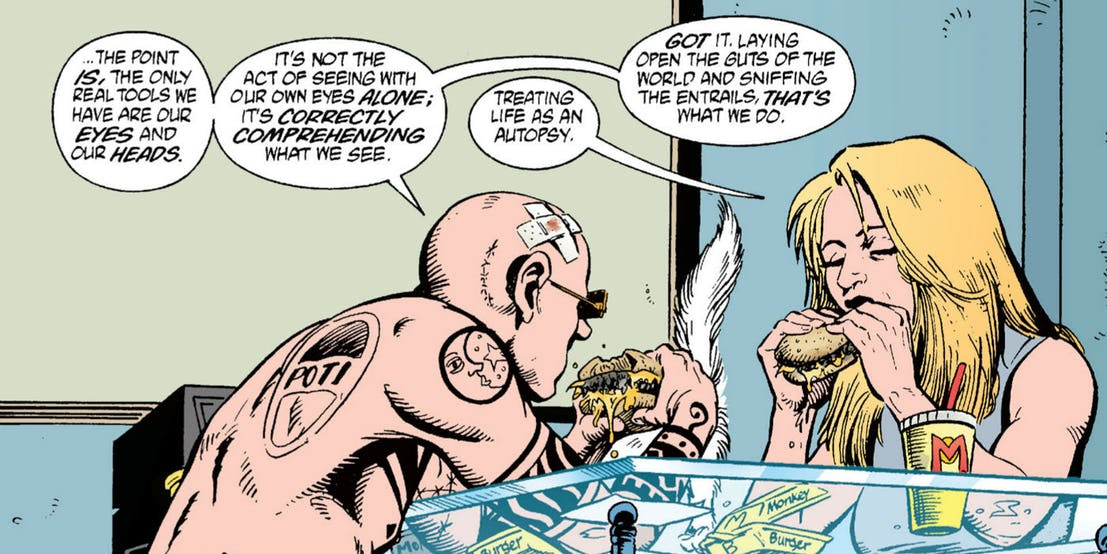 God, I love Spider Jerusalem. He is everything I wish Journalists still were. Raw, uncut assholes who search for the truth as they see it no matter what they have to go through. In the politically charged climate of now, it seems that those who speak truth to power are not the journalists as we used to know them, but bloggers and users of Twitter.

And you are just full of shit.”

The question is “Should you read this?” Should you delve into the gritty world of Spider and meet with the truth on his terms. I am of a resounding yes, there is a reason why he is a classic graphic novel series. I think the world needs Spider Jerusalem’s even if he is just ink and ideas. All Hail Spider Jerusalem!

Buy Transmetropolitan, Vol. 1: Back on the Street by Warren Ellis

Just getting in to graphic novels and comics? Check out out where to kick off this new addiction, here.