TJ Klune’s books have become a place where my heart can get a zap like a defibrillator pedal. Both Under a Whispering Door and Under the Cerulean Sea tread the line between sentimental and sweet, but Klune is such a skilled writer that I never drift to the wrong side of that line.

“I’m dead,” he said. “There’s no going back from that. A river only moves in one direction.” 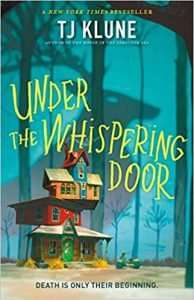 Instead, after I get done with his books, and for this review, I will be talking about the newly released Under the Whispering Door; I feel good about myself and good about the world. I hope that somewhere in the vastness of this universe, there are true stories like what you find in these books. In the infinite, anything is possible. But until I discover and am witness to real-life stories that are as sweet as these, I will have to go back and read Under the Whispering Door again and again.

Wallace whispered, “It’s easy to let yourself spiral and fall.”
“It is,” Nelson agreed. “But it’s what you do to pull yourself out of it that matters most.”

The book follows Wallace Price Esq. A big-time lawyer and partner in a law firm. He is everything a someone who does not practice law expects lawyers to act. In that vein, Wallace is an immediately identifiable character, not one you can sympathize with, but absolutely one you understand. He is cold, calculating, ruthless, and utterly devoid of the ability to empathize.

These characteristics served him well. He is smartly dressed and expects the same of those around him. He is crushingly fastidious and again expects this of others. Any infraction on this is met with cold civility and a pink check. In other words, he is hated by his employees, has no friends, and his contemporaries are either terrified of him or believe him to be a cretin.

Then he dies. Alone. This starts the actual journey.

He wakes up from death at his funeral. There was no gnashing of teeth and wailing to the Heavens. Quite the contrary. “He was a real bastard.” Everyone is ignoring him; no one can see him. He is dead, so it makes sense except for one woman. She keeps staring in his general direction. She introduces herself, her name is Mei, and she is a reaper. She has come to take Wallace onwards.

She takes him to a place, a shabby chic little tea house in the middle of the forest. A place that Wallace would never have visited in his life but is now staying at in his death. Mei introduces Wallace to Hugo, the ferryman. Hugo’s job is to help Wallace get used to the idea that he is dead before he steps through the final door. A door where Wallace hear’s whispers coming from underneath it.

The writing is lovely. Klune writes in a minimalistic style; he gets the ideas across in prose that is not overly embellished or wordy but still packs an emotional punch. “Because you’re you, and that’s who you’re supposed to be.” It is also hilarious, and there is one scene involving an ouija board that had me in tears.

Klune is so good, and his books keep having me come back for more because of the relationships he forges. There are many types of love in this life, or death as it were. There is familial love. The love of found family. The love of a dog. And the love between lovers. Klune explores them all. Because what can teach someone most about life more than love? Love spans the gamut from Blisteringly painful to joyous, and Wallace needs to learn to be a person.

Under the Whispering Door is a joyous book, a little slow at first, but things start to get rolling about midway, and I finished it all in one afternoon. It has passion, love, pain, and all the beautiful things life has to offer if you can recognize it and appreciate it. Thank you, TJ Klune, for another lovely book. I won’t be forgetting Wallace’s journey anytime soon.

Read Under the Whispering Door by T.J. Klune