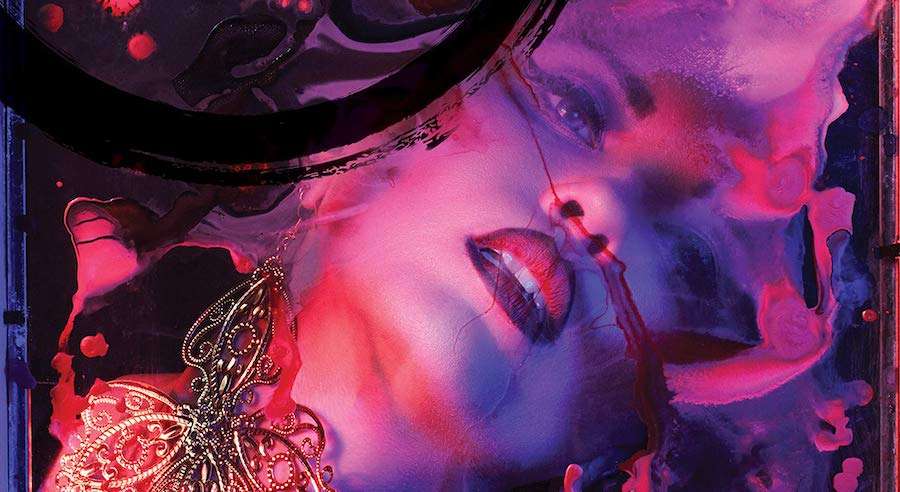 In the Nineties, I loved my weekend sessions of Vampire: The Masquerade. Before A Song of Ice and Fire, it was a fascinating world of moral ambiguity (even moral decay) where the protagonists were all monsters. This was years before Twilight and vampires still had some cachet as scary monsters. It was also years before the urban fantasy boom that may have been inspired by the World of Darkness where monsters existed in the shadows of the modern world. 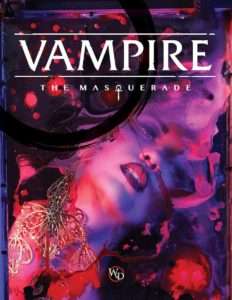 If you’re tired of his history lesson, know that eventually the 20th Anniversary of Vampire: The Masquerade resulted in a re-release of the line by Onyx Path Publishing. This helped revive the game enough that it was bought by Paradox Interactive (Eve Online) and they envisioned a new edition that would update it for the New Teens.

Vampire: The Masquerade 5th Edition has since won the 2019 Origins Awards for Best RPG and Fan Favorite. It’s also proven to be an incredibly popular with fans, though not without controversy as the game attempted to move from a previously PG-13 view of vampires to a hard Adults Only treatment of them. As the sourcebook says, “this is not a game about playing heroes.”

The premise for V5, as we’ll call it from now on, is that it is the year 2019 and the setting has been updated to Modern Nights. The world’s governments finding out about the existence of vampires, or at least their intelligence agencies have. This has resulted in what the vampires call the “Second Inquisition” that means teams of Special Forces and analysts are working around the clock for signs of the player characters breaking the Masquerade. Entire cities have been depopulated of their vampire populations, London specifically, and this has had repercussions throughout undead society.

The Camarilla, previously the most stable of setting elements, has split in half. Now it is divided between the new Camarilla (Tremere, Toreador, Malkavians, Banu Haqim [Assamites], and Nosferatu) vs. the Anarch (Brujah, Gangrel, and Ministry [Followers of Set]). The Sabbat has left their traditional territories to go on a crusade in the Middle East to destroy the ancient Antediluvians. Worse, for the Elders at least, a mysterious call beckons them to battle the Sabbat on behalf of their ancestors.

Some of these changes are on the extreme side and were rolled back in sequels to the book with the revelations not all Elders feel the Beckoning and the Sabbat still exists aside from the Gehenna Crusaders. Still, it’s a lot to take in if you’re an existing V:TM fan. On the other hand, there’s a lot of fascinating stories to be told and the details of the metaplot are expanded upon in supplements that followed.

Content-wise, the game book has perhaps a little too much in the way of opening fiction and not enough material explaining the origins of the undead as well as their history. The game assumes you know who the Clans are and general details from previous editions, which is a shame. On the other hand, there’s some decent explanations for the science of vampires (i.e. there isn’t any and this frustrates those trying to make sense of magic). The book only describes the original seven Camarilla Clans, Caitiff, and Thinbloods with an absence of the Independent as well as Sabbat clans.

The book does a great job on describing vampiric feeding as well as explaining how it can be an exciting part of the game. Vampires are not literally what they eat with Blood Resonance having you develop new Disciplines and skills depending on what sort of humans you choose to munch down on. It’s much harder to live on a “vegetarian” diet of animals and flat-out impossible for more powerful vampires.

The game emphasizes feeding should be something that players put a lot of thought into because it’s very easy to kill mortals if you’re not careful. Hunger frenzies and battle rages are problems all vampires must deal with. Humanity is now somewhat more forgiving and harder to lose but all vampires are expected to have at least one mortal friend that allows them to maintain a mortal tether (called a “Touchstone”). This will not fit loner Kindred or those who consider humans nothing more than food.

The art in the book is hit and miss for me. On one hand, it’s photorealistic and adds a nice horrifying feel to the subject matter, there’s also some ill-conceived choices like giving each Clan a specific fashion style. It’s a little weird to have vampires have iconic dress sense when the game is about pretending to be human.

In conclusion, V5 is a pretty good edition of the game with quite a few merits as well as a renewed focus on horror as well as moral ambiguity. If you want a horror game where you are the monster, then I think V5 is probably the best edition of the franchise. I also think the game should have included all of the original Clans as well as relied less on in-universe fiction versus a clearer history. Is it grimdark, though? I think the new developers of the line are showing a true appreciation for making the undead scary.