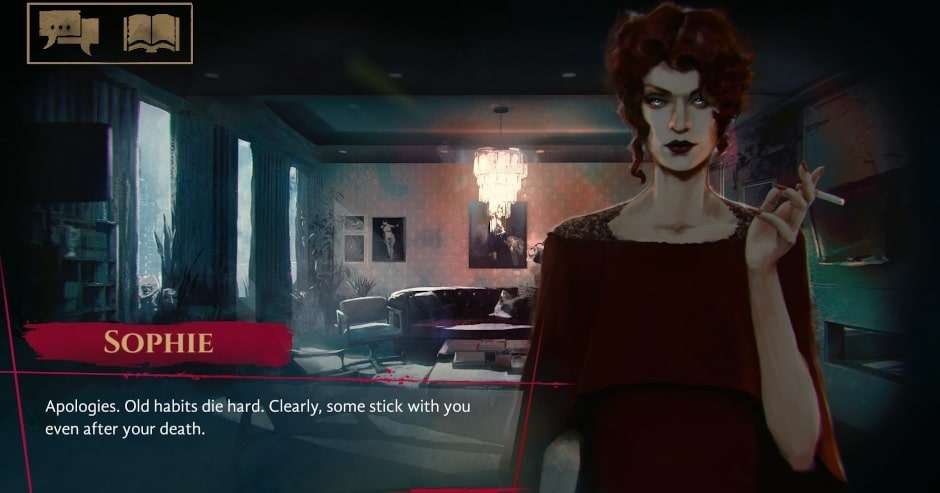 Vampire: The Masquerade: Coteries of New York is a video game set in the World of Darkness and developed by Polish company Draw Distance. More precisely, it is Visual Novel which consists of a “Choose Your Own Adventure”-esque text adventure. Your character is Embraced as a vampire one evening and have a limited amount of time to make a number of allies to help you against both the Second Inquisition as well as your fellow undead. 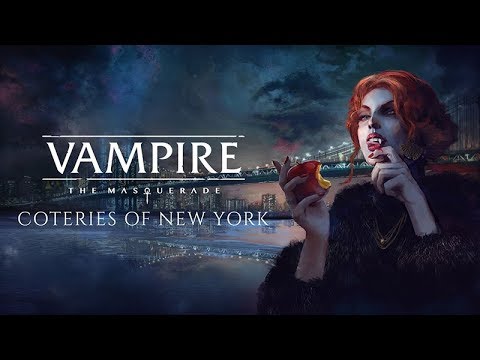 If you’ve played either those or Vampire: The Masquerade: Bloodlines you have a basic idea of how the game world goes: there are vampires, they live among us, they have a complicated royal court, and there’s those vampires who rebel against them. The setting has been updated for the 5th Edition of the tabletop game with vampire hunters actively scouring the city for the undead (albeit under the cover of secrecy like their prey) and any slip ups potentially alerting them.

The game is moody and atmospheric with excellent writing. From the moment you begin the game, you are under the thumb of the Camarilla and they’re ready to kill you for the slightest infraction. In my first playthrough, I got myself killed in the first ten minutes because I played the stereotypical rowdy Anarch. I played much more cautiously afterward and it proved to an interesting experience that reminded me of my own Vampire: The Masquerade tabletop gaming sessions.

You have three choices of Clan in the game with a male Asian American Brujah, a female Ventrue businesswoman, and a black gay male Toreador. This is good diversity to choose from but some fans will be annoyed that there’s no opportunities to play Malkavians or Nosferatu. The lack of customization is a mild annoyance as I really liked the designs and dialogue is mostly the same between them (with the exception of one incredibly racist Anarch Baron). 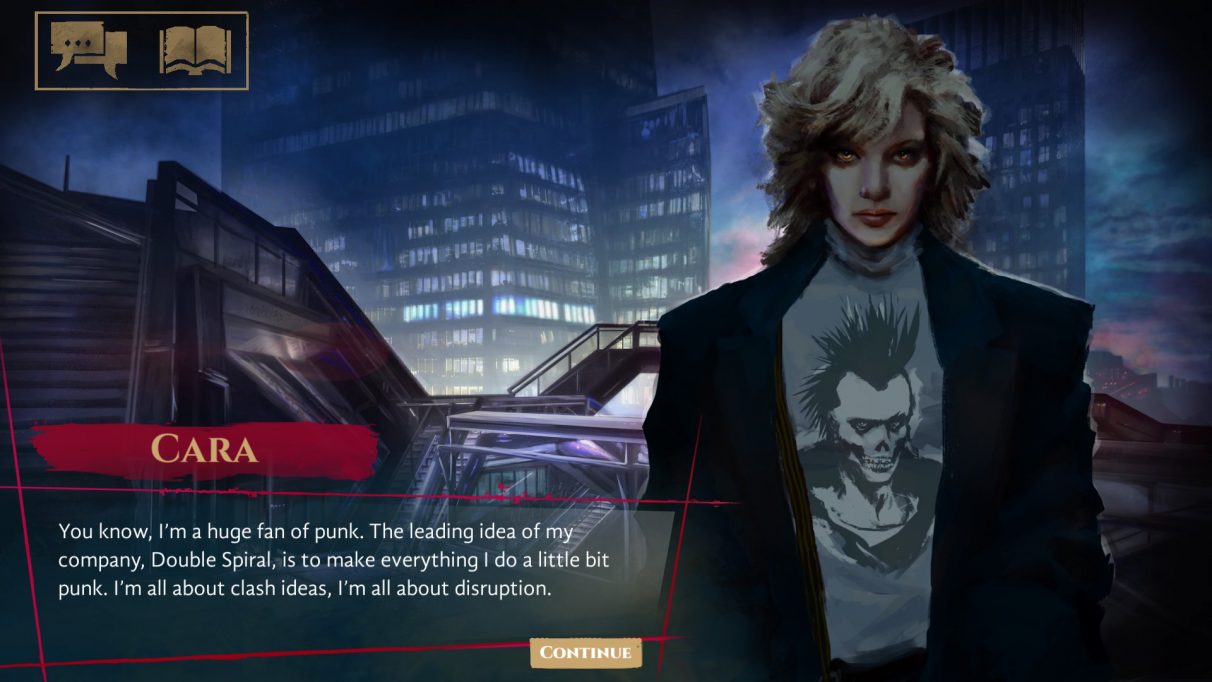 There’s no voice acting in the game but an enjoyable soundtrack, ambient noise, and lots of well-drawn art pieces to add to the text. This was a game definitely made on a budget but it is a perfectly functional visual novel experience. The price was worth it at twenty US dollars but buyers expecting something remotely similar to Bloodlines will be disappointed. They’ll have to wait for the sequel coming out in 2020.

Gameplay-wise, 99% of the game consists of you talking to various characters and making decisions based on your actions. Do you trust this person? Do you act snarky or respectful? Do you kill someone or not? Sometimes you’ll get options to use your Disciplines and they aren’t always the ones your player character should possess.

One interesting game mechanic is your character needs to regularly hunt and feed or they will become a savage wild animal who can’t interact with other characters effectively. The hungrier you get, the more your screen fills with images of blood. Frenzying is represented by an amorphous black blob covering all of your vision. I thought that was very clever and was a far better use of the Beast and Hunger than Bloodlines.

The writing for the characters was very well done and I was especially fond of Hope, D’Angelo, and Sophie. Hope, in particular, is an internet streaming riot grrrl and Malkavian that is just my kind of Gothic Punk heroine. D’Angelo, despite looking too good for a Nosferatu, is a character that I love for being “Miami Vice Noir” in his attitude. Sophie is a typical Toreador elder with smiles and claws in equal measure. The supporting cast is all vividly realized and a lot of nods to the 2001 New York By Night supplement that I and a handful of other gamers remember. I felt the plot was very well done with a complicated double, triple, and quadruple-cross-filled web of undead intrigue. I was disappointed that the game’s ending seems to be somewhat predestined to have one result but I still had a lot of fun. It really manages to capture the paranoia and lies that were central to the game. I would have appreciated more opportunities to work with the Anarchs but that’s a mild disappointment.

Honestly, my biggest complaint about the game is the fact that despite being a text based adventure, it is still pretty hard on the rails. The three character paths are more or less identical with only those you know from mortal life really mattering. I wouldn’t mind this if the fact that the endings don’t allow you to affect matters much either. I felt that, if anywhere, you should be able to affect events there. Gathering a coterie also felt like it would result in a bigger effect than it did, when it actually only impacts a tiny amount of the plot in the end. I would have also appreciated the ability to save at any point rather than having your saves vanish after you finish the game.

In conclusion, I recommend Coteries of New York with caveats. It is not going to be something that breaks the mold for horror gaming everywhere but it might lead to the creation of more of these set in the World of Darkness. It was short, sweet, and a familiar setting that I loved in the 90s (and love now). Keep your expectations within reason, though, as it’s more like being at a tabletop session than anything else. It is available on PC, Xbox One, and PS4. Frankly, I feel this will be better played on a computer as there’s a lot of text to read and my consoles are far away. 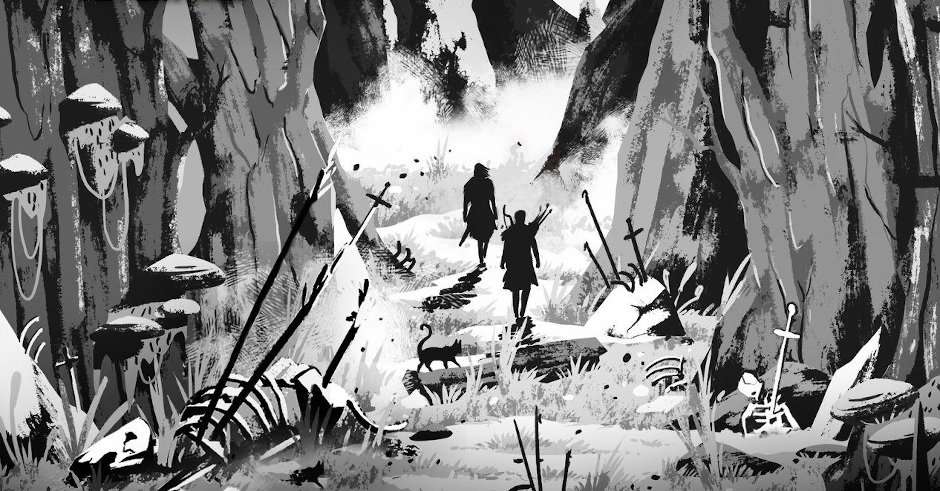 REVIEW: Of Honey and Wildfires by Sarah Chorn

REVIEW: Anna and the Apocalypse by Katharine Turner and Barry Waldo