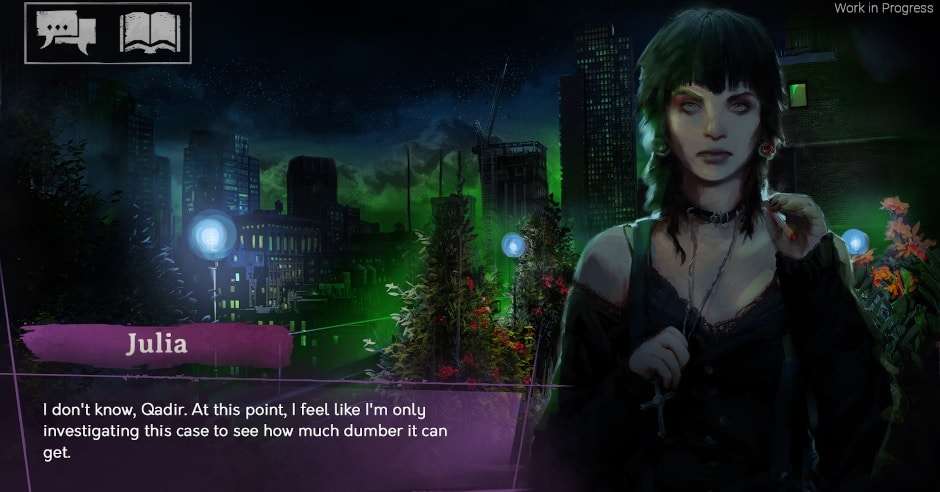 Shadows of New York is the sequel to Coteries of New York that came out last year. It is a visual novel set in the World of Darkness by White Wolf Publishing. A visual novel is effectively a “Choose Your Own Adventure” book that is played on a computer and a bit different from a video game since there’s often no voice acting or much gameplay. Neither game is anything like Vampire: The Masquerade: Bloodlines but I enjoyed the former, so I picked up the sequel when it came out last week. 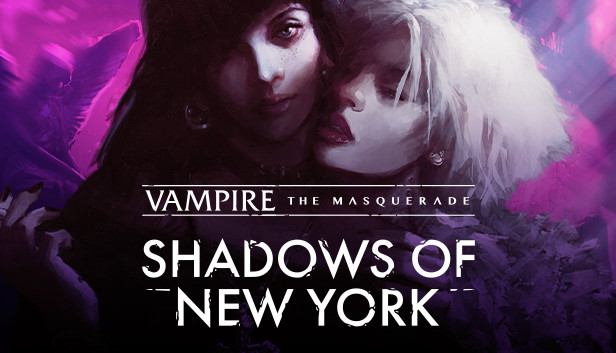 The World of Darkness is an urban fantasy horror setting where the human race lives alongside monsters. Vampires live in the shadows, hiding under fake identities and preying on the marginalized of society. They have conflicts among themselves, with government assassins, and a handful of other threats. Created in the Nineties, it has a strongly conspiratorial theme to it that focuses on the injustices of society and how much of it exists to serve the interests of the super-rich (as well as undead in this setting). Think They Live if they mixed it with Dracula and the Lost Boys.

The premise is Julia, a young reporter working for a once-trendy magazine, finds her life destroyed by forces beyond her comprehension before she is Embraced to become a Lasomra. Lasombra are vampires with superhuman strength, the ability to bend minds, and control over shadows as well as the ability to see ghosts. Julia’s clan is considered the scum of the Camarilla and she is frequently subject to jibes as well as carrying out the worst work of Kindred society. Her only lights in the tunnel are her girlfriend Dakota, a human who loves her, and the Sheriff of New York, Qadir, that considers her a kid sister.

Julia finds a chance to improve her situation for the first time since her Embrace by being assigned to investigate the murder of Anarch Baron Callihan. No one expects Julia to actually succeed in her task and it’s all designed to placate the few followers of Callihan. Julia is smart enough to find out the truth but should she? Is it better to play the game and see if she can parlay the secrets she uncovers to personal power? Is it better to stick to what little morality she has left? The choices are ultimately yours with each decision affecting Julia’s morality meter. At the end, whether she’s a hero or monster will determine your ending.

Shadows of New York benefits from playing Coteries of New York but works as a stand-alone story. It reuses a great deal of assets from that game (mostly art) but also incorporates plenty of new artwork. The soundtrack is excellent, being a sort of pulsing 90s beat that evokes the Goth nightclub atmosphere of the original game. Julia is a fantastic protagonist and oozes personality that makes it enjoyable to follow her adventures. I really liked her relationship with Dakota, her snarky personality, and complicated relationship with both religion as well as her sexuality.

The game deals with the larger concept of truth vs. propaganda. Some individual gamers may find its take on the subject to be politicized or preachy so let the buyer beware. Julia frequently finds that the truth of a subject is less important than the ability to convince people of your version of events. The coronavirus is also addressed in the story, though I don’t mind that since vampires are going to be affected by everyone social distancing as well as shutting down the usual hot spots where they might feed. It’s only a minor element to the story, though.

I have a few complaints about the game, such as the fact that the Hunger mechanic of the previous game is now absent. Blood was always a pressing issue for the Fledgling in the previous game while Julia doesn’t have to ever bother feeding at all in the game. Still, I overall feel like this is a massive improvement over the previous game (and I didn’t dislike it). I wouldn’t mind another adventure with Julia as the star either. This isn’t a video game, though, more of a visual novel and your choices are limited. That isn’t something that bothers me, though, because the story is just that good. 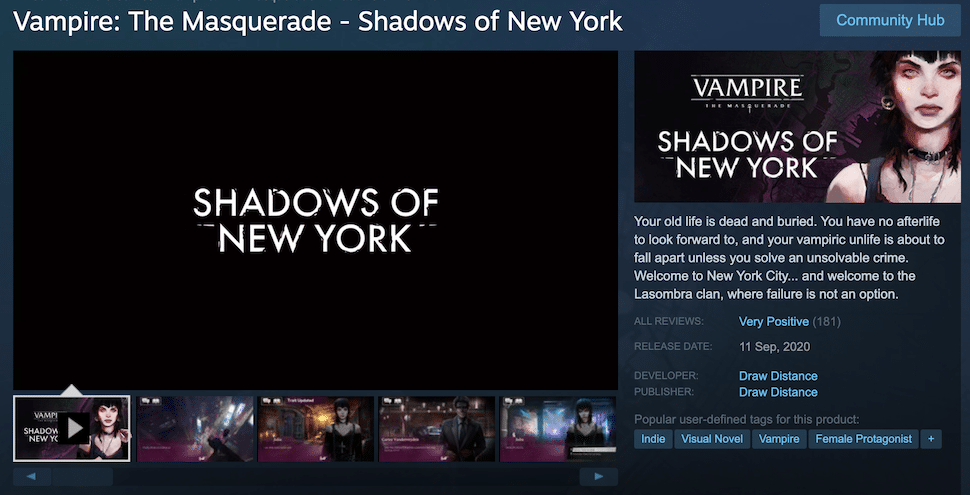