Vampire: The Masquerade is one of the seminal tabletop RPGs, ranking up there with Dungeons and Dragons or Call of Cthulhu for cultural influence among geeks. It created the Gothic Punk setting known as the World of Darkness where vampires secretly ruled behind the scenes, werewolves were eco-terrorists, and mages fought a cosmic war for reality by influencing what humans believed about the cosmos. The World of Darkness vanished from the public eye for the early part of the 21st century but has since returned in full force with Vampire: The Masquerade 5th Edition. 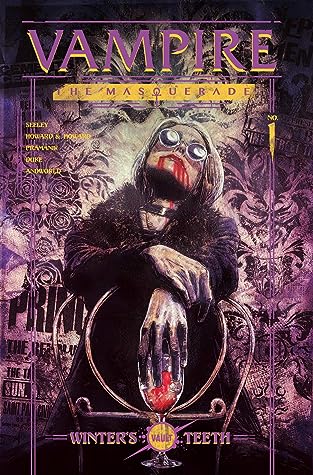 One of the changes for the World of Darkness is the fact that its publishers are making a much bigger effort to diversify the media that it is presented in: video games, visual novels, Twitch streaming, music, and now comic books. Written by veteran horror and urban fantasy writer Tim Seeley along with Tini Howard as well as Blake Howard, it is a book with a surprising pedigree. But can you really put the incredibly dense lore of the World of Darkness into a 35-page comic book?

Surprisingly, the answer appears to be yes.

Vampire: The Masquerade – Winter’s Teeth #1, divides each comic into two separate stories as well as background information presented as RPG information. This is an interesting way to present a comic book, though it does mean each issue is a bit cramped for both. It’s quite impressive that so much characterization is put in the tiny bits of the initial comic there is.

The first half of the comic deals with Cecily Bain, a Brujah traitor to the Anarchs who has since found herself in the service of the Prince as well as Tremere Primogen. Cecily still acts like a Gothic Punk from the Nineties but has betrayed all her past friends to secure her position. She murders the girlfriend of an associate, ostensibly to protect the Masquerade, but also just to vent the frustration that she’s now part of the system. Cecily is an interesting choice for protagonist and really works well for showing the kind of moral dilemmas vampires deal with. 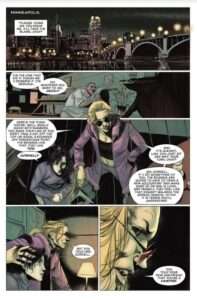 The second half of the series follows a daywalking Thin Blood named Colleen Pendergrass. Colleen was a housewife Embraced by her Gangrel husband after he was turned into a Sabbat shovelhead. She’s now the den mother of a group of Anarchs living on the outskirts of the Twin Cities. Colleen is pretty much the opposite of Cecily and provides an excellent contrast between Camarilla scum and Anarch idealist. How these two characters will interact is something I’m looking forward to seeing.

Devmalya Pramanik, Nathan Gooden, and Addison Duke do a fantastic job with the art as well as colors. The Twin Cities are evocatively drawn and the characters extremely recognizable. It’s realistic without being boring. One interesting fact is the relative lack of fan service. Unlike Bloodlines, which was full of incredibly beautiful Kindred women in revealing clothes, Cecily and Colleen are lovely but dressed like real people might dress outside of a nightclub.

The back of Vampire: The Masquerade – Winter’s Teeth #1 contains an NPC write-up and stats for Cecily as well as Colleen. It gives valuable background information that informs the comic and means that you’ll probably read it multiple times. Fans of the RPG will enjoy this bit of information as it noticeably increases the value you get from the comic as regular game information helps make the price tag more justifiable.

I recommend Vampire: The Masquerade – Winter’s Teeth #1 and I hope it’s a big enough success that it becomes an ongoing rather than just a five-issue trade paperback. Tim Seeley has an excellent grasp of the subtle fight between Humanity and the Beast for V:TM vampires. Rather than focus on world-changing events or big ass explosions, this is a story about characters and is all the stronger for it.