Vampire: The Masquerade the comic is a new series by Tim Seeley and published by Vault comics that is set in the World of Darkness setting. The World of Darkness is the setting for classic roleplaying games Vampire: The Masquerade, Werewolf: The Apocalypse, and Mage: The Ascension. I really enjoyed the first issue and was eager to see if they could continue the mixture of politics, horror, guilt, and violence in Winter’s Teeth #2. 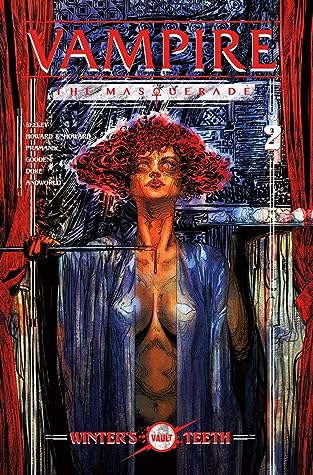 The premise of the first arc, Winter’s Teeth, is divided into two arcs. The first arc is Cecily Bain, a former Anarch, has become a servant of the Camarilla to guarantee her freedom. It has cost her self-respect and morality, though, leaving her as nothing more than the Prince’s minion. The second arc follows Colleen Pendergrass, Anarch Thin Blood, as she struggles to care for her misfit band of fellow undead.

Vampire: The Masquerade – Winter’s Teeth #2 introduces us to the arrogant sun goddess-esque Prince of the Twin Cities. Prince Merraine has ruled Minneapolis and Saint Paul for almost a century but has grown lax in her rule. She’s more interested in her art and cityscapes than putting down the dissent brewing around her. She’s also blind to the fact Cecily is trying to pass off a newly discovered Caitiff, Ali, as her childe.

The best part of the issue is Cecily taking Ali on her first hunt. Cecily attempts to impart a lesson to her childe that it is not good to make yourself judge, jury, and executioner of mortals as a Kindred. Unfortunately, Cecily has lost touch with her humanity and the lesson is not only confused but insane to poor Ali. I think this nicely captures how vampires can become confused about morality and struggle to relate to more “normal” Kindred.

Colleen’s situation is almost the reverse as she has a good head on her shoulders but is herding cats with her coterie of self-pitying Anarchs. Unfortunately, her husband Mitch is the worst of the lot and can’t control his hunger around mortals. This all comes to a head with hunters tracking them down and mistaking Colleen for a human servant.

In Vampire: The Masquerade – Winter’s Teeth #2, we’re getting a sense of who the villains for this arc are with increasing hints there’s something not right with Ali as well as the fact that the Second Inquisition is moving in on the Twin Cities. There is an air of conspiracy to the events and it fits well with the intrigue-heavy atmosphere of the tabletop game. Both protagonists are growing on me, though Cecily is the more dynamic of the two with her being, well, evil, as something that is a bit more interesting in a protagonist than Colleen’s inherent decency.

The artwork remains fantastic for this series and I recommend checking out the alternate covers of the physical copies, since they’re the kind of things I’d want to hang on my wall. This is shaping up to be rapidly one of my favorite comics in the past two decades and I really hope this ends up being an ongoing series.