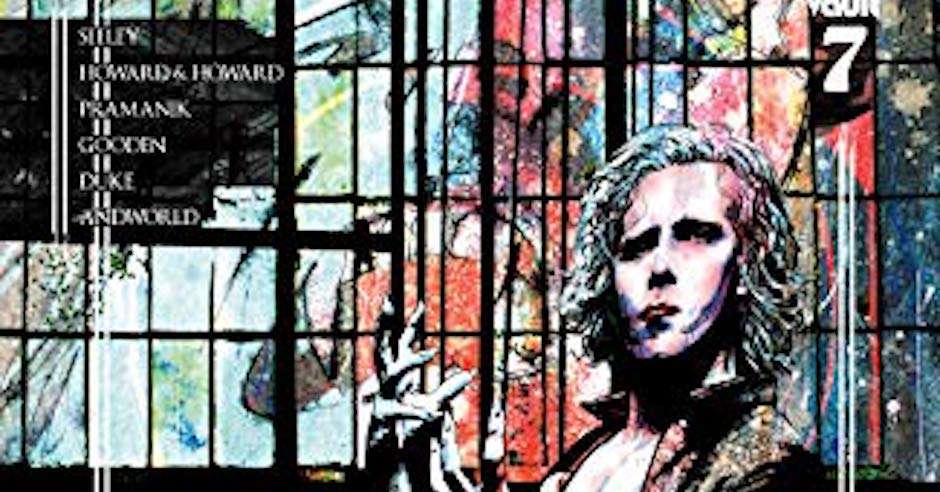 Winter’s Teeth #7 is the seventh issue (fancy that) in the adaptation of the tabletop roleplaying game, Vampire: The Masquerade, to comic format. The comic follows the adventures of Cecily Blake, a former Anarch turned Camarilla enforcer as she deals with the fact she’s betrayed everything in her life to look after her ailing sister. Unfortunately, her sister has developed incurable dementia and she finds herself dealing with the consequences of her decision. 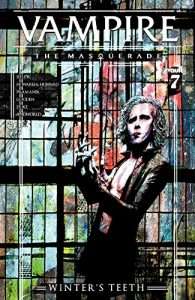 One of those decisions was to adopt orphaned Cainite, Alejandra, who was found confused and wandering through the Twin Cities without any knowledge of the supernatural. Or so it seemed. Since her introduction, Alejandra has been hiding the secret of being a vampire hunter turned into one of the undead. However, unlike most hunters turned undead, becoming a vampire has not impacted her quest to destroy them. Or has it?

In Winter’s Teeth #7 Cecily finds herself unable to decide what to do about the possibility that she is hiding a Fifth Column agent in her midst. Thus, she sets about to try to find proof of her suspicions one way or another. Before then, though, she leaves Cecily in the hands of her frenemy, Calder Wendt, who wants Ali for her ability to resist mental domination. Calder is about to become Prince of the Twin Cities but must first be approved by a Justicar. Calder is unable to hide how terrifying he finds this prospect and is going out of his way to provide the visiting dignitary with every possible luxury.

I won’t spoil Winter’s Teeth #7 for readers but I think that if they continue to incorporate horrifying displays of vampirism like they included in this book then it will quickly win over its detractors. The book has been a bit on the tame side so far so seeing vampires “play” with their food the way they do in this book is something that helps highlight them as monsters. The ending was a bit silly as they keep trying to portray hunters as even more deranged and evil than the undead, which I just don’t see. Still, I am looking forward to seeing what happens next.

In conclusion, Winter’s Teeth #7 is another solid issue of the series. There’s another side story in the back, detailing Colleen adjusting to life in Minneapolis. Colleen is a Thin Blood without many of the hang ups of Cecily or her fellow undead. Here, she finds out about Thin Blooded Alchemy that has the potential to change her from being the weakest of her kind to someone actually capable of affecting meaningful change. I’ll be interested in seeing where that plot goes. As always, the writing is top notch and the art is excellent.