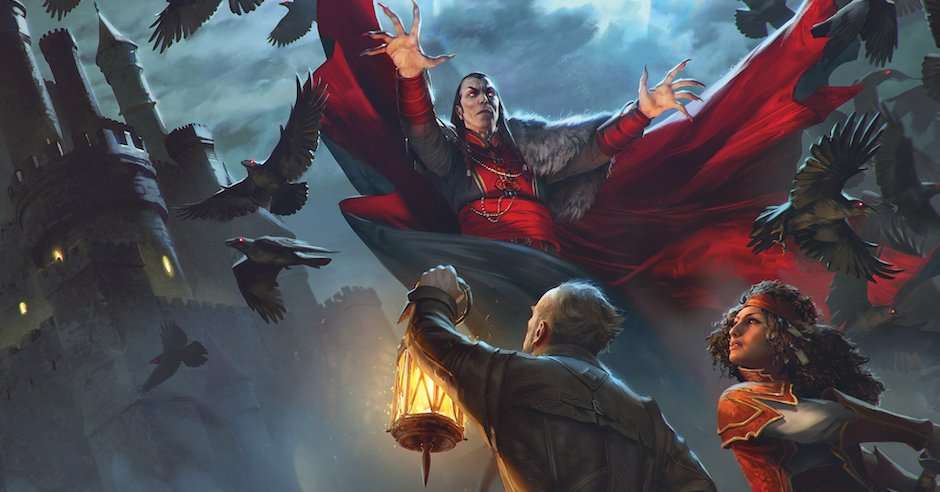 Van Richten’s Guide to Ravenloft, the latest Dungeons and Dragons 5th edition supplement, takes players and gamemasters on a journey through the gothic fantasy Domains of Dread. Presented as a campaign handbook to this misty and macabre sub-dimension of the Shadowfell, it includes new character creation options, Ravenloft lore and setting customization tools, tips for using various subgenres of horror at the table, and some thematic additions to the Monster Manual. To those unfamiliar with the setting, this supplement is fantasy in the vein of Netflix’s Castlevania, Magic: The Gathering’s Innistrad set, and the Van Helsing and Dracula Untold movies. While this book does focus on the same realm (and beyond) that the popular 2016 Curse of Strahd campaign does, it’s not a sequel and reading/playing Strahd is not necessary (though it’s an amazing module and well worth playing). 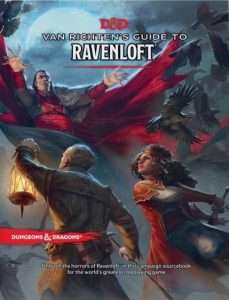 After a neat introduction with some epistolary content to and from monster hunter Rudolph Van Richten himself, the book launches into spooky character creation options. These include new playable races like the undead reborn, the semi-vampiric dhampir, and the hag-influenced hexblood as well as a new bard and warlock subclass. My favorite bit of this chapter is the ‘Dark Gifts’ mechanic it introduces. Players can gain these double-edged powers through Faustian bargains, familial curses, or similar events, and each offers potentially great fodder for roleplaying. One cool Dark Gift, for instance, is ‘living shadow,’ where a character’s shadow becomes an independent entity that’s both helpful to the PC and a potentially sinister being with its own agenda that’s always following closely behind them. While the material in this section is top-notch, it does feel a little skinny since it contains nearly all of the player-oriented content in the book. With the following chapters focusing more on dungeon masters, players might find themselves wanting a little more to justify the $30-$50 price tag of this book, and I feel like there was room here for an extra subclass or two or some new Ravenloft-based spells or feats.

Chapters two and three make up the manticore’s share of the book, and both focus on worldbuilding. The former is a toolkit for dungeon masters to design their own demiplanes in Ravenloft, and the latter is a breakdown of 20+ established Domains of Dread. These sections are significantly more fluff than crunch (no special statblocks for Darklords if any DMs were hoping for them), but they’re definitely my favorite portion of the book. Both chapters employ subgenres to great effect, giving tips for DMs using cosmic horror, folk horror, dark fantasy, etc. in their own worlds and tagging iconic sub-dimensions of Ravenloft with the same tropes. Some Domains in chapter 3 that particularly stood out to me were Bluetspur (an alien abduction-inspired plane of mindflayers toiling in city-labs and serving a decaying God-Brain), Falkovnia (a disaster horror plane ruled by a ruthless mercenary general whose lost soldiers, slain foes, and slaughtered innocents return eternally in an undead horde), and Lamordia (a steampunk Frankenstein-inspired word of body horror and immoral experimentation). If you’re running a Ravenloft campaign (and this book definitely made me want to), this information is invaluable. If your game takes place in another setting, it’s still a fun read for anyone interested in inventive dark fantasy worldbuilding, and a lot of the concepts presented here could be chopped up and reused by any DM with a taste in the macabre.

Chapter four focuses on running horror adventures and opens with pre-session tips on setting player boundaries/expectations, creating atmosphere, and using tension and pacing. The section also offers more mechanical horror tools like new rules for curses, haunted traps, an alternative fear/stress system, and creating powered-down ‘survivors’ (temporary and oft-doomed character stand-ins focused on survival rather than heroism). The chapter finishes out with a ready-to-play adventure called the “House of Lament” that can act as the first chapter of a Ravenloft campaign and has a really cool “Cask of Amontillado” flavor. The module seems like a great introduction to a longer game in the Domains of Dread or a Halloween one-shot, and the Darkest Dungeon player in me especially appreciates the updates this chapter offer to the fear/stress system first presented in the Dungeon Master’s Guide.

Chapter five wraps up the book with a menagerie of new creatures native to Ravenloft and their accompanying statblocks, as well as their background lore and tips for making horror encounters genuinely scary. This chapter presents some neat variations on classic monsters (living dolls, the vampiric nosferatu, the lycanthropic loup-garou, etc.) as well as some that are new to 5e. One encounter I’m keen to run at my own table is the Nechrichor–a malevolent sentient ooze made from the sludge of an aborted lich or the foul ichor of a dark god.

In summary–is this particular D&D 5e supplement for you? If you’re a dungeon master running a horror or dark fantasy campaign in Ravenloft or a similar homebrew setting (and I imagine man