Vultures is a stark fantasy, stunning in its ability to draw the reader in. Dark and brooding, it is definitely not a happy story, but it is fascinating. To me, if felt like most of what happened was really a device used to explore or explain inner torment, as opposed to the inner torment being just a byproduct of the situation, if that makes sense. Speaking with me, Luke Tarzian described Vultures as being, “very much a story about love, loss, grief, and mental illness through the eyes of reluctant heroes”. There is no way I could possibly describe the atmosphere of the book better than that. I very much love seeing real issues like mental illness or grief explored in a fantasy setting, and I was impressed with the rawness of this book. 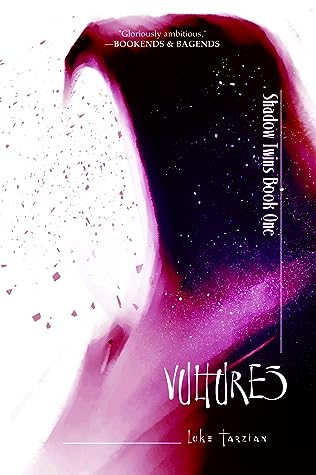 The plot itself seems simple enough: in order to end a scourge of death and destruction caused by the slain demon Te Mirkvahil, one man looks to reforge a sword with the power to end things once and for all. However, add in multiple characters, pulled strings, and twists in events, and suddenly what seems like a point A to B storyline becomes something much more complex.

The story was told through several points of view and it was interesting to see how (or if) the characters’ storylines crossed, or what the connections were. My favorite character was Theailys An. He would have blackouts and he would remember nothing of what happened during them (although violence was generally involved). It made for fascinating character development.

The world itself was incredibly well developed. There is a ton to this world, and this is a book that very much needs the reader’s full attention. The writing was evocative and made my imagination work overtime. At times, it felt like I was reading someone’s nightmare. It was an uncomfortable but engrossing feeling.

You won’t find rainbows or happily-ever-afters in Vultures. Instead, you’ll find an incredibly well-crafted tale, one that will stay with you long after the last page is read. If you like harsher fantasy-and I mean really harsh-give this book a read. Luke Tarzian is a writer with vision and a great deal of skill.