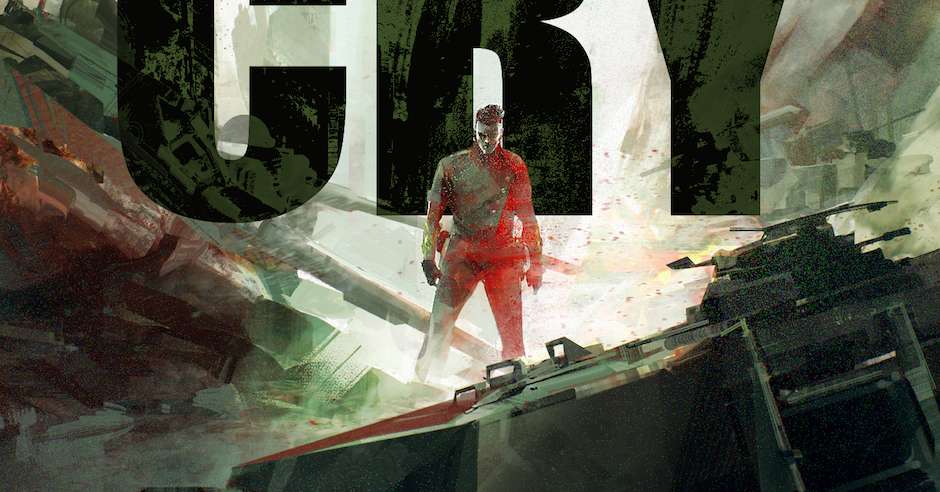 War Cry is the new novella by Brian McClellan (The Powder Mage Trilogy), continuing the Tor.com series of shorter-than-novel-length fiction that has also included familiar names like Martha Wells and Myke Cole. It’s a wicked fast-paced story that takes place over a couple of days, perfectly utilizing this short format. Despite its compact length it still manages to develop some emotionally moving character relationships, a vivid setting, tricky plot twists, and some interesting magic and monsters. At 112 pages, it’s a book that can be read in one sitting, and then probably reread in the same sitting if you’re a fast reader like I’m not. 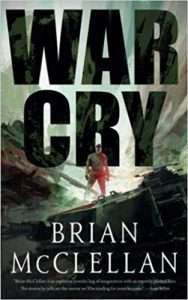 Set in an all-new story world, War Cry tells the tale of Teado and his platoon in their battle against an unknown ‘enemy’ in a war that always seems close to won but never actually ends. Teado’s platoon has been hunkered down in the Bavares high plains for years, plaguing the enemy with little sabotages and skirmishes, but supplies are getting scarce and they must do something radical to stay effective and alive. Joining Teado are Aleta, a good woman and sure shot; Giado, their tough but compassionate commander; Bellara, a Smiling Tom wizard; Rodrigo, the pilot of their one small airplane; and a few others. In addition to the plane, the platoon is equipped with guns, grenades, and some motorbikes. But if they don’t get some food and other supplies soon, they’re done for.

Propelling this narrative at lightning speed is the first-person narration by Teado. Teado tells the story as he experiences it, not only intimately, like only first-person can achieve, but also immediately, using the present tense. It’s a combination that thrusts the reader into the action and pushes relentlessly through to the end, giving the reader the feeling of riding through an intense video game. I’ve read in McClellan’s bio that he’s a videogame addict, and it shows here in the way the action never lets up and the intensity is constant, even when Teado must replenish his health, to use a videogame term. I’m not a gamer—I like videogames but I like my guitar more—but I definitely enjoyed the rush of adrenaline the narrative provides.

In addition to narrating the story, Teado is also a Changer. He can wilfully change himself into an almost unbeatable lizard-humanoid for extra strength, night vision, endurance, etc. It’s similar to a temporary burst of power that is often a feature of videogames. Some of his enemies are also Changers, which makes for some powerful and gory fight scenes. Other elements that lift this story from war drama into SFF are the Smiling Toms, like Bellara. Smiling Toms can magically create illusions that mask where the platoons are hiding, hide Rodrigo’s plane in flight, and basically provide illusionary cover for tactical operations. Last and possibly least, since they don’t make an actual appearance in this short tale, are the Fire Spitters, who presumably spat fire, but are now all dead. Nevertheless, there’s enough magic, monsters, and mayhem here to please discerning fans of SFF.

There’s also plenty of fighting, clawing, bombing, falling out of airplanes, falling off motorbikes, jumping on grenades, etc., to please the fighting fantasy crowd. The action is fierce and unrelenting, suitable for the compact format. It does, however, take some pretty strong suspension of disbelief to be given Teado’s play-by-play of every gashing talon swipe, bullet spray, and rifle butt to the face in real time present tense, but we’re SFF readers so we likely can make the jump into Teado’s mind without a problem, at least I could.

Thematically, War Cry deals mainly with loyalty and sacrifice. Teado is willing to die to keep his platoon from disbanding or worse, perhaps starving, and his compadres are willing to do the same. However, adding a lot a complexity to this conventional hero story is that the enemy is basically unknown and the characters often wonder if the people they are trying to kill are any different from themselves. Interestingly, several of Teado’s platoon mates agree that the enemy’s music, that they clandestinely listen to on the propaganda networks, is better than their own. And several of the characters wonder if they wouldn’t be better off just surrendering and making a new life on the other side. This ambivalence drives some of the big plot twists that take place near the story’s climax, which make for a compelling story even if it requires some exposition at the end. But this situation, endless war against an unknown enemy, also reflects today’s global war clusterfuck, especially for me as an American. Why do our governments continue fighting these endless wars in faraway places that most Americans couldn’t find on a map to save their own lives? War Cry left me with these types of compelling, lingering questions that make for intelligent, resonant fiction.

But is it grimdark? We at GdM have resigned ourselves to let you decide since the definitions of grimdark seem to be individualistic and varied. To me, however, I found War Cry to fall into my own category of grimdark because Teado doesn’t really know whom he’s fighting or why. He doesn’t know and rarely contemplates if he is on the right (or moral) side of history, as we sometimes say. He fights to stay alive in system that is nebulous at best, entirely broken and corrupt at worst, but he doesn’t even know which. So, yes, I call this grimdark, and although War Cry didn’t blow me away, I enjoyed it very much, was thoroughly entertained, and I think GdM readers should definitely pick this one up. Recommended.