Warhawk is the sixth (of eight) in the Siege of Terra series and 60th Horus Heresy novel in Black Library’s ongoing marathon exploring and expanding the foundational myth of the Warhammer 40k universe. 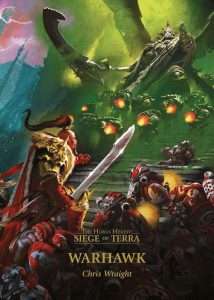 As such, as much as I enjoyed this book, I have to say that this is not a jumping on point. To start with the series, go all the way back to Horus Rising and work your way forward, with the background of the White Scars specifically set up in the previous novels by Wraight, Scars and Path of Heaven.

That fair warning out of the way and assuming you’re mostly up to date with the series, let’s continue.

In a series of incredibly cinematic books, Warhawk is one of those I’d most like to see given the full motion picture treatment. I don’t want to spoil too much, but if you can imagine Independence Day with the Ride of the Rohirrim meets but with motorbikes and tanks going on underneath, you’re pretty much there. There’s also a section where a White Scar is riding his motorbike around the besieged imperial palace and his internal monologue is peppered with descriptions of what he can see and it’s one of the most comprehensible depictions of the scale of the palace and the conflict that I’ve yet read.

As much fun as the big action sequences are, they are made meaningful by the context of what’s gone before, the sense of rising tension that carries through the personal stories of this book and the wider series as a whole and the personal interactions that give heart to all the violence.

Here we see Jaghatai Khan, the titlar Warhawk, so long contained in a style of war he loathes cutting loose, and the White Scars legion getting their Big Moment of the series. We see the culmination of the character development of the Death Guard, their fall to the service of the plague god and the tension between Primarch Mortarion and First Captain Typhus. We see how the pressure of the siege is playing on the praetorian, Rogal Dorn. We finally see Sigismund unleashed.

One of the most significant, but subtle plot points of Warhawk is that this novel feels like a tipping point between the Imperium that could have been and what we actually end up in the ‘modern’ 40k setting as the Imperial Truth fades away and the faith of the Emperor as a deity takes over.

Of course, as is the case with almost all of the best Horus Heresy books, you come for the big moments between Primarchs and Space Marines doing violence, but what really hooks you is the human stories that give you a more relatable perspective on the conflict and whose heroism is so much more on account of their relative squishiness.

From the ageing logistics officer arranging the materiel for the Primarch she loves to the cobbled together tank crew riding into hell with remarkable good humour and the despairing commander who gets a chance to take his mothballed ship into a glorious final run, there is a sense of heart and defiance.

That’s the core of Warhawk. Jaghatai Khan and the White Scars were always supposed to laugh as they fought, the joyous warriors who rode like the wind and smiled as they did it. They’ve never really had the chance in this series, being manipulated and boxed in and ultimately set against the force that best exemplifies despairing attrition in the Death Guard.

Warhawk is the third last novel in this series and as such, we’re pretty much at the lowest moment. From a galaxy spanning empire, the Imperium is reduced to one city, besieged by an innumerably superior foe and seemingly doomed.

Into that setting, Jaghatai Khan decides he’d rather charge out and bloody the nose of the traitors, to maybe make relief possible if their allies can arrive and if not, to go out gloriously rather than sitting behind walls waiting to die. People follow him, and they ride and fight and smile in the face of impossible odds. The very personification of the defiance of human spirit against despair. This is the grimdarkest world imaginable, but let’s charge into the teeth of hell while we still can. I love it.

I’ve barely even touched the other treads pulling together the stories of Valdor, Erebus, Sigismund, Keeler, Loken and so on but it’s all tied together quite beautifully by Wraight,

Warhawk is a masterful work, because it’s not easy to tell a story that feels satisfying and self contained while weaving in a bunch of other threads and leading to an conclusion that comes in another book (likely helmed by another author.)

Warhawk leaves me satisfied that it’s core protagonists have had their big moment and a bit wrung out emotionally but breathless because I know what comes next. Old 40k lore tells me we have at least two (well three, but two are sequential and in the same place) Big Duels left, and two books to go.